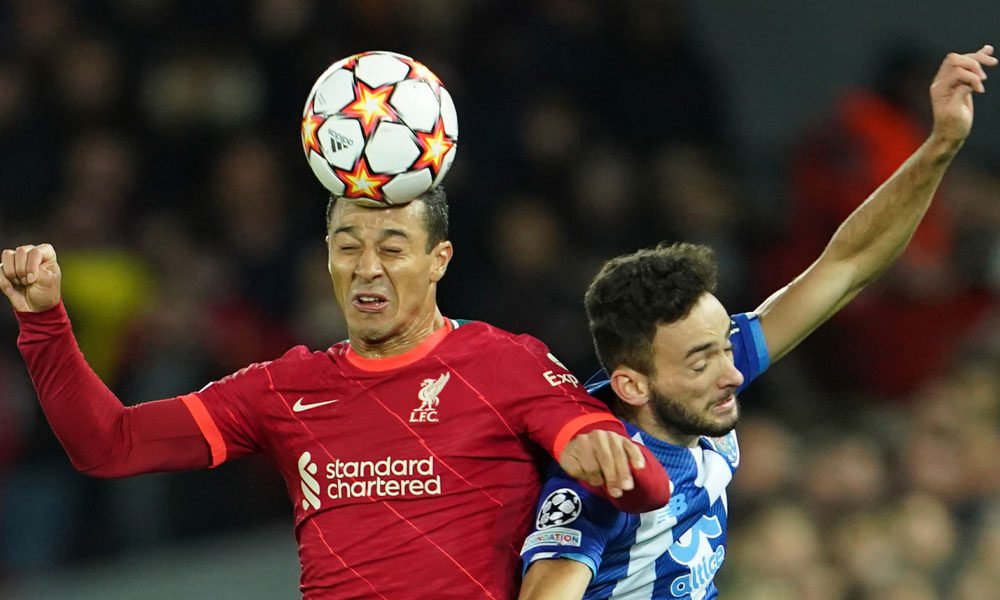 Porto did not take advantage of Atlético de Madrid’s stumble, which fell 0-1 against Milan, and must win the Spanish team on the last day if they want to win the ticket for the knockout stages of the Champions League, after falling by 2-0 against Liverpool, in a match in which the Portuguese team paid for their lack of punch with defeat.

A problem that the English team lacked, which despite being overcome during most of the match by the Portuguese team, showed its forcefulness against the rival goal with the goals of the Spanish Thiago Alcántara, who opened the scoring at 52 minutes with a sensational shot from outside the area, and the Egyptian Mohamed Salah, who closed the local victory in 70 with a beautiful maneuver inside the area.

Aware that a victory would allow them to reach the last day, in which they will receive Atlético de Madrid at the Dragao stadium, with an advantage over the rojiblanco team, those of Sergio Conceicao came out from the beginning ready to storm the Anfield stadium.

With the lines advanced and aggressive in the pressure, Porto did not take long to disturb the goal of Brazilian Alisson Becker, who saw Iranian striker Mehdi Taremi touch the goal in the first minute after playing defender Joel Matip.

You can also read:  Conflict between FIFA and UEFA intensifies

A warning of the intentions of the “dragons” that two minutes later, in the nine, returned to bring danger to the Liverpool area in a boarding school by the Brazilian Evanilson.

Although the clearest opportunity for the Portuguese team came in the eleventh minute in a brilliant counter led by Taremi that Otavio could not finish on an empty goal, after seeing how the Greek defender Konstantinos Tsimikas in his desperate sprint managed to touch the ball before the Porto player could set up the shot.

Occasions that reflected Porto’s initial superiority over Liverpool, which with the classification already assured and as group winners, left key players such as the Dutch central Virgil van Dijk and the Brazilian midfielder Fabinho on the bench.

But if Jurgen Klopp’s men missed the presence of two key pieces in their defensive network in attack, the presence of Egyptian Mohamed Salah and Senegalese Sadio Mané was a constant threat to the Portuguese defense.

As it was clear at 37 minutes in an action by Mané that ended in a goal, although he did not get on the scoreboard, after confirming the referee with the help of video refereeing that the Senegalese was in an illegal position.

You can also read:  Casemiro: «Messi is a great loss for the classic»

A scare from which Porto recovered five minutes later in a new action by Otavio, undetectable at all times for the English defense, who filtered a magnificent pass to the Iranian Taremi, who with everything in favor to finish off, decided to look for a teammate by wasting a magnificent opportunity.

Anticipation of what would happen in the opening minutes of the second half in which the Portuguese had two good chances to go ahead on the scoreboard with a header from Taremi and, above all, in a shot at the turn of the Colombian Matheus Uribe after a lateral free kick that went wide for very little.

A lack of success that Porto did not take long to pay, as Liverpool opened the scoring (1-0) in the 52nd minute with a spectacular long shot from Spanish midfielder Thiago Alcántara.

Quite a blow for the Portuguese team, which despite the fact that it continued to try through Otavio and the Colombian Luis Díaz, who left the odd brushstroke of the immense talent it treasures, barely disturbed Liverpool’s goal again.

This dynamic was accentuated with the departure of Jordan Henderson, who shielded the core of the “reds” and Scottish side Andrew Robertson, who put an end to the problem that Otavio’s incursions into the right wing had posed until then.

A defensive solidity that did not diminish the forcefulness of Liverpool that definitively sentenced the contest at 70 minutes with a goal (2-0) from the Egyptian Mohamed Salah, who scored his sixth goal in the maximum continental competition, with a beautiful maneuver inside of the area.

Scoreboard that will force the Portuguese team to beat Atlético de Madrid at the Estadio do Dragao if they want to stay alive in the competition, although a draw could be enough for the Portuguese, as long as Milan does not manage to beat Liverpool, which counts their matches for victories.

Referee: Felix Zwayer (GER). He showed Konaté and Milner a yellow card for Liverpool; and to Uribe, Mbemba for Porto.

Incidents: Match corresponding to the fifth day of group B played at the Anfield stadium in Liverpool (United Kingdom).