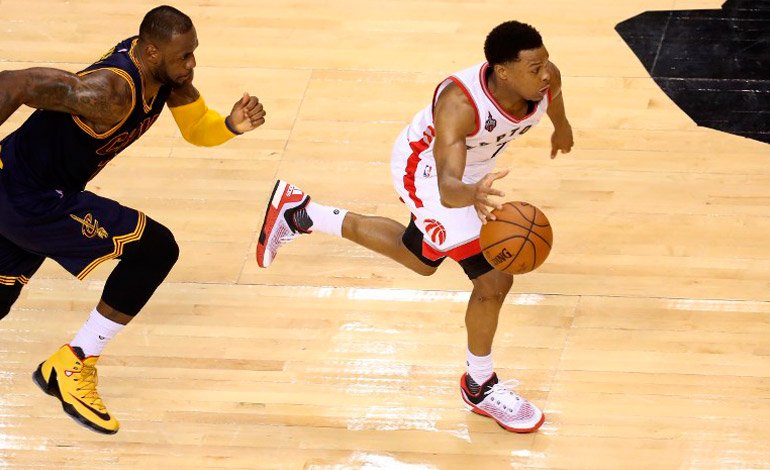 The duo formed by point guard Kyle Lowry and shooting guard DeMar DeRozan once again imposed their scoring efficiency and the Toronto Raptors beat the Cleveland Cavaliers 105-99 in Game 4 of the Eastern Conference finals, which are now tied at 2 -two.
Game 5 of the best-of-seven series will be played next Wednesday at Quicken Loans Arena in Cleveland, ensuring that the competition will return to Toronto for Game 6.
Lowry broke the Cavaliers defense again with his penetrations and shots from outside the perimeter to get 35 points, including a basket from inside the paint that he made in the final minute that ensured the definitive advantage of the Raptors, who had left snatch an 18-point lead.
The Raptors’ star point guard once again played a great game and in the 44 minutes he was on the court at the Air Canada Center in Toronto, he scored 14 of 20 field goals, including 4 of 7 triples, and 3 of 4 from the line. personal.
Lowry also grabbed five rebounds – four were defensive –, gave five assists, recovered three balls and lost two.
“We said we were a team that didn’t give up and we showed it on the pitch,” Lowry said at the end of the game. “Now what we need is to focus on what we need to do well in Cleveland come Game 5.”
Lowry also had words of praise for the Congolese center Bismack Biyombo, who was in charge of marking the Cavaliers’ star forward, LeBrown James, who continued not to be a winning factor within the team.
“Biyombo did a great defensive job on James and everything on the field, which helped us get the win,” Lowry acknowledged.
While DeRozan also maintained his status as the Raptors’ leading scorer by contributing 32 points on 14-of-23 shooting from the field, and was perfect 4-4 from the free throw line.
Forward DeMarre Carroll also scored 11 points and was the third Raptors player to have double-digit numbers and was the only other player along with Lowry and DeRozan to have double-digit numbers.
Biyombo was once again a defensive wall inside the paint and imposed his physical power by getting five points, 14 rebounds -11 defensive-, he gave an assist and made three blocks.
The Argentine international power forward Luis Scola was once again the starter and in the 14 minutes he played he left scoreless after missing the only field goal he made, which was a triple, and he recovered a ball.
As a team, the Raptors shot 54 percent (42-78) from the field and 32 percent (7-22) from 3-point range, compared to 47 percent (39-83) and 32 percent (13-41), respectively. , of the Cavaliers who won the duel under the hoops with 38 rebounds to Toronto’s 35, who put the record for games played in the playoffs at 8-2.
Forward LeBron James with 29 points, nine rebounds and six assists led the Cavaliers’ attack, while point guard Kirye Irving reached 26 points, but they could not avoid the second consecutive loss, the first time since they lost the last three games. of the 2010 Eastern Conference semifinals against the Boston Celtics.
Reserve power forward Channing Frye contributed 12 points, including nine in the fourth period, but his defense could not contain the actions of the Raptors’ attack, which took advantage of the Cavaliers’ scoring inconsistency.
The Cleveland team scored only 3 of 22 three-point attempts in the first half, until in the third they recovered the success with three consecutive baskets from outside the perimeter and concluded it with six of eight.
Power forward Kevin Love was still not a winning factor, contributing only 10 points after making 4 of 14 field goals, including 2 of 7 three-pointers, capturing seven rebounds and giving three assists.
Love disappeared during the first half and when he wanted to emerge in the second, his effort helped the Cavaliers overcome a deficit of 18 points, including nine with which they reached the end of the third period (78-69).
The Cavaliers looked for a comeback by scoring 6 of 8 triples in the third period, and in the fourth with less than five minutes to go they took the lead 89-93.
But the Raptors emerged again with the decisive goals scored by Lowry and DeRozan that put them squarely in the fight to be in the NBA Finals.EFE

You can also read:  Harden and Westbrook do their thing again in the NBA