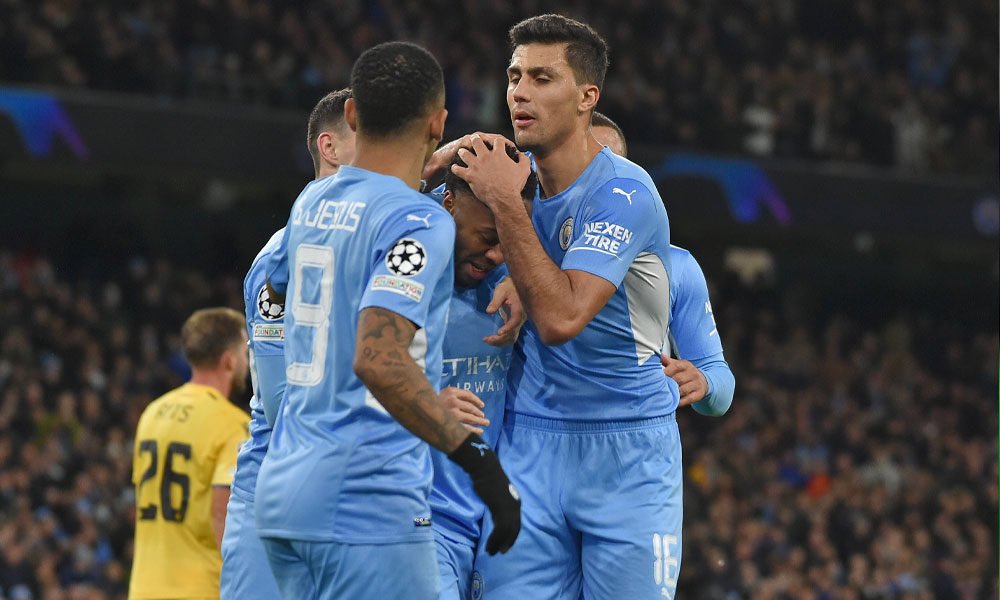 Manchester City took a step towards the knockout stages of the Champions League after winning 4-1 at Club Brujas, which could not stop the good overall game of a team in which Bernardo Silva was the engine, Joao Cancelo a server of luxury with three assists and Phil Foden, Riyad Mahrez, Raheem Sterling and Gabriel Jesús the scorers of the night.

After losing to Crystal Palace in the Premier League (0-2) last weekend, the team led by Pep Guardiola needed to regain sensations to get their qualification to the round of 16 of the top continental competition on track. A victory brought City very close to the next phase.

Guardiola went for the points with three changes from his last defeat. He removed Belgian Kevin De Bruyne, Brazilian Gabriel Jesús and Portuguese Rúben Dias from the eleven to use German Ilkay Gündogan, John Stones and Algerian Riyad Mahrez.

The City, with their new faces, enjoyed more fluidity in the game. Gündogan brought more control, Mahrez more electricity and other names like Bernardo Silva and Joao Cancelo stood out above the rest. Both of them scored a great game. The first, in containment work. The second, he gave a recital with constant arrivals to the bottom line from the left side.

You can also read:  Real Madrid adds another positive of Covid-19

But in front of them they had an uncomfortable team that needed to win yes or yes to maintain their hopes of continuing in the Champions League. Club Brugge, who lost 1-5 in the first leg, was not going to be beaten easily and held out until the second half.

In the first, after 25 explosive minutes from City, Foden was the first to score. He did it thanks to a double play by Joao Cancelo, who first encountered the stick in an attempt from outside the area and then, in the prolongation of the play, assisted his teammate, who finished off the first goal of the duel at will.

City’s dominance took a break two minutes later with an unfortunate play by the Stones, scoring an own goal. First, Hans Vanaken ran into Brazilian goalkeeper Ederson, and then, on the rebound, Stones slammed the ball into his goal after a Charles De Ketelaere cross that hit his head.

You can also read:  A record-breaking Cristiano saves Portugal

After that initial arreón, the City lowered its arms, the Club Brugge lived calmer until the break and then had to endure the whirlwind of Guardiola’s men, who left the locker room unleashed by the game.

Initially, Simon Mignolet had to work hard to support the Club Brugge. The Belgian goalkeeper got a shot from Mahrez and a header from Stones. However, in the end, he could not with a point-blank header from the Algerian, who in the absence of half an hour put the 2-1 on the scoreboard with another assist from Joao Cancelo.

The second goal for City finally ended Club Brugge. There were no signs of reaction. The domain became complete for the English team. We just had to wait more, which came through Sterling, who finished off a pass from Gündogan at his pleasure, and Gabriel Jesús, who closed the win with which Guardiola’s team touches the knockout stages of the Champions League.

Incidents: match corresponding to the fourth day of group A of the Champions League played at the City of Manchester Stadium before about 45,000 spectators. EFE (HN)