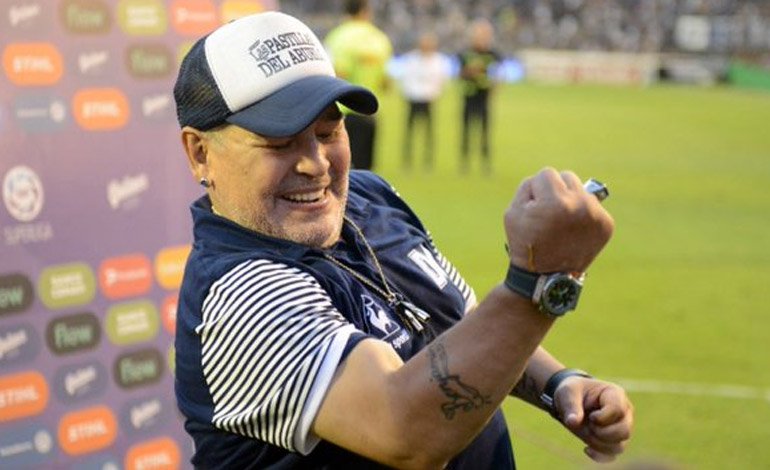 Some corner of Buenos Aires could witness the meeting between two men who admired each other, two geniuses in their own thing. Eduardo Galeano, as a “beggar of good football”, followed in the footsteps of Diego Armando Maradona, the one who had the “unbearable responsibility of working for God”. But it didn’t happen.

“The worst wooden leg”, as the Uruguayan writer and journalist defined himself, and the most loved and hated soccer player in equal parts throughout the world, as much a friend of the ball as of controversy, who turns 60 this Friday, had agreed to meet in the Argentine capital.

“No, they didn’t see each other, because they arranged a meeting in Buenos Aires, but it couldn’t be,” Helena Villagra, Galeano’s widow (1940-2005), author of “The open veins of Latin America” ​​or “The book of hugs» and one of the most renowned writers who included football in his work.

We will never know what would have come out of that conversation between two people with so many footballing and ideological affinities. What is known is that, after the many lines dedicated by Galeano to Maradona, someone as little given to showing his affections as ‘el 10’ opened his soul in 2005, when he learned that he had died.

«Thank you for fighting like a 5 in the middle of the field and for scoring goals against the powerful like a 10. Thanks for understanding me, too. Thank you, Eduardo Galeano: the team needs many like you. I’m going to miss you,” he told the Argentine newspaper La Nación.

You can also read:  A player suffers a heart attack in the middle of the game in Norway

Maradona, “the avenger -according to the Uruguayan author- of Argentina’s defeat in the Falklands War, through a tricky goal and another fabulous goal” in the 1986 World Cup, added: “Thank you for teaching me to read football.”

In his search for soccer beauty, Galeano obtained from ‘Pelusa’ “the best hours of joy and pleasure” and always recognized him and the Brazilian Edson Arantes do Nascimento ‘Pelé’ as the best footballers he had ever seen.

His book “Football in the sun and shadow” (1995), an essential bible for those who defend that sport and letters can coexist, includes eight stories in which Maradona appears.

In one of them, “Gol de Maradona”, narrates a goal of today’s Gimnasia y Esgrima de La Plata coach when he was a member of the Argentinos Juniors children’s teams, in 1971.

«The number 10 of Argentinos received the ball from his goalkeeper, dodged the center forward of River and started the race. Several players came out to meet him: he passed one through the jopo (toupee), another between the legs and the other he cheated on with a taquito. Then, without stopping, he paralyzed the defenders and the goalkeeper lying on the ground, and walked into the rival fence with the ball. On the court there were seven fried children and four who could not close their mouths.

Diego, who lived “in a poor house in a poor neighborhood”, was “the most beloved of all” the ‘Cebollitas’, recalls Galeano.

You can also read:  Messi to PSG, Pochettino asked for it

THE SHADOW OF MARADONA

But, without a doubt, “Maradona” is the story that best dissects the footballer and his circumstances, his head-on clash with power and even the burden of ‘being’ him.

“He was weighed down by the weight of his own character. He had problems with his spine, from the distant day when the crowd had first called out his name. Maradona carried a load called Maradona, which made his back crack,” Galeano details, adding: “It had not taken him long to realize that the responsibility of working as a god in the stadiums was unbearable, but from the beginning he knew that it was impossible stop doing it.”

According to the writer, his confrontation with the football establishments and with the Neapolitan camorra caused “the machine of power” to have it “sworn”, alluding to his successive positives for cocaine and ephedrine: “He sang the forty, that has its price, the price is charged in cash and without discounts’.

Galeano’s wife recalls for Efe the visit they both made to Naples (Italy) to tour the city that turned their patron, San Gennaro, “into San Gennarmando” when the ‘Golden Boy’ played there (1984-1990), times in which, as narrated in “Maradona”, “the dark south had finally managed to humiliate the white north that despised it.”

“We went to see their, shall we say, shrines that are everywhere. They love him,” details Villagra.

You can also read:  Edgar Badía admits that he was surprised that Messi asked him for his shirt

Perhaps the most emotional story dedicated to Maradona is “El parte”, from “Bocas del tiempo” (2004), Galeano’s last published while he was alive.

It recounts the birth of Diego Armando and explains that his mother, Doña Tota, “found a star, in the shape of a brooch” on the floor of the hospital when she went to give birth.

“The star shone on one side, and not on the other”, narrates Galeano in a magical fable of what would later become his life.

«That silver and tin star, clenched in a fist, accompanied Doña Tota in childbirth. The newborn was called Diego Armando Maradona, “he concludes.

The figure of the Argentine star re-emerges strongly in two posthumous works, “The children of the days” (2011) and “Cerrado por football” (2017).

In the first, he narrates the ‘goal of the century’, the one that scored England after the famous ‘hand of God’ in the ’86 World Cup, “when dancing, with the ball stuck to his foot, he left six Englishmen lost in the road”.

In the latter, an anthology of lines published in other books, the author who said in 1995 that «in the frigid football of the end of the century, which demands winning and prohibits enjoying, (Maradona) is one of the few who demonstrates that fantasy can also be effective” lowers the “generous and supportive idol” to the ground and argues that Maradona is that “dirty god, sinner, the most human of gods«. EFE. (JL).