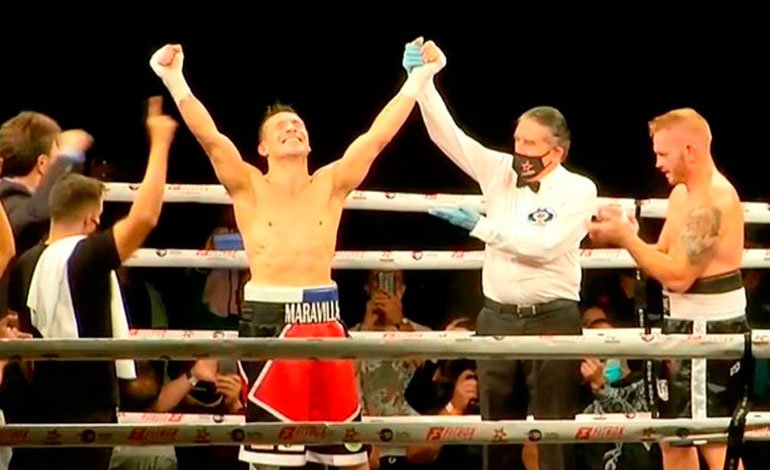 Sergio «Maravilla» Martínez returned to the ring, aged 45 and after six years without fighting, in a special evening organized in Torrelavega (Cantabria) and he did so with a victory by knockout, in the seventh round, against the Spanish José Miguel Fandiño.

“Maravilla” Martínez began taking the initiative of the fight, with his characteristic low guard and throwing crochets to punish his rival.

Despite his 45 years and his long inactivity, «Maravilla» was agile avoiding the onslaught of Fandiño, who also sought to harm him by alternating blows.

The 1,000 people who filled the capacity allowed by the measures adopted in relation to COVID-19, in the improvised ring installed in the El Malecón football stadium, were witnesses of the return to the ring of a world boxing myth.

Fandiño protected himself well from the attacks of “Maravilla” Martínez and tried to attract the Argentine fighter to the necessary distance to be able to launch his right hand.

In the sixth round, the one who came to be considered the best fighter in the world at the time managed to connect, on two occasions, a series of blows that were about to knock Fandiño down, but the bell saved the Asturian from falling to the canvas.

Gasoline did not last long for the Spanish boxer since shortly after beginning the seventh round, in a new attack by “Maravilla” Martínez, he could not hold out any longer and fell to his knees to the floor of the ring.

After achieving victory, still in the ring, Sergio «Maravilla» Martínez thanked his entire team for their work and stated that this «is the beginning of something very beautiful, of something good» and, despite his age, he assured «let me I’m going for the World Cup ». EFE (HN)