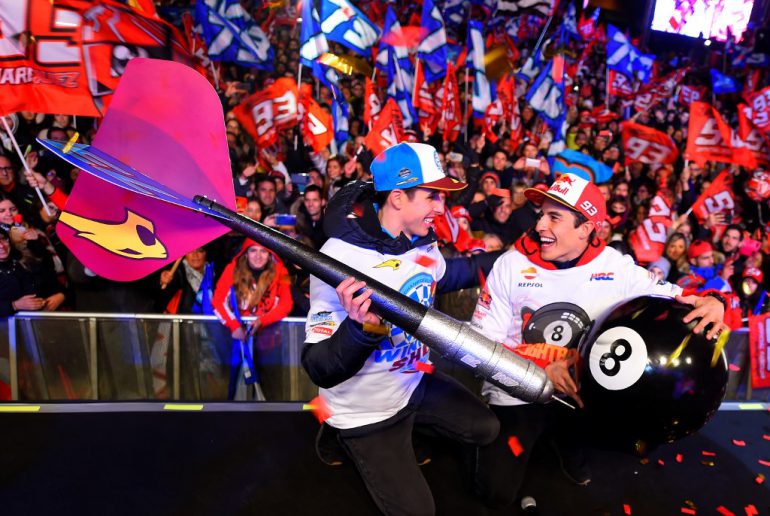 The Honda rider Marc Márquez, MotoGP world champion, affirmed this Saturday at the press conference prior to the celebration of his title in the town of Cervera that this season has been “the best year” of his sports career and described the course as “difficult to repeat.”

The Catalan described the season as “perfect”, since his dominance of the championship has been absolute. In fact, he was proclaimed mathematical champion in October, in Thailand. “We have known how to play our cards and it will be difficult to repeat, but what matters is repeating the world title,” he added.

Marc Márquez acknowledged that, despite having made winning titles a routine, they are all important: “It has weight because there are eight world championships. The first was already special, especially the first in MotoGP. The second I did not value and since 2015, when I had so many falls, I value them more. You never know if he’s going to stay here or not.

You can also read:  Paraguayan pilot Nelson Sanabria says that "he will risk his life" in Dakar 2017

In any case, he pointed out that you should never go “too much” or “feel superior.” «To be comfortable on Sunday you have to work very hard the previous days. The rivals have not been constant, they were failing and we have been regular, “he said.

Marc’s name is already among the references of Spanish sport, something that does not obsess him: “Honestly, I don’t want to see him, he gives a lot of respect. They put me on lists with Rafa Nadal, one of my references, or Pau Gasol and I would like my name to be there in the future, but now I face the season as if it were the first ».

You can also read:  Rosberg denies the Spa incident was deliberate

The pilot answered questions about his hypothetical renewal with Honda. “My priority is Honda, I will always be grateful because they gave me the opportunity to compete in MotoGP. We have already started talking and I attach importance to the sporty aspect. I have demands and so do they », he stressed.

Marc appreciated the quality of Álex, who also celebrated his second title: «He is gaining a place in MotoGP, he is not the brother of…. We always fall into the error of comparisons. His stage in Moto2 has been a bit slower than mine, but each rider has his progression. He is 23 years old and has two titles.

Marc revealed that he lived very intensely the achievement of the Moto2 title of his brother: «I have been more nervous with his world than with mine, I know what he has had to work and suffer. I enjoyed it a lot. The anecdote was that I was dressing for my career and I was already sweating. EFE