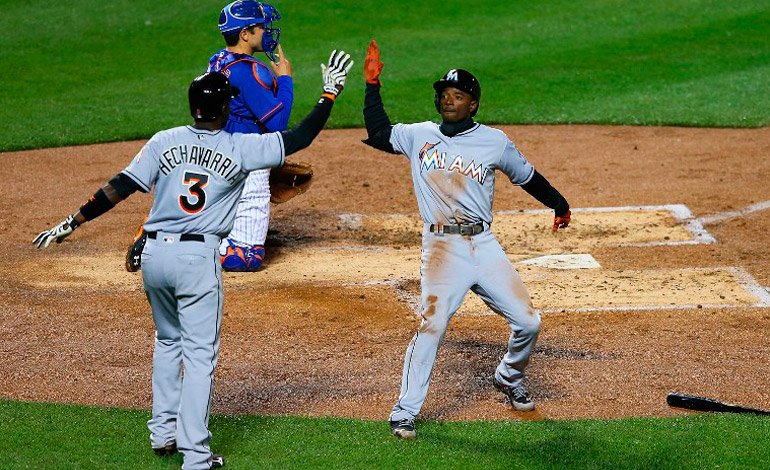 The power of the offense of the Miami Marlins and the St. Louis Cardinals was felt in the day of professional baseball in the National League and they were the great protagonists with the two triumphs they achieved.
The combination of the explosive hitting of the outfielder of Puerto Rican origin Giancarlo Stanton and the Dominican Marcell Ozuna allowed the Marlins to beat the New York Mets 10-3.
Stanton homered to cap a seven-run second-inning rally off starter Steven Matz, and the Marlins handed the rookie his first loss of the regular season.
Matz (0-1) took the loss even though he only lasted 1 2/3 innings.
Ozuna also bounced the ball out of the park and also hit a double to get out of a pothole he had when making contact with the ball.
Cuban Adeiny Hechavarría drove in three runs as the eighth bat to complete the stellar night of the Marlins’ offense.
All Marlins players for the sixth inning, except the pitcher, had connected at least one hit and scored a run.
Chris Johnson reached base four times in his first game start for Miami, while JT Realmuto had three of the team’s 15 hits.
Venezuelan Martín Prado hit two singles and walked twice in a game that lasted three hours and 45 minutes.
Few people stayed in the stands at Citi Field until the end.
Reliever Chris Narveson (1-0) was confident in 1 1/3 innings of work that allowed him to win after retiring two opposing batters via strikeout.
The offensive contribution of the Latino batters of the Marlins left Ozuna in front after going 2-for-6 with a run scored and an RBI, while Prado was 2-for-3 with a run scored and Hechavarría was 1-for-4 with a run scored and three driven.
Starter Michael Wacha worked six innings in which he gave up four hits without scoring and the Cardinals began to find their best offensive production by beating the Milwaukee Brewers 10-1.
If Wacha dominated from the mound, the explosive attack was presented by rookie Jeremy Hazelbaker when he went 4-for-4 with a triple, a double and a sacrifice fly, to put his batting average at .526.
Another rookie, Aledmys Diaz, hit a pair of doubles to go 3-for-5 with two runs scored and an RBI that also helped the Cardinals’ cause.
Puerto Rican catcher Yadier Molina, who went 3-for-4, had three hits, drove in a couple of runs, stepped on the register once and stole a base against starter Taylor Jungmann (0-1), who would be the one to carry the defeat.
While Randal Grichuk drove in his first run of the season by hitting a double.
Hall of Famer Lou Brock threw a perfect ceremonial pitch to former teammate Ted Simmons before the game, though it fell midway between the mound and home plate.
Last October, the former robbery champion suffered the amputation of his left leg, below the knee. Wear a prosthesis.
Wacha (1-0) retired seven batters by way of strikeout and walked one, struck out seven, walked one, and the four hits they allowed were all singles.
Alexi Amarista made a suicide bunt in the seventh inning to drive in the go-ahead run, and the San Diego Padres defeated the Philadelphia Phillies 4-3, who lost in the season opener at home.
Will Myers hit a solo homer for the Padres, who benefited from a rare double play and two video replay reviews.
Kevin Quackenbush (1-0) struck out the only batter he faced for the win after starter Andrew Cashner gave up three runs in just over five innings and went no decision.
Closer Fernando Rodney worked the ninth inning smoothly and earned his first save with his new Padres team.
Brandon Finnegan pitched a hitless pitch for 6 2/3 innings for the Reds, before giving up a single to David Ross and Addison Russell hitting a three-run homer off a reliever, as the Chicago Cubs came from behind and beat Cincinnati 5-3.
In the Cubs’ first home game this season, Ross’ single started a two-run rally. Jason Heyward cut Chicago’s deficit to 3-2 with a bases-loaded single off Tony Cingrani.
Falling to a record of 0-6 for the first time in almost 30 years, the Atlanta Braves lost 6-4 to the Washington Nationals, who with a night of four hits and two RBIs by Venezuelan catcher Wilson Ramos came out ahead after a weak opening by Max Scherzer.
On a bye week, Scherzer (1-0) got the win despite giving up two-run doubles to AJ Pierzynski and Nick Markakis in the first two innings. The right-hander went six innings and didn’t allow Atlanta to score again.
Ramos drove in the decisive run off Bud Norris (0-2) in the fifth, breaking a 4-4 tie. He added one more run with an RBI single off Alexi Ogando in the seventh. EFE