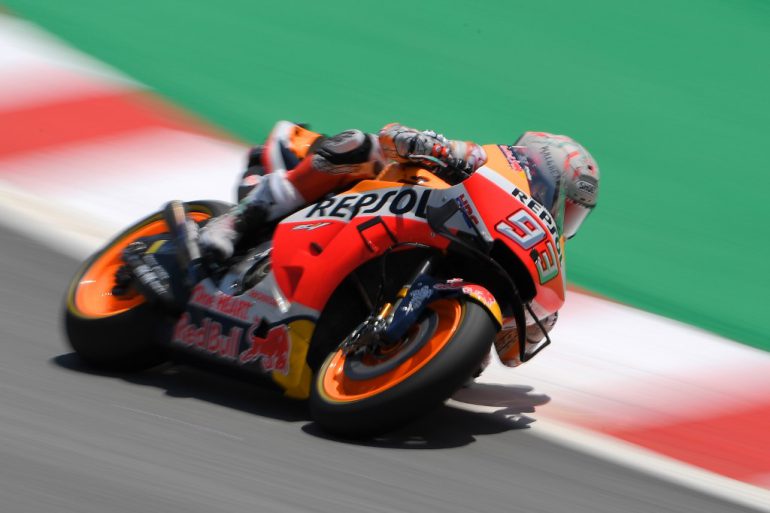 The Spanish Marc Márquez (Repsol Honda RC 213 V) was happy, despite being second in the practice sessions for the MotoGP Grand Prix of Catalonia, for having fulfilled his objectives, which were none other than to be in the front line of training output.

Surpassed by Fabio Quartararo, he was not very concerned about it. «If you try to escape Quartararo, at the moment he is far away in the championship; I am not interested in victory yes or yes, I have to understand the different performances, but it will depend on the strategy, maybe he pulls ahead and he can escape, maybe not, or maybe he helps me get together with him and open Hollow with respect to the others, it depends.

The Repsol Honda rider said that “there is no clear favorite, there is no bike faster than us, the pace is very similar and the race will be divided into two parts; the first ten laps will be a theme and the last fourteen will be another movie about tire degradation.

You can also read:  Lewis Hamilton wins his second race of three in Portugal this season 2021

Márquez acknowledged that “at some point we were suffering more than expected, especially this morning when we put the new tires on, but I knew that both the pace and the speed were there, so we opted for a different strategy.”

“We used intermediate tires at the beginning and soft at the end as it was not clear which of the two tires was working well and I have seen that the soft one was much better; It is a pity that in the last lap he failed, but the truth is that you fail because you are going to the limit and there has been a pilot who has gone a bit faster than us, so the objective of the first row is fulfilled », explained the Repsol rider.

Referring to the mishap with his teammate Jorge Lorenzo, he acknowledged that he had apologized “because he was in the middle of turn three and although people may say that it is free practice, it was the third, in which the last laps are like qualifying and I was so angry because I knew that my lap was very fair to enter Q2 directly and in fact I entered ninth, with the worst classification of the year ».

You can also read:  Hamilton achieves pole of the US GP

«It is clear that last year I was in the middle of the track twice and on both occasions they penalized me and in Mugello I already met Mir, we touched each other and everything at the end of FP3, here it was with Lorenzo; when I do, I will have to judge everyone equally, there is no difference, “commented the critic Márquez.

And as for the race, Marc Márquez stressed that “the choice of the rear tire is going to be crucial.”

«There are two tires that go quite well, the intermediate and the hard one, but we will try to understand things this afternoon and I think that both the Yamaha, the Ducati and the Suzuki are all there; Rins, Dovizioso, Rossi, Quartararo and Viñales are on the pace, and I think they will also be there ”, the world championship leader assured.

And, as for the probable development of the race «it will depend on the first laps and who leads, since if a fast one leads the race it will stretch and if a slow one leads, managing the tires, the race will be more in a group and there will be a few last laps competed until the end ».

“The only ones that I think can escape a little depending on how the grip is, will be the Yamaha since the others are all very the same,” continued Márquez. EFE