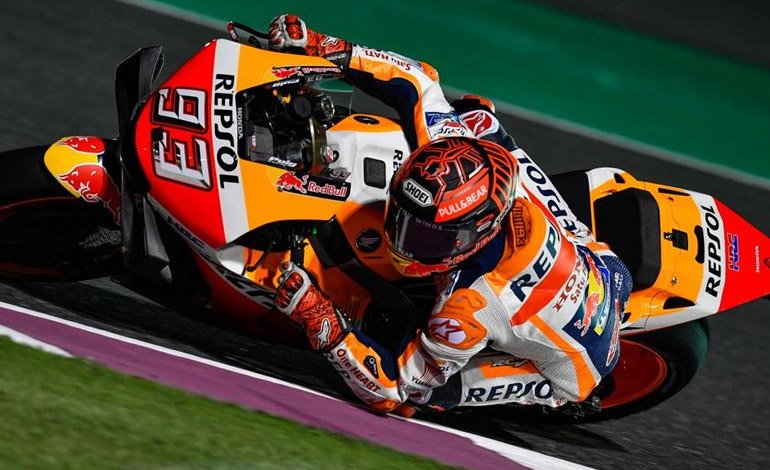 The Spanish Marc Márquez (Repsol Honda RC 213 V) needs just two points more than the Italian Andrea Dovizioso (Ducati Desmosedici GP19) to become MotoGP world champion for the sixth time in his sporting career and the Thai Grand Prix at the circuit of Buriram, could be the propitious scene for it.

New to the calendar since last year, the Thai circuit of Buriram has only had one winner and it was Marc Márquez, although it is true that to get the victory he had to wait until the last corner of the last lap and beat both the Italian and the to his compatriot Maverick Viñales (Yamaha YZR M 1).

In any case, and if we stick to the results achieved throughout the current season by the Repsol Honda team leader, with the exception of the Austin Grand Prix, where he fell apart, Márquez’s worst result has been a second place and, unless Dovizioso finishes ahead of him, with those results it would be worth him to be proclaimed world champion.

Only in the event that Dovizioso wins, he was second or third, ahead of Márquez in Buriram, would the Spaniard not be world champion, since the difference to mathematically win the title is two points, with which in addition to these, any other result in which the Spanish adds two points more than the Italian would make him champion and, if not, the achievement would be delayed until the race in Japan.

You can also read:  Marquez triumphs in Indianapolis

But in Thailand, in addition to the world title there will be other sources of interest such as the confirmation in the progression of the Yamaha YZR M1 of Maverick Viñales, in the first instance, and also in that of the Italian Valentino Rossi, although in his case he is not quite up to date. expected level, and also of the Suzuki GSX RR of the Spanish Alex Rins and Joan Mir.

Rins was one of Suzuki’s strengths at Motorland Alcañiz, but his performance went from more to less and the ninth position did not leave a good taste in the mouth, so in Buriram, a circuit that is favorable to the conditions of the motorcycle and in The one who finished sixth last year, barely three seconds behind the winner, could be the appropriate setting for a new success for Hamamatsu’s motorcycle.

The great protagonist, along with Marc Márquez’s Repsol Honda in Thailand, has to be Andrea Dovizioso’s Ducati, the only one that can embitter or rather delay the achievement of the Spanish title and that must confirm the progression that his pilot was asking for to the Italian engineers to try to be on the same level as their rival, something that at this point in the season may already be of very little use but could be used to prepare a response in conditions for the 2020 season.

You can also read:  Bahrain GP to be held without public presence due to coronavirus

The also Italian Danilo Petrucci, the second Ducati rider, has a very different objective, which is none other than trying to “assault” the third position that Alex Rins now occupies in the championship, a position that Maverick Viñales can also fight for. like Valentino Rossi.

Meanwhile, the Frenchman Fabio Quartararo (Yamaha YZR M 1) has two very different clear objectives, the first of them to continue the progression that has made him the revelation of the season and that has already left him a couple of times at the gates of victory (Catalonia and San Marino), and the second, to be guaranteed the “honorary title” of best rookie of the season.

More complicated will be the return, if he is fit, of the Spanish Pol Espargaró (KTM RC 16), whom the fall suffered in Motorland Aragón made him undergo surgery and although he will not be able to be one hundred percent, no one doubts that that he will try to do his best to place the Austrian manufacturer’s motorcycle as high as possible in the classification.

You can also read:  Bahrain hosts the latest tests

His brother Aleix achieved in Aragon the best result on the Aprilia RS-GP handlebar, seventh, but it is not a result that indicates the exact level of the Noale manufacturer’s motorcycle, as it is still very far away in its evolution of the bikes. best in the category, something that has both the Spaniard and his teammate, the Italian Andrea Iannone, desperate.

Little is expected of Jorge Lorenzo (Repsol Honda RC 213 V), who also arrives at a scene in which last year he suffered as a result of a fall that made him lose the race and which aggravated his “ordeal” and his physical ailments on the Ducati, and that it is now taking longer than necessary.

For Tito Rabat (Ducati Desmosedici GP18) it will be a completely new event since last year he could not be in Buriram as he was still convalescing from the serious accident he suffered in Silverstone (England).