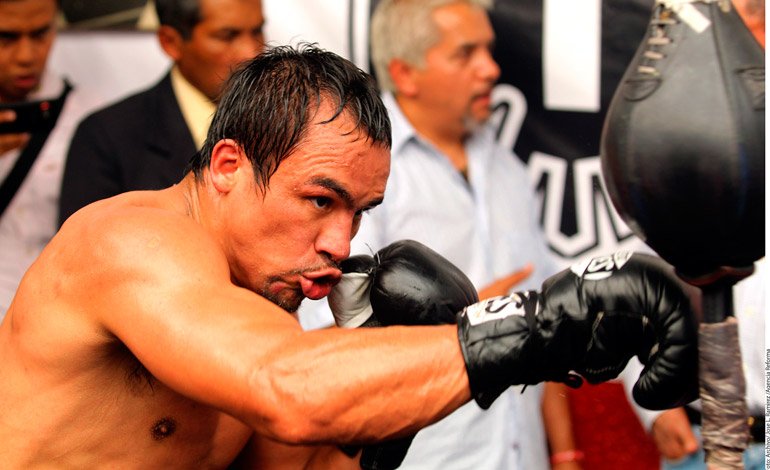 The generational change that was talked about so much in Mexican boxing after the departure of characters such as Érik Morales, Marco Antonio Barrera and imminently Juan Manuel Márquez, is coming to an end, since it is ‘Dinamita’ himself who thinks that in another year will be seen those new names that lead the Aztec boxing.
Márquez lists fighters such as Juan Francisco Estrada, Saúl Álvarez, Carlos Cuadras, Óscar Valdez and Gilberto Ramírez as the present and future of Mexican boxing, and he trusted that they will be in charge of leading the actions in the sport of fists sooner than that many expect.
“I think it is a good time in Mexican boxing, it has remained, but you need someone to take the baton and be the next idol of Mexican boxing, but somehow there is still someone who can be, they need a little more of be more careful about those who promote, but Mexican boxing is present and it is a matter of time before it arrives, “said the Mexican prior to the recording of Golpe a Golpe this Friday at the ESPN facilities.
Márquez enlisted the men who will lead the tricolor boxing, and assured that one of them will take that baton that for now does not yet have an owner such as the head. “I like the ‘Gallo’ Estrada, I have always said that he is a great boxer, he needs to cook that fight with ‘Chocolatito’ González that everyone wants to see, there is Canelo Álvarez who still does not fully fit in the taste of the people but in the end they support him, and there are other fighters who are also wanting to get ahead, Carlos Cuadras, Óscar Valdez, ‘Zurdo’ Ramírez, it is a matter of time for an idol to grow ”, said the capital idol.
When asked which of them he believed had the best conditions, he opted for Estrada from Sonora.
“(Juan Francisco) ‘Gallo’ Estrada I think is the most reliable letter and of what can be believed most in boxing, he is strange because he is a fighter who is technical, in pants, he likes to exchange blows, he has all the facets that a boxer needs, when he needs to box, box, when he needs to fight, he girdles himself, throws his combinations well, it is a matter of time, a year or two years, some of them are going to jump ”, he predicted. (Courtesy of Espndeportes.espn.go.com)