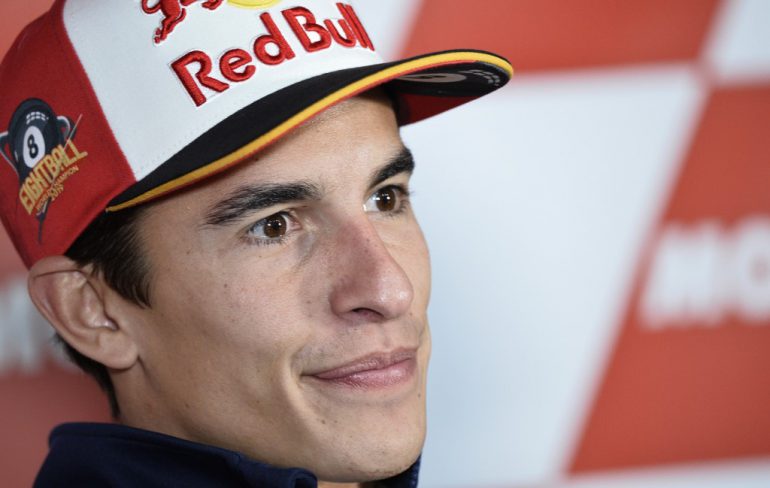 The Spanish Marc Márquez (Repsol Honda RC 213 V) attended the EFE Agency on the day prior to the start of the Valencian Community Grand Prix, the last event of the motorcycling world championship, which already began “altered” by the news of the withdrawal by Jorge Lorenzo, his teammate.

The world champion had no hesitation in highlighting Lorenzo’s professional career. «The decision is, well, first of all, I congratulate him on his sports career, but above all for making the decision, since it is very difficult and even more so when you have one year left on your contract, but I think it shows us what it is Jorge Lorenzo, the character he has ».

At another point in the interview, Marc Márquez spoke about the future of his brother Álex and, resoundingly and without ruling out anything, even being with him as a teammate in the near future, he pointed out: «My brother is capable of anything if he is convinced with the project; He is capable of doing everything and he has shown it and by commitment and professionalism, which he does not lack, and with work, he can get everything “.

This is the sports interview with the Repsol Honda rider and six-time MotoGP world champion, Marc Márquez:

Q. What do you think of the announcement made today by your teammate Jorge Lorenzo to withdraw from the competition after the Grand Prix of the Valencian Community?

A. «The decision …, first of all, I congratulate you on your sports career, but above all for making the decision, since it is very difficult and more so when you have one year left on your contract, but I think it shows us what it is. Jorge Lorenzo, the character that he has, that he is a champion, is a pilot who how he has seen now, when he has seen that he was not there to win and the mountain has been made too high, he has said ‘buaah’ to win here I will not be able to, and has decided to stop; and stop when you have one more year on your contract, another driver in that situation would have thought of doing one more year thinking ‘I’m here spinning for another year, I collect the money, I’m going home and so calm’ and that’s what he says a lot about Jorge, especially the professional commitment he has with this sport and what it has been in his sporting career, right? A reference”.

You can also read:  Alonso: I adapt well to the Singapore GP, two podiums in two races

Q. Who will be the replacement? Who will come in your place next season, or who would you like to have next year next year?

R. «This is Honda, they are the ones who have to decide, but surely the situation has also caught the team and us by surprise, but now Honda is the one that has to decide which strategy to follow, if to take a pilot with more experience or bet on one of the youngsters -Ndr: This is where you could well think about the arrival of his brother- who goes up and give him the opportunity to make himself seen in the category in the premier category ».

Q. What grade would you give this season?

You can also read:  Ogier: "It's not going to be an easy season"

R. «I would be close to ten (smiles). I do not like to give the ten because I think that the ten does not exist in a sport like motorcycling, but a 9.5 or 9.8 yes that would give it to me ».

Q. And those tenths that are missing for the perfect grade could have been taken from somewhere? From the improvement in the performance of the motorcycle’s chassis?

R. «No, no. This is a general assessment, but if, for example, in Austin I had won the race, then perhaps I would have dared to say a ten, but in a season you always make a mistake.

Q. What have been the moments of doubt or indecision this season?

R. «There was one, if it can be defined as a moment of doubt, which was in Austin, one of the races in which I was most confident and that I was leading, but I made a mistake and I thought ‘wow if I make two or three mistakes like this one, which was a bit strange mistake, the championship can be escaped ‘right? he asked himself, “but then I got to Jerez right away, I won and the birds went out of their minds.”

Q. Your toughest rival of the season?

R. «My most complicated rival of the season» – he repeated aloud, to respond immediately – «difficult, at the consistency level I think it was Dovizioso, because he was the most outstanding, but at the speed level Quartararo ».

Q. Has anyone surprised you by your performance or something unexpected during the season?

R. «I did not expect a Quartararo with such speed, it is perhaps the one that has surprised me the most».

You can also read:  Sainz: "Formula One 2017 has moved up in category, it is going much faster"

R. «No. He -Quartararo- will be one of the rivals to beat, but there will be those other rivals on the list such as Viñales, Dovizioso and it remains to be seen during the preseason who appears.

Q. What bike would you recommend to your brother Alex to get into MotoGP?

R. «Well, he has to see it, he has to trust the project, but there are four brands that stand out from the others, which are Honda -Ndr: he does not rule out his own brand of motorcycles-, Yamaha, Ducati and Suzuki and that is where he has to assess, among those options, if he wants to do it really well, but my brother is working in the best way he knows how and is showing it, now Moto2 world champion to make a place in MotoGP and I hope he has the opportunity to choose and which brides appear to him and this is also good ».

Q. No one better than you to know how your brother drives, could he do well with the Repsol Honda?