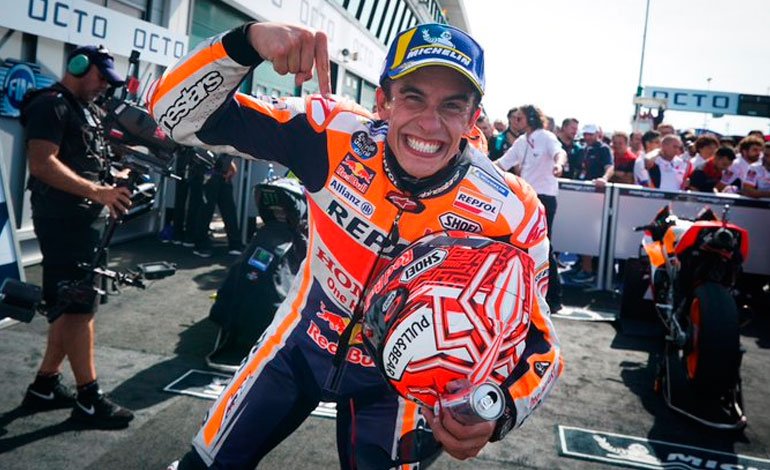 Spaniard Marc Márquez is a little closer to his sixth MotoGP world title after winning the San Marino Grand Prix by overtaking Frenchman Fabio Quartararo on the last lap.

At the Italian circuit of Misano, Márquez, 26, played cat and mouse with the young French rider, who was only a few tenths ahead of him at the finish line.

“In the end I said to myself: ‘do I try or not?’ And I decided to go for it,” confessed the Spanish champion.

Márquez thus reinforces his leadership in the World Cup standings and is closer to a sixth title in the premier category.

– Márquez with +93 points –
The Cervera rider now has a 93-point lead over Andrea Dovizioso (Ducati) in the World Championship, with only six races left, the next one in Spain (Aragón GP), where Márquez still will not have a mathematical chance of proclaiming himself champion . ‘Dovi’ could only be 6th this Sunday.

You can also read:  Andreas Mikkelsen, leader after the first day of Rally Germany

The third box on the podium went to Maverick Viñales (Yamaha), who had started from pole, but was quickly overtaken by Quartararo.

“It was a very tough race,” said Fabio Quartararo, who took the lead on the second lap.

“It is the first time that I have fought like this with Márquez,” added the young French rider, who is 20 years old in his first season in the premier class, in which despite his good feelings he has not yet achieved victory.

However, with three poles and four podiums – two second places – the young ‘rookie’ is consolidated as the revelation of the season.

You can also read:  The first special, for Tidemand; Ogier seventh

As for the KTMs, which had shone in rehearsals, especially with a second place from Pol Espargaró, they returned to their usual pattern this season with the Spaniard in 7th position and his French teammate Johann Zarco, 11th.

Another Spaniard, Alex Rins (Suzuki), crashed, which caused him to lose the 3rd position of the World Championship in favor of Italian Ducati Danilo Petrucci.

– And Alex Márquez more leader –
But Marc Márquez’s was not the only Spanish Spanish victory at Misano. Augusto Fernández prevailed in the Moto2 category, thus achieving his second consecutive victory at the end of an even duel with the Italian Fabio di Giannantonio.

His compatriot Alex Márquez, Marc’s little brother, consolidated his leadership in the intermediate displacement World Championship thanks to his third place ahead of the Swiss Thomas Lüthi.

You can also read:  Alonso will drive on Wednesday and Friday in Montmeló

Fernández already won the British GP three weeks ago and this season he has already climbed to the top of the podium three times.

And the Japanese Tatsuki Suzuki won the Moto3 race, thus achieving his first victory in this category.

Suzuki, 21, who had started from pole position, fought to the end for victory with a group of seven riders, in a race marked by numerous crashes and dropouts.

The Spanish Arón Canet, second in the World Cup before this event, abandoned due to mechanical problems. The Italian Lorenzo Dalla Porta thus increased his advantage as leader of the general classification despite a penalty for exceeding the limits of the track, which caused him to lose several places at the finish line. AFP