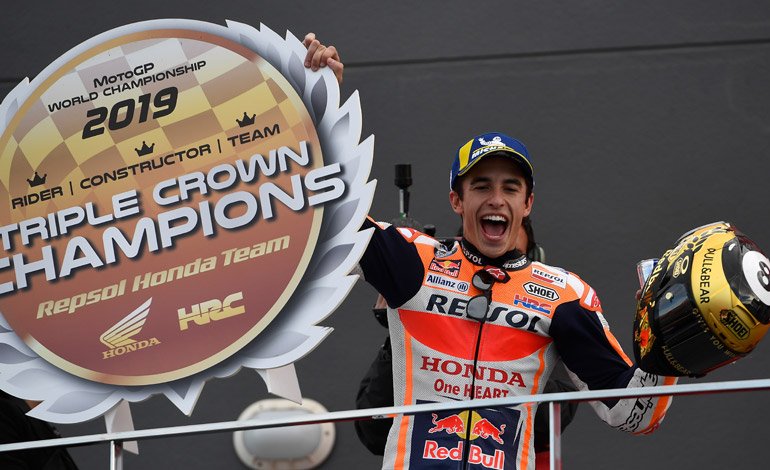 Spaniard Marc Márquez (Honda), already crowned MotoGP world champion for the sixth time, was once again intractable in the last race of the season in Valencia, beating the young Frenchman Fabio Quartararo (Yamaha-SRT).

By winning his 12th MotoGP victory of the year (and 56 of his career in the premier class), the 26-year-old Márquez proved he is unrivaled in the category and equals his record for first places in a season dating back to 2014.

“It has been a difficult weekend because we have tried new things,” said Márquez, who is already looking to 2020 and a seventh title that would allow him to equal his Italian rival, Valentino Rossi.

“It was a perfect season, difficult to repeat,” he admitted, when his Honda team also won the constructors’ and team’s world championships.

You can also read:  Toby Price, the first Australian winner of the Dakar in motorcycles

After a bad start from second on the grid, behind Quartararo, the Spanish champion rallied one by one over all his rivals to win more than a second ahead of the Frenchman, who led the first laps.

The 20-year-old Frenchman got his 5th second place in his first MotoGP season on Sunday, allowing him to finish 5th in the final World Championship standings.

«Who would have imagined that in this first year he would get seven podiums and six poles? I’m very happy, ”said the Frenchman.

The emotional note of the day was put by the triple world champion of the category, Jorge Lorenzo, who said goodbye to the slopes at 32 years old.

You can also read:  Alonso: "McLaren-Honda should focus on the 2016 car"

The Spaniard finished the race in 13th position after a difficult season.

– Who is Lorenzo’s motorcycle for? –

Her place in the world champion team is very attractive and Álex Márquez, Moto2 world champion this year, could join her older brother, but the riders of the LCR satellite team, Honda’s satellite, also want her.

However, both fell this Sunday, starting with the British Cal Crutchlow and then the French Johann Zarco, knocked down by the motorcycle of the Spanish Iker Lecuona (KTM), who was running his first MotoGP race and fell right behind him.

Expelled from KTM in the middle of the season, the Frenchman ran the last three races of the season with LCR replacing the injured Japanese Takaaki Nakagami. His results, however, leave a great unknown about his future in MotoGP and he could ‘go down’ to Moto2 where he was champion in 2015 and 2016.

In the other categories, South African Brad Binder (KTM) achieved his 3rd consecutive victory in Moto2, in which Álex Márquez had already secured the title of world champion. The 24-year-old Binder will race next year in MotoGP with the same Austrian team.

In Moto3, the Spanish Sergio García won, who at 16 achieved his first victory in his first season in the category, in which the Italian Lorenzo Dalla Porta was proclaimed world champion this year.

The race was marked by several crashes, was stopped with a red flag and finally shortened. AFP