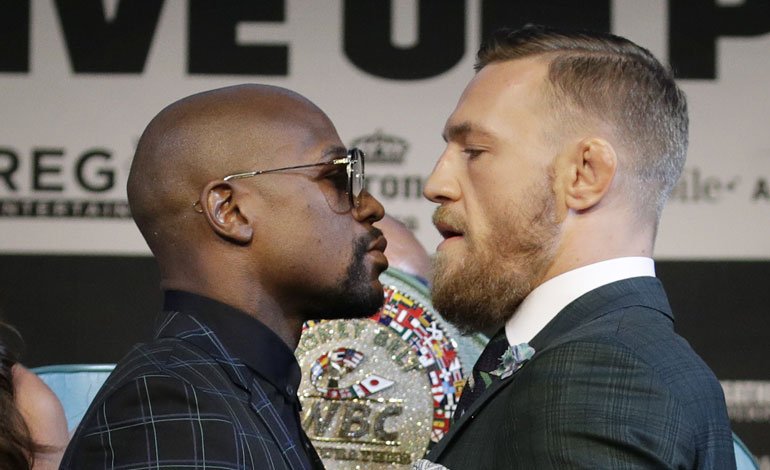 Floyd Mayweather Jr. and Conor McGregor will fight the most mediatic fight in the history of combat sports this Saturday from the T-Mobile Arena in Las Vegas, with the mission of fulfilling the expectations created for the first official combat in a ring between a boxer and a mixed martial arts (MMA) fighter.

Mayweather (49-0) returns after a two-year absence only to face this challenge where he hopes to reach a 50-0 mark, while the popular “The Notorious” wants to break into the boxing world after becoming the fighting face in the octagon.

«I have been doing the same for 20 years. I have 20 years being the best. No one is going to come overnight to take what is mine. Conor got into big trouble by challenging me. I’m here just to send him to school, ”said Mayweather, who could get a bag worth about $ 100 million.

McGregor, who will also receive the biggest bag of his career, is undaunted and threatens to destroy Floyd.

«I am the new face of boxing. I am going to lead an alternate career in boxing and MMA. The only one who can give entertaining fights is me. Floyd is finished. The good thing is that he came back to greet the new champion, “McGregor (21-3) told AFP.

My fist is bigger than your head. When the fight is over, Floyd will only think he was hit by a truck. I see the fear in your eyes. He knows he’s never fought a guy like me, “he added.

Las Vegas, once again, is experiencing a rarefied atmosphere, with a one-of-a-kind event and with entrepreneurs and residents trying to join the fever of the event called #MayMac.

From brothels offering VIP packages of up to one hundred thousand dollars that include tickets to the fight to people trying to rent their houses to the most curious who cannot find rooms available.

The fight is set at 154 pounds and may not be held to a full house given the exorbitant price of tickets, so the organizers’ bet is to make the event profitable through Pay Per View sales, where they plan to reach four million households.

You can also read:  The Mexican Novoa, "boxer of the month"

If they think this is an exhibition fight they are wrong. Conor came to boxing to win and when he puts his left hand on Floyd’s head then people will know what we are talking about, “said Dana White, president of the Ultimate Fighting Championship (UFC), to AFP.

“Conor is going to destroy him and Mayweather will have no excuses,” said White.

Even the World Boxing Council (WBC) decided to sanction the fight and will give the winner the so-called “Money Belt”, a handmade belt made with crocodile skin and adorned with pieces of gold, emeralds and sapphires.

Opinions between specialists in both sports are divided on the real chances that McGregor has of winning this fight.

«Floyd is going to win by KO. I don’t think Conor can finish the fight. This is a sport that is unknown and in which you will face one of the best in history. To be honest, Conor has no chance of winning, “boxer Jessie Vargas told AFP.

You can also read:  Vijender Singh, the Indian boxing figure who wants to be world champion

“If Conor can keep his distance and doesn’t despair, he can connect Mayweather. McGregor’s left-hander is capable of knocking out Floyd, so be careful to discard him before going into the ring, “said Russian-Peruvian UFC fighter Valentina Shevchenko.

Another reference in the preamble of the fight is the betting, where Mayweather comes with an advantage (4-1) but in which the range of possibilities is wider than usual, from the KO of McGregor in the third round to the possibility of the UFC champion landing an illegal punch, which in both options would pay 20-1.

In fact, Mayweather decided to prevent any surprises and secured the contract of the fight with a strong financial sanction to the Irishman if he launches an illegal blow.

Perhaps the only setback Floyd Mayweather Jr. suffered in the preamble to the fight was that the Nevada Athletic Commission approved the use of eight-ounce gloves, something that could theoretically benefit Conor McGregor, who is used to wearing lightweight gloves in the UFC. AFP