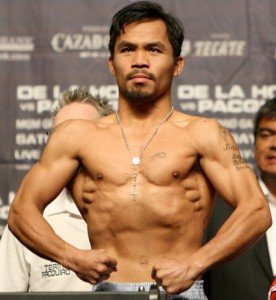 New York.- The American boxer Floyd Mayweather will not face the Filipino Manny Pacquiao when the deadline expires for the North American to agree to finalize the long-awaited fight, which was scheduled for next November 13, as announced by promoter Bob Arum. Mayweather did not want to fight the Filipino Pacquiao.

Pacquiao’s veteran promoter and manager, at a press conference in New York, announced that “the deadline has passed” since Mayweather “did not sign the contract” to face Pacquiao in November.

Mayweather’s disinterest in signing the contract for the fight with Pacquiao leads the Top Rank company to place Puerto Rican Miguel Cotto or Mexican Antonio Margarito on the Filipino’s route, in clashes of great interest, but not like the one that would arouse a duel with “Money” Mayweather.

Arum said that “Mayweather exceeded the deadline to sign the fight with Pacquiao”, but left a door open for this fight to take place because if in the process of negotiating with Cotto or Margarito, “Money” accepts the fight, then he would be the right one to face the Filipino in November.

And that businessman Ross Greenburg, of the HBO network, had apparently negotiated an agreement with Mayweather’s manager Al Haymon, but “Money” has not yet signed.

The New York promoter assured that Mayweather “perhaps he did not sign, because there is uncertainty with his uncle and trainer Roger Mayweather, who faces legal problems.”

You can also read:  Tamers of Cuba sweep Caciques of Venezuela and mark debut in VII Series