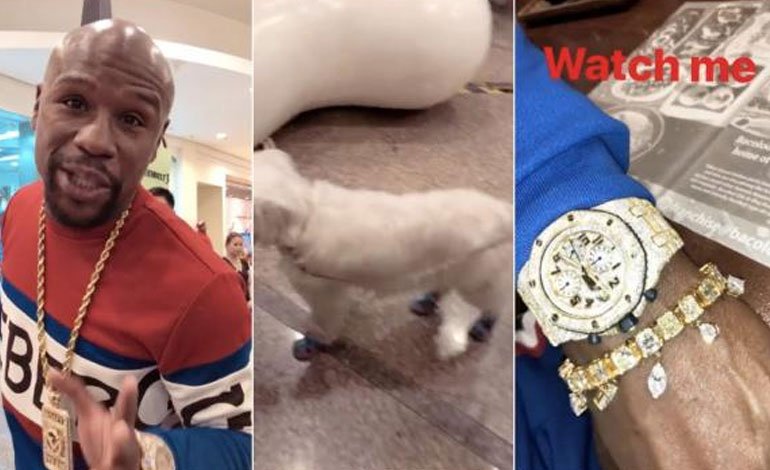 Floyd Mayweather is known for being quite conceited and boastful with the millions that his career has left him, and in a new display of ego, the boxer just confessed that the shoes his pet wears are designer and cost more than his .
He confessed this in a video that went viral and that many of the more than 20 million that the athlete has on his Instagram account found it very funny, but not so much for others.
https://youtu.be/SfjJzpGft6A
“My dog ​​wears designer shoes. What’s more, they cost more than my shoes, “commented the so-called ‘Money’, who surely spent many thousands of dollars on the little blue shoes that his pet wore in the Philippines.
The boxer also took the opportunity to show off his expensive watch with multiple diamonds and then shared another image in which he is seen resting in a beautiful hotel, and again launched one of his usual comments.
“Relaxed and smiling, while making millions sitting on my butt. You can smell the bag through the photo and I’m not talking about this Louis Vuitton wallet. The photo of the day ”, said the world champion, who pampers his pets so much, that he has shown other videos in which he shows that when he travels in his private jet, they also enjoy special attention and only drink crystal water from fine sources .
See the boxer showing off his puppy and tell us what you think of him. (Yahoo / sports)

You can also read:  Professionalism and rule change break into Rio boxing