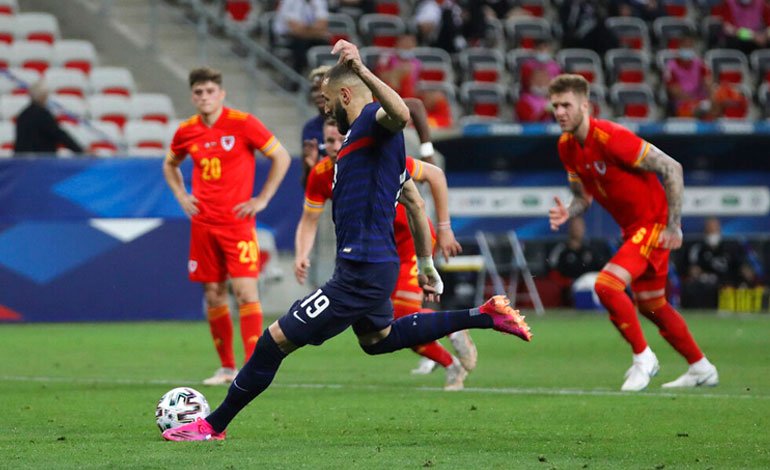 All attention was focused on him, but the laurels went to others. Kylian Mbappé and Antoine Griezmann, with their respective goals, overshadowed the reappearance of Karim Benzema with the France team, who won three-nil in a friendly against Gareth Bale’s Wales, who played an hour with one less.

Benzema played a good game, showing harmony with his attacking companions, but he missed a penalty that he himself had caused in the 25th minute called with the help of VAR.

Real Madrid’s 9, in his 82nd selection, came close to scoring on several occasions, such as the shot at the post in the 79th minute, in which Ousmane Dembélé took the opportunity to score the third.

France, which debuts on June 15 against Germany in the European Championship in a difficult group that also includes Hungary and Portugal, had a peaceful night in a match conditioned by the early expulsion of N. Williams in the 25th.

You can also read:  Goalkeeper Esteban Andrada leaves Boca to sign for Monterrey

Wales, led by Bale, who played only one hour, dedicated themselves to defending themselves and trying not to concede a win.

Benzema returned to the same venue where he played for France 5 years and 7 months ago, the Allianz Riviera stadium in Nice. On October 8, 2015, in a friendly against Armenia, in which he then scored a double (4-0).

Forgiven by Didier Deschamps, who had removed him from the national team for his alleged involvement in blackmailing his colleague Mathieu Valbuena, Benzema was especially active, moving with some freedom down the attacking front.

However, the laurels were taken by Mbappé and Griezmann. The top scorer in the French championship was quick to catch a rebound from goalkeeper Ward, to a shot from Adrien Rabiot, and added his 17th goal in the “les bleus” shirt in 43 games, despite protests about a possible outage. forward game.

You can also read:  Messi «is well and ready» to play against Uruguay: Scaloni

In the second half, Griezmann drew a work of art to Mbappé’s heel pass. The Barcelona attacker fired an accurate shot at the right corner of the Welsh goalkeeper.

The current world champion closed the scoreboard with a goal from Dembélé, also recovered for the national team by overcoming the physical problems that gripped him at Barcelona.

Incidents: Friendly match in preparation for the European Championship played without an audience at the Allianz Riviera stadium in Nice, in the south of France. EFE (hn)