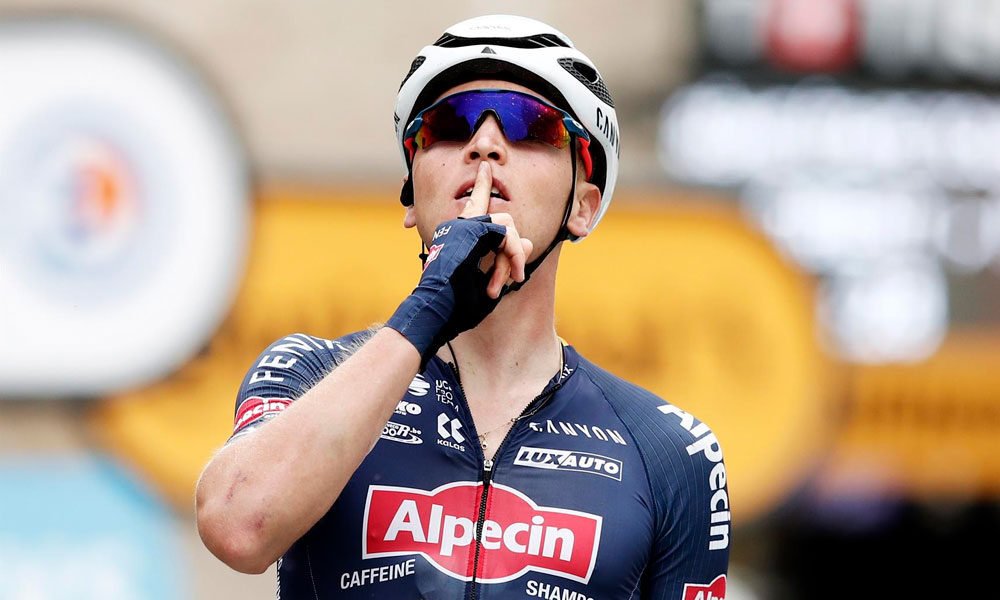 On another day marked by a festival of falls that mainly affected the Slovenian Primoz Roglic, the sprint reduced by accidents was taken with authority by the Belgian Tim Merlier (Alpecin Fenix), the second consecutive victory for the formation of Mathieu Van der Poel, who kept the yellow jersey.

The third stage between Lorient and Pontivy, of 182.9 kilometers, was marked for the massive sprint, and there was, but maimed by accidents. The Tour is pure shock. This time involving the first swords, first Geraint Thomas and finally Roglic, the most injured giving more than 1 minute, and Miguel Ángel López, faced with misfortune.

Merlier fulfilled the forecast. While Ewan, with a broken clavicle and Sagan, rolled on the asphalt, the Belgian raised his arms, premiering his record in the Tour, ahead of his compatriot and teammate Jasper Philipsen and the Frenchman Nacer Bouhanni (Arkea). Alaphilipe, Van der Poel and Richard Carapaz (Ineos) entered the first group of lucky ones.

The Ecuadorian was the first of the great favorites, leading Enric Mas and Nairo Quintana on the stage by 14 seconds, Pogacar by 26 and Roglic by 1.22 minutes, injured and powerless after a desperate chase.

There are no transition stages here. Everything was ready for the sprint, but the general underwent somewhat significant alterations. Carapaz benefited and is third overall, half a minute behind Van der Poel, but de facto he is the leader of the race. The reference, with Pogacar 8 seconds behind Carchense, Enric Mas and Quintana at 9, Geraint Thomas at 36 and Roglic at 1.04.

Depart from Lorient, the “city of 6 ports”. The Tour said goodbye to the coastal roads, within the Breton department of Morbihan, to enter the mainland for the remainder of the Tour. The ports from now on will be mountain, but they will arrive in the Alps from the eighth stage.

From the outset, there was no shortage of escape, nor the heavy rain, nor the scare of the day. Geraint Thomas, winner of the 2018 Tour, rolled on the ground at km 37 after losing control of the bike on a speed bump. Luke Rowe came to the rescue of his fellow countryman from Cardiff. He returned to the group.

Worse luck was the Dutch Robert Gesink, who also fell next to Thomas, but with the result of immediate withdrawal. Primoz Roglic lost a trusted soldier for the battles that await in the Alpine and Pyrenean mountains. The Tour does not forgive, it cruelly punishes any mistake or weakness.

You can also read:  Sotomayor opens restaurant and bar «2.45», in honor of his world record

The escape was already formed from the beginning with the usual Dutch Schelling, leader of the mountain, Wallays, Schär, Barthe and Chevalier. The boy with the Faralaes jersey added a little point in the Cota de Cadaudal, in Plumelec and dropped the peloton, which rolled with the calculator to hunt down the daring on the run as soon as the sprint protocol was activated.

In Plumelec Valverde was able to remember something historic in his professional life, because in that town he won the initial stage of the 2008 Tour and donned the yellow jersey. Thirteen years later, the diluted Murcian passed by in a squad that was pursuing the breakaway 2 minutes late.

A FALL PUNISHES ROGLIC, MERLIER TAKES ADVANTAGE OF THE CHAOS

Many teams interested in the first pure sprint of the Tour, many sprinters eager to remove the “carbon” and release their locker. The Deceuninck of the reappeared Cavendish tightened the rhythm 50 km from the finish line, the escape was sentenced to 7 of Pontivy.

But the story, on the Tour, changes in seconds. A fall 11 km from the finish line involved Miguel Ángel López, who did not miss one this year. A few meters later another accident. Roglic and 2 Jumbo companions rolled and landed badly.

With the peloton reduced and with Roglic delayed 1 minute, everyone spread their wings to reduce the Slovenian in the general classification. Frustration in the double winner of the Tour, desperately chasing with the help of 4 teammates. A “for himself who can” began.

At 4 km from the finish, another fall eliminated the French Demare. One less for the sprint. Some were lucky enough to dodge the jinx, like Mas, Quintana, Pogacar, the leader Van del Poel and Alaphilippe. While the Jumbo suffered from reducing the time impact on Roglic.

The sprint was formed with a handful of sprinters. At 200 meters from the finish, Ewan and Sagan crashed. The Australian to the hospital. Outside the Tour. Meanwhile, Merlier took advantage of the good lane to claim victory in Pontivy, the hometown of UCI president David Lappartient.

The fourth stage of the Tour de France offers another opportunity for sprinters with the 150.4 kilometer course between Redon and Fougères. No orographic difficulty on the route in the last Breton stage. EFE (HN)