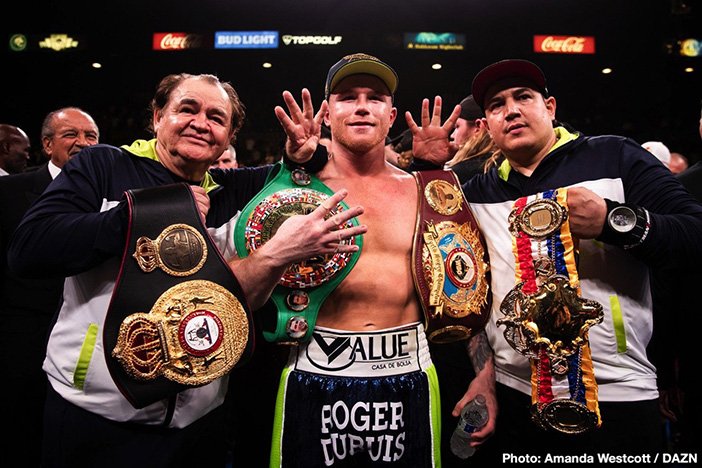 Both fighters had an even fight until ‘Canelo’ punished the Briton harshly in the eighth round and, unexpectedly, his coach warned that he was no longer going to return to the ring to the jubilation of the fans.

“I knew the fight was going to start around the eighth round. But it was not as difficult as I expected, I realize that my preparation was good and I am improving day by day “, said ‘Canelo’.

You can also read:  Mayweather, Marquez, Cotto, Hopkins and Jones elected to the Boxing Hall of Fame

“I knew this was going to happen,” he said. “I knew he was not going to come out because I broke his cheekbone.”

The only thing left for the Mexican is to win the title of the International Boxing Federation (IBF), which is owned by the American Caleb Plant.

At 30, the Guadalajara fighter has 56 wins, two draws and a single loss to American Floyd Mayweather Jr by decision in 2013, when he was 23 years old.

‘Canelo’ had the overwhelming support of the more than 73,000 fans present at AT&T Stadium, the majority of Mexican origin, in the highest attendance for an indoor boxing match in the United States.

It was also the largest sporting event in the country since the outbreak of the coronavirus pandemic more than a year ago.

After Texas authorities lifted restrictions related to the pandemic, organizers did not impose physical separation between spectators, most of whom did not wear masks. (AP) (GG)

You can also read:  Canelo Álvarez defeated Caleb Plant and is the monarch of the super middlemen