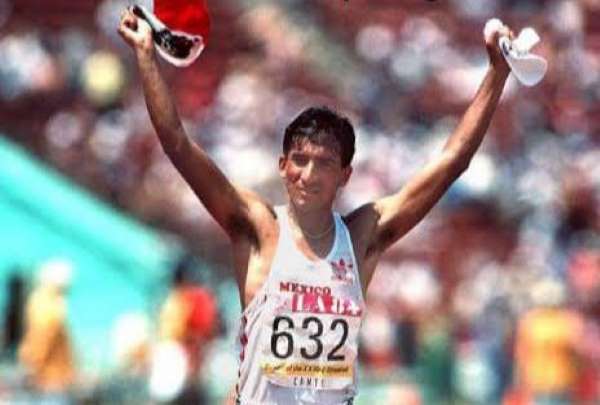 Mexican marcher Ernesto Canto Gudiño died this Friday afternoon, November 20, at the age of 61, after fighting a fight against cancer. This was confirmed by the Mexican Olympic Committee, an organization of which he was a member. His career as an Olympic marcher was recognized for his many achievements, including the gold medal obtained in the 20-kilometer walk of the Los Angeles 84 Olympic Games.

On October 31, 2020, the athlete communicated through his Twitter account about the fight he was waging against a disease. He also thanked the public for their concern and reported “every day I regain strength and courage to move forward.” Five days later, by the same means, he thanked the samples of affection and asked for understanding as the doctors recommended tranquility. He thanked his family for their support as it was being “fundamental”. Until that date, he ruled out requesting donors, although he did not rule it out for the future.

He was born on October 18, 1959 in Mexico City. “At age 13 he began his harvest of victories: national champion for children; later, in 1973 he conquered the 10 kilometers of the Central American and Caribbean Youth Championship Caracas 1974, a title that he kept in Xalapa 1977 and also achieved the American Youth title, in Montreal. ”, according to the Mexican Olympic Committee (COM).

You can also read:  Woman with prosthesis ran 102 marathons in 102 days

Towards the end of the 1970s, he began his career as an athlete. In 1981 he received the National Sports Award. A year later, he began his path to qualify for the 1984 Los Angeles Olympic Games by winning the gold medal at the Central American and Caribbean Games in Havana, Cuba. The following year he won the world championship in Helsinki, Finland and received the Hispanidad trophy. These achievements led him to be considered the “World’s Best Walker” in 20 kilometers by the International Athletics Federation.

In his career he became a specialist in the 20 kilometers of walking and was never outmatched in the competitions in which he participated. He broke the world hour mark at the Softeland Grand Prix by traveling 15,253 meters in that span. Later, in 1984, during the Olympic fair, he won the gold medal in the 20-kilometer walk when he reached the Memorial Coliseum in Los Angeles.

The COM always recognized the dedication and improvement of Canto Gudiño in his training sessions. In fact, he was the first marcher to walk the kilometer in less than four minutes. His average speed was 38 kilometers per hour. Every four years he traveled the distance of 40 thousand kilometers between competitions and training sessions, the equivalent of going around the Earth.

“As a country we can say that Mexico had the first athletics title and it was my turn. So that was the extraordinary thing, because they are the things that mark you and leave your mark. Being the first in something is very important. Fortunately, it was my turn to be the first in many things and in my discipline I was the first to be world champion, ”Ernesto Canto told Esto newspaper after winning the 1984 Los Angeles Olympic Games.

“DEP the great Ernesto Canto. Olympic and World Champion of the 20 kms of march. Sympathetic, agile of mind, good comrade, inspiration of generations. Several JO’s of peers in the programs. He left early, at 61. Life is very fragile. Live. A heartfelt hug to his family. ” expressed @Javier_Alarcon_

José Ramón Fernández also expressed his condolences: “Mexico loses a great athlete, a gold medalist at the 1984 Los Angeles Olympic Games. One of the athletes who inspired many others who followed in his footsteps. A good man who left his mark… Ernesto Canto, rest in peace. ” He said through the account @joserra_espn

David Faitelson, for his part, lamented Canto’s untimely death. “RIP Ernesto Canto, one of the best walkers in the history of Mexican sports. Olympic champion and world champion of the 20 kilometers. ” and “Ernesto Canto will be remembered for his great quality in athletics. He had a fierce and memorable battle with Raúl González in the 1984 Los Angeles 20km. Before, he had been world champion in Helsinki. It’s a shame that he dies so young. Our prayers for his family… ”, he said through @Faitelson_ESPN. (GG) (INFOBAE)