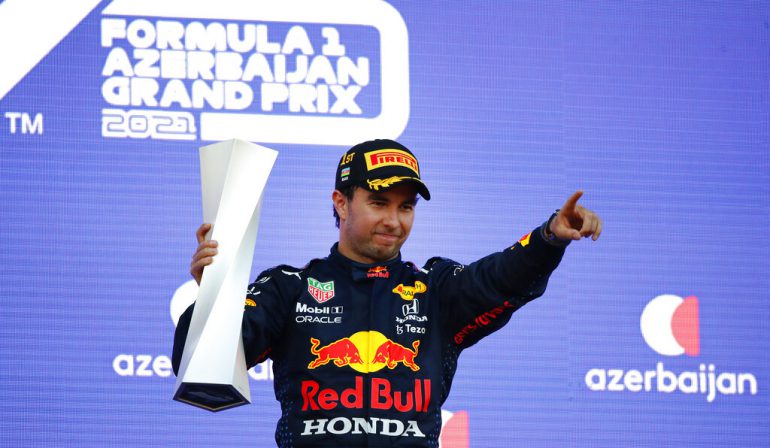 Mexican Sergio Pérez won this Sunday in the Azerbaijan Formula 1 Grand Prix after a chaotic race on the Baku street circuit, signing his first victory with the Red Bull team.

‘Checo’ Pérez beat the German Sebastian Vettel (Aston Martin) and the French Pierre Gasly (AlphaTauri), who completed the podium in a race in which the two top contenders for the world title, the Dutch Max Verstappen (Red Bull) and Briton Lewis Hamilton (Mercedes) failed to score.

The victim of what appeared to be a tire problem, Verstappen lost control of his car with five laps remaining and collided with the safety barriers. The Dutchman was able to get out of the vehicle without problems, but had to leave.

You can also read:  Nani Roma will participate in the Inca Challenge in the dunes of Peru

After a half-hour break to clean up the debris, the race resumed and Pérez achieved the victory. “I am very happy today, normally Baku is a bit of a crazy race and I feel sorry for Max,” said the Mexican.

“He deserved to win today and it would have been very good for the team to finish first and second, although the win is a fantastic result,” added Pérez, whose love story with the Azerbaijani GP continues to grow, having achieved two third places with Force India. , in 2016 and 2018.

It was Pérez’s second F1 triumph, after he achieved last year in Bahrain, when he wore the Racing Point team colors.

You can also read:  Max Verstappen wins the Spanish F1 GP and takes the lead in the World Cup

Charles Leclerc (Ferrari), who had achieved pole position, finished fourth, while Hamilton was 15th, out of the points, after an unusual driving error on the penultimate lap.

All weekend he had a surreal script. Hamilton, second in the standings, took the lead on the second lap, overtaking Leclerc.

The F1 king commanded to a standstill in the stands that was too long, ten laps later, which allowed Verstappen and Pérez to get past him.

With a Hamilton unable to overcome the Red Bulls, the podium seemed determined until Verstappen went against the protections.

The ‘Checo’ won, seconded by a veteran like Vettel, 11th on the starting grid, awarded in his original strategy of changing tires late, and by Gasly, who had to hold Leclerc, fourth, and the British Lando Norris ( McLaren), fifth

Esteban Ocon (Alpine) had been the first to drop out due to engine problems after three laps. (GG) (AFP)