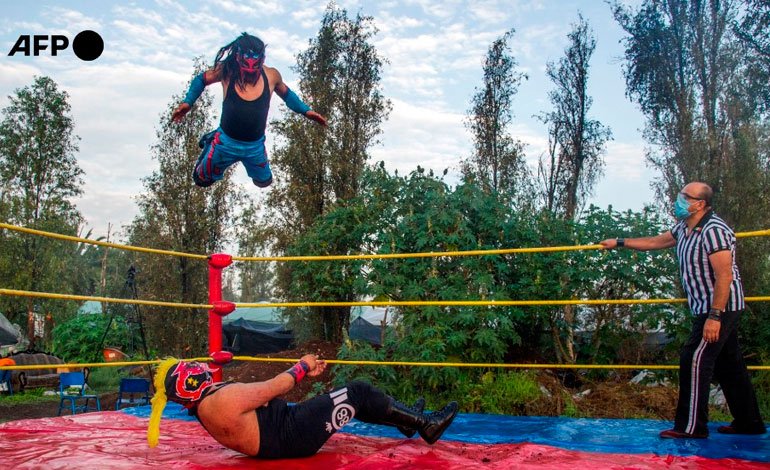 Dawn breaks and a dozen sturdy Mexican fighters board a boat heading to the chinampas, islets of Lake Xochimilco, its new arena before the closure of coliseums due to the coronavirus pandemic.

The ring and the vegetation of the place make up the recording set of a show of acrobatics, blows and insults that will be broadcast online to raise funds and alleviate the crisis in the sport of costalazos.

Without an audience, the hubbub of the sand has been replaced by birdsong in this Mexico City nature reserve. But the bravery of the gladiators and their mystique remain intact.

“As right now there is the pandemic, we could not do it in a closed place, where we previously had the sand, so we decided to take this to this magical place that are the chinampas of Xochimilco,” he tells AFP Ciclónico.

24 years old, this muscular fighter uses on his knee pads the image of an axolotl, an amphibian endemic to Xochimilco similar to a salamander.

You can also read:  "The Tyson del Abasto" fell in Russia

“Oh, what a nice ring!” Sighs another combatant when he sees the solitary strung in the middle of mounds of earth, vegetable crops, plants and plastic pots that some used as weapons against their rivals.

On a tree, a green piñata in the shape of the new coronavirus and a face mask recalls the 47,746 deaths and 439,046 confirmed cases of covid-19 in this country of 128 million inhabitants.

Baptized “Chinampaluchas”, the show will be broadcast next Saturday at a price of 30 pesos per digital ticket ($ 1.35). The money raised will be distributed among the masked people.

The show included a stellar match and three preliminaries, whose keys, plates and huracarranas (submission maneuver) were narrated by two passionate announcers as if they were in the Arena México, the sacred venue of this widely popular sport.

The epidemic was put aside with moments of emotion as when Yoshioka, a large Japanese fighter, tried to remove the mask from Thunderstorm under the cry “Not with the mask, sir!” of the referee, who watched the fight with glasses and a mask.

Also, when X-Devil and Gran Felipe Jr. fell on a plastic table destroying it.

In the midst of the silence, the whistles and bellows were more perceptible as when Shocker, 48, who uses the slogan “1,000% handsome,” prescribed a well-known Mexican insult to Mr. Jerry: “Not on the face, son! of your fucking mother! ». Or when the referee asked for “healthy distance” before the matches.

However, everyone missed the screams, mentions and applause from the audience.

«You feel an emptiness, a hole, because the public motivates you, the public makes that energy, that hyperactivity, that desire to win grow in you. Yes, I miss him a lot, ”admits the blond Shocker.

This experienced fighter, who gets around the lack of money thanks to his taco business, acknowledges that returning to the ring was hard due to physical inactivity, which made him fat.

You can also read:  Pacquiao announces his return to the ring in August against Spence Jr.

“Yes I have fought (against the economic crisis), but thank God there is enough to eat, which is the most important thing, there is health that is essential,” he emphasizes.

So “when they told me about this project I said ‘go ahead’. I feel comfortable. Yes I get tired, apart from that I gained a lot of weight, but the body recovers », he adds.

He was not the only one who felt the excitement of returning to the ring. Aguila Mágica, who faced Centella de la Muerte in the first fight, also missed the adrenaline rush.

“It’s good, I feel liberated,” said the strongman, who combines the struggle with his work as a construction worker.

Confident that the virtual function will be a success, the organizers plan to continue having the chinampa as sand. The next meeting, instead of dawn, will be at night, what they hope, attract more spectators. AFP (HN)