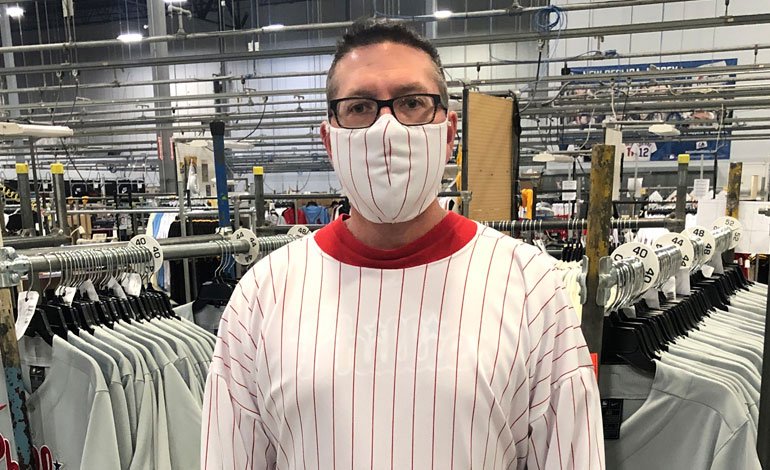 The Bryce Harper jersey that may have worn the proudest Philadelphia Phillies fan in this Major League Baseball campaign is now a face mask that protects a doctor in the fight against the coronavirus pandemic.

Fanatics, the company that produces uniforms for the majors, has suspended making jerseys. Instead, it is using polyester fabric as a raw material to create masks and surgical gowns for hospitals in Pennsylvania and surrounding states.

The thin black stripes on the New York Yankees uniform were worn on the day the campaign should have opened. Only that they appeared in the protective equipment that the company produces.

You can also read:  Encarnación, Cruz and Odor maintain the explosive power of their bat

Fanatics president and founder Michael Rubin was watching television last week when he was struck by the idea of ​​converting his Easton, Pennsylvania facility into a COVID-19 equipment factory.

Pennsylvania Governor Tom Wolf and State Attorney General Josh Shapiro contacted Rubin in the days after. They told him that the state urgently required more masks and gowns.

Fanatics developed a prototype that was approved by the state emergency agency. By Tuesday, the company halted production of all baseball jerseys.

You can also read:  Effa Manley, only woman inducted into MLB Hall of Fame

Rubin, the NBA’s limited partner in rights to the Philadelphia 76ers and the NHL with the New Jersey Devils, said Major League Baseball Commissioner Rob Manfred gave his go-ahead to stop producing the jerseys.

“We have a million yards (meters) of fabric that we were going to make these baseball uniforms out of, what would you think if we took that fabric and made masks and gowns?” Rubin told The Associated Press, when he recalled what was posed to the commissioner.

“Marvelous. I want to do it right away. The most important thing is that we can help the heroes on the front lines, and baseball can play a role in this. “

You can also read:  Dominican Robinson Canó was chosen Player of the Week

With that support from Manfred, production of the jerseys for Harper, Aaron Judge, Mookie Betts and the rest of the baseball stars ceased. Each garment was going to sell for about $ 300.

The company manufactures uniforms for Major League Baseball and Nike.

Fanatics began creating the masks and gowns on Tuesday. Robin is confident of producing nearly 15,000 parts per day. AP