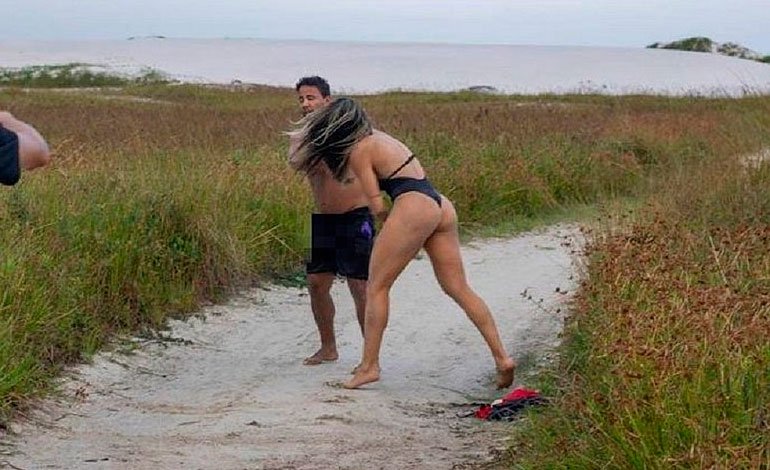 The news with some photos has spread fast on the internet and Joyce is being described as an “icon” and a “goddess”. Something that is in a way linked to her nickname on the ring, ‘Princess Fiona’, the muse of the ogre Shrek.

He usually trains against men weighing 65 to 90 kilos but, outside of the mat, he had never used the experience he has in martial arts such as jiu-jitsu (he is a blue belt), Muay Thai (a navy blue belt) and English boxing (an amateur level). She never pulled her knowledge out of a fight before until this week, when she and a friend were caught by a man on the beach in the middle of a photoshoot. At first, Joyce saw the man, not yet identified by the police, and believed that he was waiting for someone from the family.

You can also read:  Colombia defeats Cuba 3-2 in first half semifinal of world boxing series

“When I took a better look at him, I saw that he was as he was: with his pants down, standing up. People pass by all the time, even children ”. The fighter said that she tried to talk to him: “Uncle, are you kidding? Keep that there ”. According to Joyce, the man was with his penis “visibly erect, making noises and moaning.”

He did not stop even when he saw the two friends about two meters away. “He kept masturbating and added, ‘Why? you do not like? Come here'”. There, Joyce admits that he lost his papers: “after that ‘come here’ I went for him very quickly, I didn’t think of anything, I went into a state of ecstasy because it was really something very surreal. Normally, people you catch doing things like that right away deny it, ‘no, no’. He did not, he continued ”. His legs looked red from all the kicks he hit her. He was punched back. “The blow made me even more angry, I wanted to kill him, beat him to death.”

Joyce is 1.75 meters tall and weighs 70 kilos, but in fighting season she lowers her weight by as much as 10 kilos to be able to compete. His idol is the Brazilian Cris Cyborg, a UFC fighter.

“Since I was little I was always a fan of wrestling. Unfortunately I can’t make a living from it, but I train to the max to be ready when the opportunity comes ”. She works as a clothing seller, promoter, hairdresser and real estate dealer.

The confrontation with the man had two positive things: first, detaining an exhibitionist and, second, the invitations that began to arrive from MMA events. “When that guy saw that I was really going to hit him, he started screaming. A boy got in the way and he took the opportunity to run ”. She filed a complaint at the police station.

You can also read:  The Hand of «god», Maradona has left us

In martial arts, Joyce says, fighters are taught not to fight in the streets, “but I didn’t want to stop hitting him, no.” (Yahoo / sports)