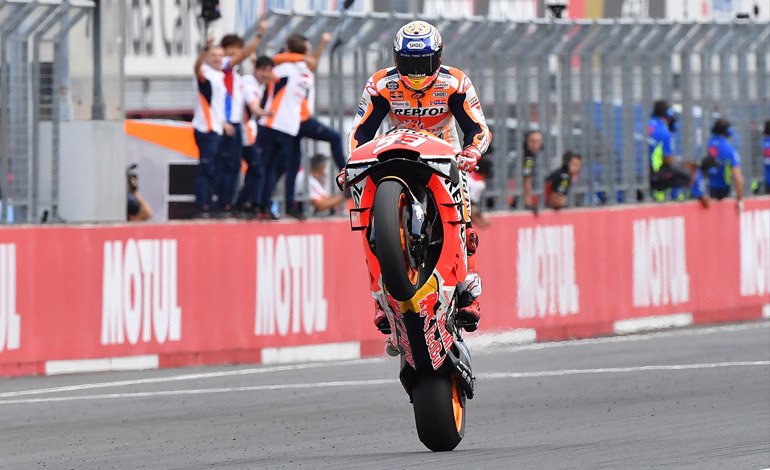 With more than four months of delay due to the new coronavirus pandemic, the MotoGP World Championship will finally begin this weekend in Jerez, where the Spanish Marc Márquez will try to start a season on the right foot in which he could match Valentino Rossi with a seventh title in the queen category.

– Together with his brother for a season –

His reign is being impressive and at Honda he will also have as a partner, only for this year, his brother Alex, Moto2 champion last year.

Marc Márquez will also have the incentive to start the 2020 World Cup at home, at the Jerez circuit, which will host the first two events of the season, barely a week apart. The championship will then move to the Czech Republic, for one race, and then to Austria, where there will be two.

You can also read:  Rosberg: "Red Bull seems to be getting better and better"

The time has come to make the bikes roar, after a long period of confinement and many doubts about whether the World Cup could be played this year.

Eight months have passed since the last MotoGP Motorcycle Grand Prix, since in Qatar, in March, only the Moto2 and Moto3 races were raced. Since then, no evidence has been disputed for the pandemic.

The duo of brothers in Honda will be ephemeral, since Álex’s place will be occupied next year by his compatriot Pol Espargaró, which will force the youngest of the Márquez to ‘descend’ to the Honda satellite team, LCR, a decision that will not Marc likes it.

At Yamaha, the start of the year is more marked by the future of Valentino Rossi, which raises questions.

You can also read:  Todt asks to reduce the number of road accidents by 50%

In 2021, Rossi will be replaced by the young Frenchman Fabio Quartararo, revelation of 2019. The ‘Doctor’ will then have to decide whether to continue his career in a minor team or whether to put an end to it.

The first races of this 2020 World Cup could be decisive to get an idea of ​​their ability to fight for the top positions or even for a final victory.

Quartararo, awaiting his jump, will continue in the Yamaha satellite team, SRT.

Ducati, who repeats with Andrea Dovizioso and Danilo Petrucci, has not won the world title since 2007 and could only be third last year, behind Honda and Yamaha.

There are rumors of disagreements between ‘Dovi’ and Luigi Dall’Igna, the brand’s engineer, about the steps to follow for the development of the bike, which thickens the atmosphere a lot before starting to circle the circuits.

You can also read:  Pedrosa is operated on his forearm is low from Honda

Suzuki continues with ‘outsider’ status. Last year he achieved two victories thanks to the Spaniard Álex Rins, but he did not get on any more podiums.

This year his challenge will be to be more regular, to try to confirm the good feelings of the preseason rehearsals in February, before the pandemic cut off everyone’s preparation.

The KTM and Aprilia remain on the grid.

In the case of KTM, the bet is again on Pol Espargaró, backed by South African rookie Brad Binder, Moto2 runner-up last year.

Aprilia will not be able to count on Italian Andrea Iannone, who is being investigated in a doping case and will be replaced by Briton Bradley Smith, in the first races.