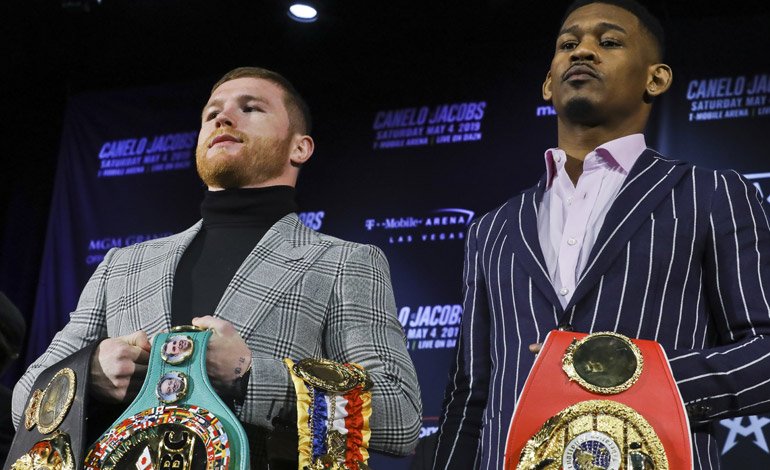 The scrolls are awesome. Mutual respect is not in doubt. The determination is through the roof.

So why is the middleweight title unification fight between Saúl “Canelo” Álvarez and Daniel Jacobs going to be a classic? The fight of the year?

If you ask both champions, they do not hesitate to warn that this is what will be seen on May 4 in Las Vegas. And even if that is to publicize the lawsuit, there is an aura that surrounds this confrontation.

“He’s a fighter who’s had a tough life, with a strong personality,” Alvarez said Thursday of Jacobs, who is nicknamed the “Miracle Man.”

Jacobs overcame a battle with bone cancer to get back in the ring.

“He is persistent. That makes him a fighter with more desire to win, that is also complicated and that is when good fights are made, “added the Mexican star in an interview with The Associated Press. “But I like that, because I have the same mentality.”

At 28, Álvarez is considered the best of the moment. His epic fights against Gennady Golovkin – a draw and a close win, with a third fight in the pipeline – are the highlights of his 51-1-2 record with 35 knockouts.

You can also read:  Jacobs retains middleweight crown in brutal fight with Mora

He was proclaimed world champion in three different divisions after knocking out Rocky Fielding in three rounds to capture the WBA super middleweight title in December. Now go back to your ideal division. And the one of the middle ones is loaded with rivals of care.

The 32-year-old Jacobs was the logical opponent, and that’s a good thing for boxing, considering that logic rarely plays a part in determining matchups. Since battling 12 rounds with “Triple G” Golovkin and losing a close decision two years ago, Jacobs has three wins and seized the IBF title. Adding Alvarez’s WBA and WBC belts excites him but isn’t the only motivation for the Brooklyn native.

“I never get bored of inspiring people and telling them my story,” he told the AP. “Strangers, people I come across at airports while traveling, react fascinated because it is an encouraging story. I feel blessed to receive a second chance to live and have a career, and that is the message I want to take to the world. That is special, and I want to inspire more people ”.

You can also read:  Canelo Álvarez wins by unanimous decision over Jacobs and unifies middleweight titles

The fight will be on the eve of the Cinco de Mayo holiday, a special date for Mexicans residing in the United States. Álvarez values ​​the opportunity to get in the ring “to make my country, my family, my fans feel proud”,

But he knows that a heads-up with Jacobs will be demanding.

He loves the challenge.

“He is a very complete fighter who knows how to handle himself very well in the ring, with all his experience and many skills,” said Álvarez, highlighting that he has studied the video of many of Jacobs’ fights to analyze an American rival who scores three inches (7.5 centimeters) tall. “He knows how to change from left-handed to right. Fight of both guards. That can complicate the fight. Everything indicates that it will be the fight of the year ”.

He also studies his own fights.

You can also read:  Terry Flanagan revalidates the world title against Petr Petrov on points

“I am a fighter who likes to learn, I care about learning. Every fight I like to improve, learn, do new things. I don’t lose the illusion of continuing to learn ”, he added.

Álvarez’s failures have been few since he lost a decision to Floyd Mayweather in 2014, a fight in which Canelo acknowledges that he was not yet seasoned, even though he had already obtained two super welterweight titles. He has grown larger since then, and only Golovkin has been able to put the Mexican in a bind in the past four and a half years.

Jacobs will offer him a fight care challenge that is part of Alvarez’s contract with DAZN, the streaming service, of $ 365 million for 11 bouts.

“I am someone who understands boxing and what it takes to be one of the greats. This is my chance and I have the goal between my eyebrows. Canelo always fights with the best he has, and so do I. He’s used to big moments and this means everything to me. My plan is to take the initiative and steal the show. ” AP