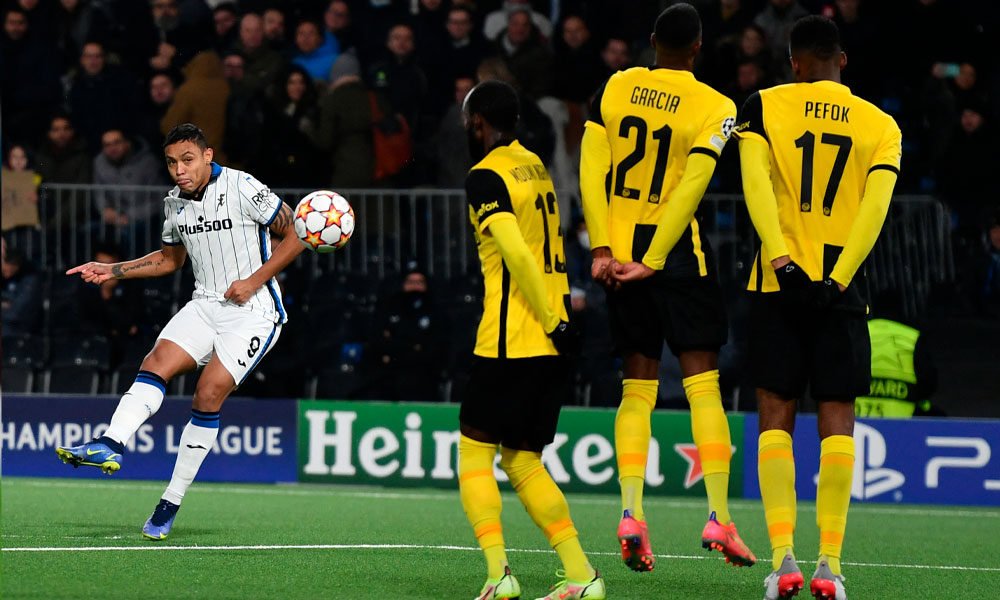 The magic of the Colombian Luis Muriel, who signed the final 3-3 in the 88th minute by transforming a direct free kick into his first ball touched after jumping onto the field, alleviated the problems of an Atalanta who will play in two weeks the pass to the second round Champions League in a “final” against Villarreal.

Gian Piero Gasperini’s men were ahead 2-1 until the 80th minute with goals from Colombian Duván Zapata and Argentine José Luis Palomino, but the Young Boys came back in the space of a few seconds and brushed against a triumph that could open unexpected horizons in the fight for the second round, before Muriel, just taking the field, scored a great foul that determined the final 3-3.

Sevilla’s defeat to Manchester United gave Atalanta an unbeatable opportunity to overtake Unai Emery’s team and get closer to their third consecutive pass to the round of 16.

However, they ran into the faith of the Young Boys and did not go beyond a draw that certified United’s pass to the second round and that left Villarreal as second, with seven points, one more than Atalanta, with six; the Swiss club closes the table with four points and the Europa League as the last hope.

You can also read:  Fede Valverde renews with Real Madrid

Everything will be decided on the last day, at the Gewiss Stadium in Bergamo, where Villarreal will shield their pass to the second round with a draw.

And that Atalanta was twice ahead in Switzerland. It only took Duván ten minutes to sign his second goal of the campaign in the Champions League and reach double digits this season, if you also consider the eight goals scored in Serie A.

The Cali forward controlled an assist from Swiss Remo Freuler, turned around and struck down the goalkeeper to put down a game on a delicate field, in which Manchester United fell in its debut.

Despite the fact that United was close to self-destruction in that match, as the Englishman Aaron Wan Bissaka saw an avoidable red and the then Norwegian coach Ole Gunnar Solskjaer replaced the Portuguese Cristiano Ronaldo with little lucidity, the Young Boys had shown power, intensity, organization and great confidence.

You can also read:  Mexico ties in Panama and maintains the lead

Some values ​​also seen this Tuesday and that caused a culminating reaction on the brink of halftime with a goal from American Jordan Siebatcheu, who sent the two teams to the locker room with 1-1.

At Atalanta the duel was complicated, because Davide Zappacosta was also forced to retire due to injury, while the Young Boys continued to arrive dangerously in the area of ​​the Argentine goal Juan Musso.

But after the break, Atalanta jumped onto the pitch determined to attack and, after six minutes, Palomino, a defender, scored a great goal with an elegant curved left-footed shot that restored the advantage to Bergamo.

It was his first goal this season and the Argentine, formerly of Ludogorets, San Lorenzo and Argentinos Juniors, had not seen the door since March.

Atalanta savored victory, but three minutes were enough for everything to change. The Swiss Vincent Sierro and Sylvan Hefti came back for the Young Boys between 82 and 84.

You can also read:  Messi injured

Against the ropes, Gasperini gave way to Muriel and the Colombian, in his first ball touched, signed a great goal that allowed Atalanta to leave the Swiss event with more optimism.

Incidents: Match corresponding to the fifth day of group F of the Champions League played at the Stade de Suisse before about 30,000 spectators. EFE