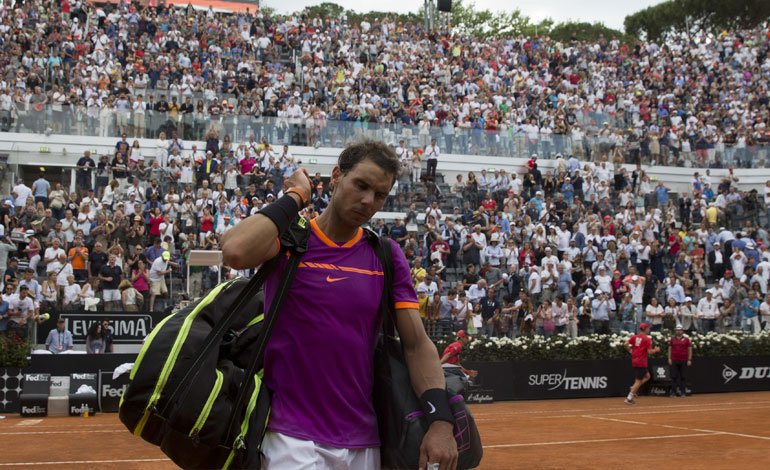 The Spanish Rafael Nadal, who had won the last three tournaments he had played on clay (Monte Carlo, Barcelona, ​​Madrid), was eliminated in the quarterfinals of the Masters 1000 in Rome after losing to Austrian Dominic Thiem 6-4 and 6-3.
Thiem thus claimed revenge, as he was defeated by Nadal in the finals in Barcelona and Madrid. The young Austrian will face the winner of the duel between Serbian Novak Djokovic and Argentine Juan Martín Del Potro in the semifinals.
Thiem, seventh world player and semi-finalist last year at Roland Garros, this time found the formula for Nadal, who will not be able to get an eighth title in the Roman arena.
Flawless from start to finish, in what was by far the best game of the tournament so far, the 23-year-old Austrian was very aggressive in the game, hitting hard both forehand and backhand.
Nadal thus suffers his first defeat in the preparation on earth for Roland Garros, where he aspires to a tenth title. Thiem is further confirmed as one of the contenders for the title on the clay of Paris, after showing that he can surpass the king of this surface.
On the other side of the table, young talent Alexander Zverev and American John Isner will meet in the semi-finals.
Zverev, 17th in the world, beat Canadian Milos Raonic, sixth in the ATP ranking, in the quarterfinals, 7-6 (7/4) and 6-1, while Isner (24th world player) defeated Croatian Marin Cilic (8th) by 7-6 (7/3), 2-6 and 7-6 (7/2).
The tournament in Rome, the last Masters 1000 before Roland Garros, is played on clay and distributes 4,835,000 euros in prizes to its men’s team.

You can also read:  Frenchman Gaël Monfils wins the 9th title of his career in Montpellier