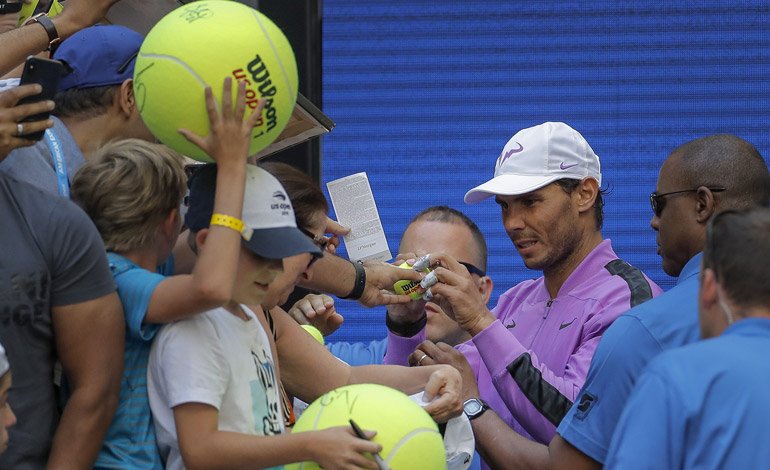 Rafael Nadal rests at his home in Manacor after having won the United States Open, the fourth success in New York and the nineteenth Grand Slam of his career.

Nadal starred alongside Russian Daniil Medvedev in one of the most epic Grand Slam finals in recent times. Having become the player who wins the most over thirty, he does not seem to give relevance to the possibility of catching up with Roger Federer, the tennis player with the most ‘best’ in history. Twenty major trophies illuminate the Swiss’s career. Nineteen, after winning in New York, that of the Spanish.

The Spaniard is recovering from the effort and emotions experienced after the victory against Medvedev. He does not look at the calendar. Only rehabilitate the body after exhaustion.

The challenges have become a personal matter for the Spanish player who, at 33 years old, still acknowledges having “ambition and motivation” in tennis. Of course, the Spanish tennis player continues on his way regardless of any “spirit of revenge” and regardless of what can be said about him.

«Just as many people doubted that I could play for so many years I too. I doubt now and I have always doubted. But here I am and in the end it is a day-to-day issue. I am happy with what I do. And if my body allows me to train daily and I enjoy the competition… », says Nadal, who wants to be, above all, competitive.

You can also read:  VIDEO.- Tennis player broke the ball with his serve

“What motivates me and my goal is to aspire to the maximum for as long as possible,” says Nadal, who sees as new and immediate challenges the Masters Cup that he has not yet managed to conquer and the new Davis Cup, which is starting next November in Madrid, as the culmination of a dream year.

Nadal acknowledges being “fatigued” after the waste and physical demands that the victory against Daniil Medvedev required to add his fourth success in New York and raise the number of Grand Slam accumulated to nineteen.

“I’m tired; the truth is that I am not recovered. I am physically touched “, recognizes the Balearic tennis player in a telephone meeting with the media that have accompanied him in New York.

The recovery after the effort and the emotions experienced hours after the battle with Medvedev now monopolize the interest of Nadal who prefers to park provisionally, the definition of what remains of the calendar. Even so, it takes on the Tokyo Olympics as a somewhat more distant challenge.

At 33 years of age and only one ‘major’ from equaling Roger Federer as the tennis player as the greatest number of Grand Slams in history Nadal prefers to wait to see ‘how his physique evolves in the coming days and to speak with his coaching staff to define your next challenges.

You can also read:  Kuznetsova and Gavrilova will play the final in Moscow

But the Spaniard has two events highlighted in his “immediate calendar”: the new Davis Cup and the London Masters Cup, which completes the circuit and is the only renowned tournament that still resists him.

“Asia remains to be defined a little,” admit Rafael Nadal. “Beyond that, everyone knows what the Olympic Games represent for me and I will do my best to try to reach Tokyo in the best way possible, with the best possible preparation.”

The Olympic event is part of one of the challenges for Spanish in 2020. They start on July 24 in Japan, right in the middle of Wimbledon and the start of the North American circuit. “But some Games are something special,” insists the Spaniard, who won the gold medal in Beijing 2008 and in the last, in Rio 2016, was fourth, at the gates of the medals.

Nadal is aware that he must dose himself to continue at the highest level. In the final stretch of a great season, with two more Grand Slam on his service record, he takes on the projects as challenges.

“Some Olympic Games do not mark the whole year in tennis as in other sports, such as athletics, and specific planning for it becomes difficult and the calendar complicates a lot,” says Nadal, who recalls that he always lives the Olympic events with great delusion.

Rafael Nadal regrets that Spanish tennis has not been able to take full advantage of the good performance offered in recent decades. The Manacor tennis player is clear that in Spain the “failure” of not taking advantage of the high level of its players has been made. And that this has served to attract resources to support young people.

“We have been doing things for many years that are going to be very difficult to repeat. In the end, what has been achieved in the last 25-30 years is hardly repeatable, by means, by economic capacity… in the end we are competing with other countries that have an economic capacity that is multiplied by infinity practically ”with respect to Spain, Nadal recalls.

In this sense, the number two in world tennis although very close to the first, Novak Djokovic, points out that the four countries that own a Grand Slam (Australia, the United States, London and Paris) «have a budget infinitely superior to the ours for tennis.

«In Spain we have had a failure in this regard and it is that during all these years of great boom in Spanish tennis we have not been able as a Federation to have our own tournament, which generates annual income that can be used to promote our sport and to help to the new generations that are coming “, reasons the Balearic. EFE