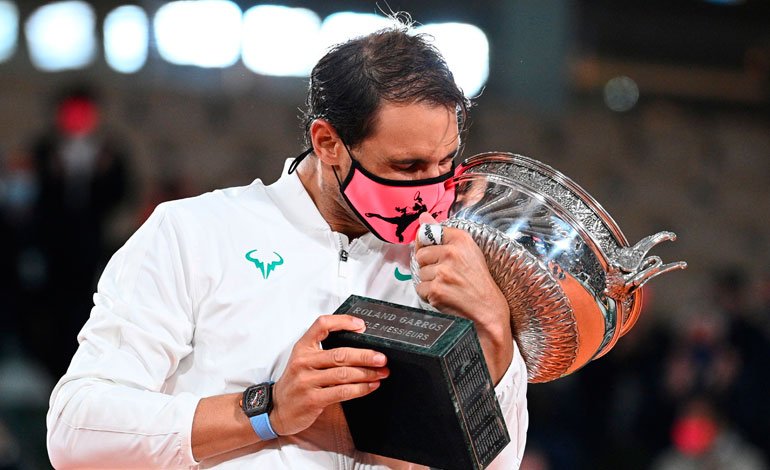 In 2 hours and 41 minutes, the Spaniard disarmed the Serbian to extend his trophy record in the French capital, where he already has 100 victories and only two defeats since winning the tournament for the first time in 2005.

– The most difficult yet –

Three decades later, in the battle for eternity Nadal equals 20 ‘greats’ with his eternal rival Federer, out due to a knee injury, while Djokovic remains with 17.

«I am not thinking today about the 20 titles and Federer. Today is a victory at Roland Garros, which means everything to me, here I have had the best moments of my career », said the Spanish legend with emotion.

Nadal has achieved in this autumn Roland Garros, displaced from spring by the pandemic and played with only 1,000 spectators a day, the most difficult yet.

You can also read:  Wawrinka defeats Baghdatis and conquers his 13th title

Throughout the tournament, he had recalled that conditions were “the worst ever” for his tennis, referring to the “extreme cold,” the new balls, “like stones,” and his lack of shooting (three games in six months).

Everything seemed orderly for the Serbian to achieve his second French great after the one he achieved in 2016. In addition, after a sunny morning, which promised a dry land for the Spanish, just before the game it began to rain and the new roof had to be closed. retractable of the central.

Humidity, rain and roof, the ideal setting for the ‘king of the indoor’ Djokovic.

But Nadal tennis said no. It was starting to compete and the elements were left out. Plugged in and thin legs, with a solid right hand and almost no mistakes, Nadal destroyed an unrecognizable Djokovic, with no ideas, who barely fought in what was his first defeat in 2020 (not counting the disqualification in the second round of the US Open for a hit to a judge).

You can also read:  Puerto Rican Puig retires against Razzano in the second round of Strasbourg

As in his 99 previous victories in Paris, Nadal won the match after winning the first set. In his only two losses, to Robin Soderling in 2009 and to Djokovic in 2015, he had lost the first set.

This Sunday, in this first section, Djokovic, already irregular in the quarterfinals and semifinals, was unable to dominate with his serve, abusing those left in this edition of Roland Garros in which they have become his favorite blow.

In his 55 previous duels -the most repeated game in tennis history-, there was only 6-0, in the final of Rome 2019 that the Spaniard scored.

The second heat started identically to the first. The number 1 was unable to set the pace against an imperial Nadal, dictating the game with a variety of shots, combining his forehand whip with more pumped balls and a cross backhand that took the Serbian off the court.

You can also read:  Angelique Kerber and her new engagement, dealing with the pressure

Djokovic was still out of the game and Nadal was already a rocket who did not bother neither the ceiling, nor the humidity nor the bounce of the ball. Two new breaks without the Serbian having a chance to break gave him 2-0 in 47 minutes.

The Spanish closed the first two sets with only 6 direct errors, 30 by Djokovic.

In the third set Djokovic finally broke Nadal’s serve and for the only time in the match he was seen roaring with rage. It was a mirage.

A direct serve gave the Spaniard his 13th title. The king of Paris knelt on his beloved clay, to which he will return in seven months to try to continue writing history. AFP (HN).