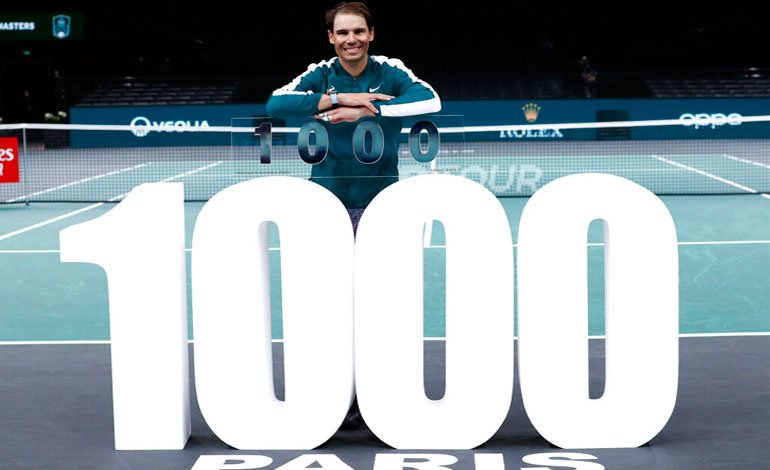 “I am proud of a lot of things, but I have faced several challenges in my career in terms of injuries. I’ve always had the passion to carry on and the humility when things didn’t go the way I expected. It’s a great achievement for me, ”said the 34-year-old Spaniard, honored on the track.

“Something negative about the 1,000 wins is that it means that you are very old, but also that you have had a long career,” he added.

You can also read:  Muguruza beats Williams and wins at Roland Garros

– Thompson, next rival –
Now the winner of 20 Grand Slam tournaments will seek a place in the quarterfinals on Thursday against Australian Jordan Thompson.

From less to more, it was difficult for Nadal to find the rhythm after three weeks without competing, with a drastic change of scenery; from the clay of his beloved Roland Garros, to the ‘indoor’ conditions of Bercy, one of the few tournaments he has never conquered.

In addition, in the first set Feliciano gave a recital to serve (22 aces in the match) against a rusty Nadal to the rest -0/1 in break balls.

The second heat began the same, with the 39-year-old Spaniard polishing his serve and the winner of 20 Grand Slams without finding an answer.

In a left-handed duel, Nadal wanted to move Feliciano and he succeeded when he put the ball into play. But he made a lot of unforced errors.

You can also read:  Bertens to the final after injury to Sara Sorribes

With both tennis players saving their service, in an open match with options for both and errors also on both sides, the ‘tie break’ was reached in the second set.

Sudden death started with little play and big serves. Finally sharpened with the rest, Nadal achieved the ‘mini break’ and stood 4-3. He hit the third set ball to take the game into the third set.

What he had not achieved in the previous two sets, Nadal achieved from the beginning in the third. He finally had his break, which released his tennis that led to the historic 1,000 victory.

Before that, Argentine Diego Schwartzman, ninth world player, beat Frenchman Richard Gasquet (56th) and will face Spanish Alejandro Davidovich in the second round.

You can also read:  Frenchman Gaël Monfils wins the 9th title of his career in Montpellier

The Argentine, a recent Roland-Garros semi-finalist and currently the best placed to win the last available ticket for the end-of-season Masters, had no difficulty winning.

Schwartzman will secure a place at the London Masters if he reaches the semi-finals in Paris, but will qualify even if he doesn’t, as long as Pablo Carreño, Milos Raonic or Stan Wawrinka don’t win the French title.

“I have it in my hands, but I must say that I am watching the other games,” said the sixth seed. “I want to be in the Masters and I will give my best on the court,” said the 28-year-old Argentine. AFP (HN).