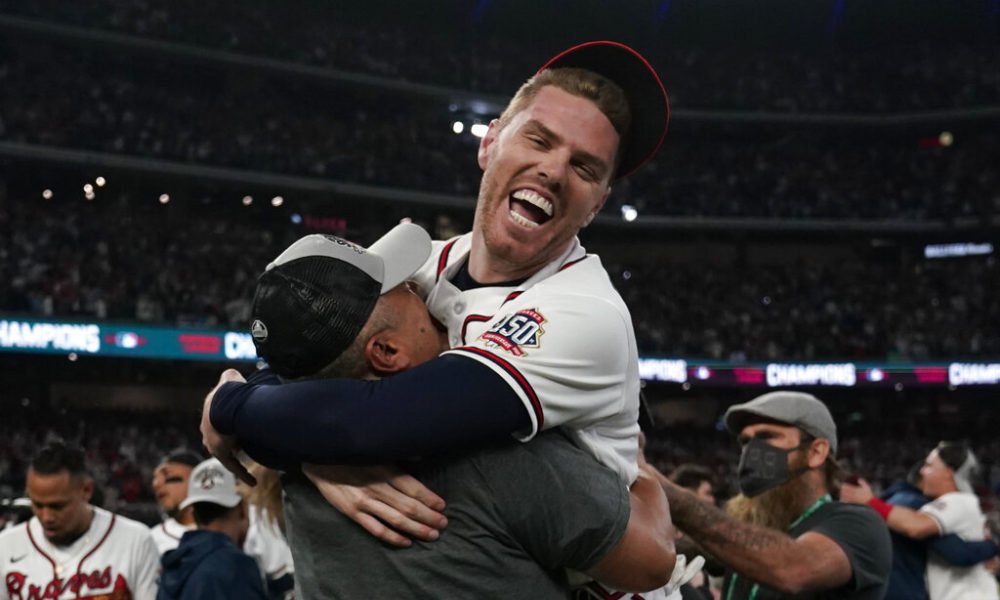 The 26-year celebration continued when reality began to haunt the Braves.

Has Freddie Freeman, the reference of the franchise for the last decade, played his last game in the Atlanta uniform?

“Did you think you would be sitting here without a contract? Not really, ”Freeman acknowledged when interviewed by Fox during the post-game celebration in Houston, shortly after he caught the ball thrown to first base for the last out. This is an absurd sport, an absurd business. But everyone knows where I have my heart and that is with the Atlanta Braves.

Freeman’s future is the most pressing issue during the offseason for the Braves, who capped an unlikely streak to win their first World Series since 1995 by beating the Houston Astros 7-6 in Game 6 on Tuesday night.

It’s very difficult to visualize the Braves defending their hard-earned title without number 5 at first.

The Braves hoped to have 32-year-old Freeman long-term insurance before the season ended, but the parties were unable to reach an agreement.

“I have been here since I was 17 years old. Almost half of my life has been spent in this organization, ”said Freeman, who declared himself a free agent Wednesday. “It means everything to me to wear the Braves uniform every day. Then hopefully I can continue to do so. “

The uncertainty over Freeman has the city a bit haunted, even as they prepare for the parade on Friday to celebrate Atlanta’s second championship in America’s four major leagues of professional sports.

You can also read:  Ervin Santana throws complete game and stands out with the bat

If Freeman returns, the Braves should be favorites to win their fifth straight title in the NL East, and one of the top contenders for another championship.

Ronald Acuña Jr, their most dynamic player, is expected to be fully recovered to reappear sometime in the first half of the 2022 campaign, after the Venezuelan was out in July with a knee injury.

Marcell Ozuna could also return in 2022, possibly as a designated hitter if that rule is adopted by both leagues next season. The Dominican slugger missed most of the 2021 campaign after breaking his hand and then being arrested for allegedly assaulting his wife in a domestic dispute.

Freeman aside, the rest of Atlanta’s dynamic infield – Ozzie Albies, Austin Riley and Dansby Swanson – are tied up for the upcoming season. Ditto for the top three starting pitchers – Charlie Morton, Max Fried and Ian Anderson – as well as key bullpen chips that dominated the playoffs: closer Will Smith, as well as Tyler Matzek, AJ Minter and Luke Jackson. Travis d’Arnaud will be back as catcher.

You can also read:  More than $ 25 million dollars separate Yankees and DJ LeMahieu from a deal

The Braves don’t want to wait another 26 years to win their next title.

“Year after year, it didn’t happen. This year it was unlikely, ”Freeman said. “We hit every bump, we took every hit this year and somehow we got to the other side. It is an incredible group ”.