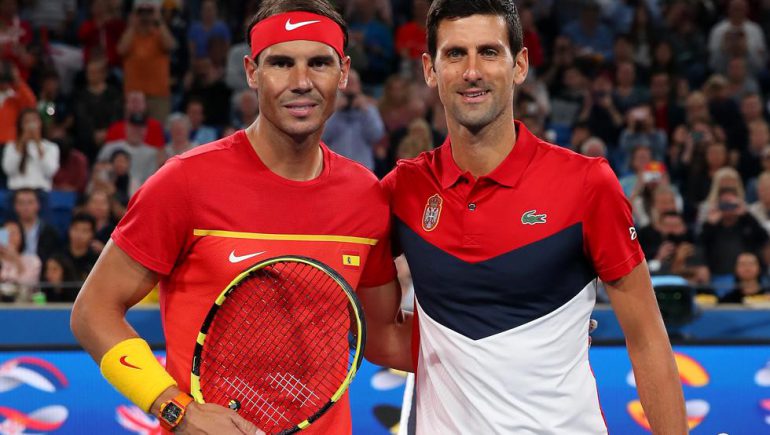 The historic duel between Novak Djokovic and Rafael Nadal will have its chapter 58 next Friday for a place in the final of Roland Garros, a tournament that this Wednesday was left without its current champion, the Polish Iga Swiatek.

It will be the 58th meeting between the two tennis stars, a classic that for now dominates the Serbian by 29-28, although the Spanish won the last two.

“It was the game that everyone expected and here we are again both,” said Djokovic at a press conference. “He is the biggest rival in my career.”

“Last year the final dominated, but the conditions will be different from last year” because the tournament was played in October due to the pandemic, with more cold and humidity.

“Few players have managed to beat him here, but the level of tennis that I have played in recent weeks in Rome, Belgrade and here gives me confidence to think that I can win,” he said.

Nadal suffered against Schwartzman during the first two and a half sets, but with 3-4 in the third in favor of ‘Peque’, the world number 3 put one more march and chained nine consecutive games to seal his 105th victory in 107 games played in Paris.

«It was a whirlwind, he didn’t let me play practically any points. Every ball that was not very good of mine, he made ‘winner’ after ‘winner’ “, admitted Schwartzman to explain what happened since the end of the third set.

“It hurts to lose again (Nadal has won him 11 matches out of 12), but you have to analyze who is in front, who is unbeatable here and that you enter the court against the best in history in this tournament.”

At least, the ‘Peque’ will have the consolation of having broken a streak of 36 sets won for the Spanish in a row.

You can also read:  Catrachos tennis players get ready for Davis Cup

The match was played before some 5,000 spectators, the best entry so far in the Philippe Chatrier, taking advantage of the fact that as of this Wednesday the restriction measures in France have been relaxed due to the health crisis caused by the pandemic.

«The environment and the energy that people transmit to you is not comparable. The games are lived with another emotion ”, admitted Nadal in a press conference.

His rival in the semifinals will be Djokovic, who played a very solid match against Berrettini, without giving up his serve once and to whom only two errors in the tie break of the third set prevented him from closing the match earlier.

The anecdote came at 10:55 p.m. local time (8:55 p.m. GMT), when the tournament organization sent the two players to the changing rooms due to the refusal of many of the 5,000 spectators who had seen the start of the match to leave the field in order to comply with the curfew imposed by the pandemic, which entered into force five minutes later.

In the women’s team, with the elimination of Swiatek, no Top 10 player will play the semifinals, something that had never happened at Roland Garros since the beginning of the Open era (1968).

You can also read:  Monica Puig debuts with triumph

And in Grand Slam tournaments there is only one precedent and it was in the Australian Open in 1978.

Swiatek, who had eleven consecutive victories at Roland Garros, without also giving up a single set, was surprised by the Greek Maria Sakkari, 25 years old and number 18 in the ranking, whose pulse did not tremble despite playing for the first time some quarterfinals in Paris and that ended up winning by a double 6-4.

While he needed medical assistance for physical problems in his right thigh at the start of the second set, Swiatek was the entire match in tow for Sakkari.

The Greek player will look for a place in the final on Thursday against the Czech Barbora Krejcikova, 26 years old and number 33 of the WTA, who achieved the pass to the semifinals by defeating the American Coco Gauff 7-6 in the first match of the day (8/6) and 6-3.

On the other side of the table, the Russian Anastasia Pavlyuchenkova (31st) and the Slovenian Tamara Zidansek (85th), classified on Tuesday’s matchday, will play for the final. (GG) (AFP)