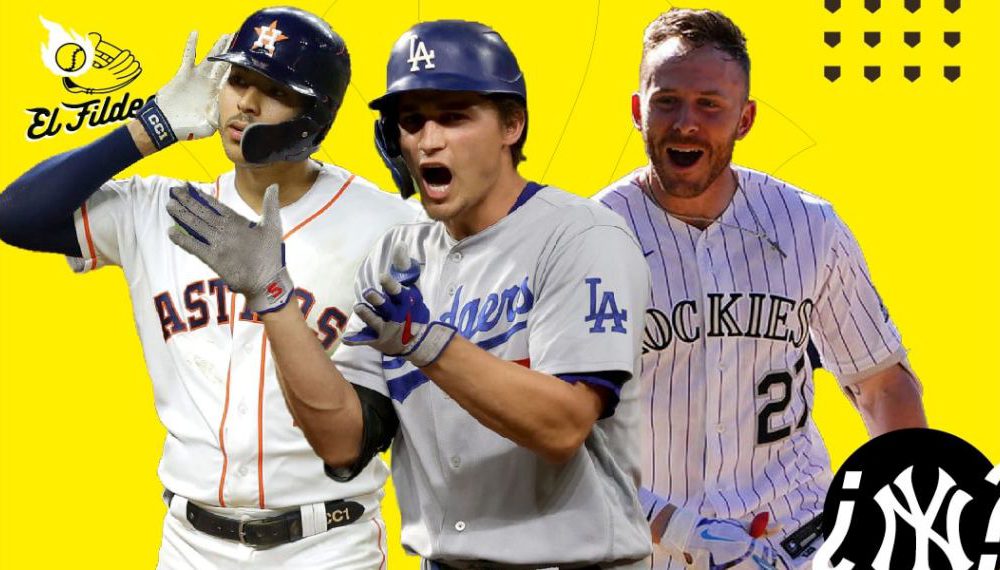 According to analysts, 3 superstar shortstop players will be entering MLB free agency this winter: Carlos Correa, Trevor Story and Corey Seager… and the Yankees are targeting all three.
It seems that this 2021 with the experiment of Gleyber Torres in the shortstop, the Yankees have only prolonged the inevitable: they need a shortstop. But not just anyone, an SS bully at the height of Derek Jeter and the history of the ninth most powerful in the Major Leagues.
3 are the options on the horizon, the three with a maximum cost of about $ 200 million dollars according to the experts and if everything goes according to plans: the Puerto Rican Carlos Correa, the gringo from Colorado Trevor Story and the phenomenon of Dodgers Corey Seager.
Three players of proven class, considered by many to be not only the best in their position but perhaps one of the best litters of shortstops in free agency in looooooong years. And the Yankees smell blood. The betting favorite. Trevor Story is perhaps the most balanced of the three: effective at bat and spectacular on defense, he has been considered an elite player in his position for years. Inexplicable that the Rockies don’t seem to want to renew him, but hey what makes sense in Colorado in recent years?
Extra fact: The Yankees-Colorado baseball romance already has a couple of famous casualties in recent years with LeMahieu and Ottavino. His friendship with LeMahieu may tip the balance.
Extra fact 2: a fan favorite at Yankee Stadium for his record as a serious and unscanned baseball player and, furthermore, no record with any rival Yankees team.

You can also read:  Mexico defeats Australia and continues with a firm step in the Premier 12 tournament

2.- Carlos Correa, controversy and explosiveness with a Puerto Rican flavor This is a loooong shot, but if they do it the Yankees would be surprising more than one in MLB.
Let’s remember that Correa and the Yankees have a long history with the controversy of the theft of signals and all the investigation of the commissioner. The Puerto Rican was one of the main names and fans of the Mules fired up just hearing the Astros named.
Can you imagine Correa at Yankee Stadium with the striped jacket? We see it difficult, but hey not impossible.

3.- Corey Seager, seriousness and effectiveness with affection from LA You can also read:  Tony Peña assures that the Dominican Republic has already overcome the defeat against Puerto Rico

The Seager case seems halfway between Story and Correa.
Without major scandals or controversy, Seager has a reputation as an effective player without drama. Not as “boring” as Story, but not as “explosive” as the Puerto Rican Correa.
Against? His Dodger past might not play much in his favor among old-guard fans and players.
Signature possibilities: 6/10 (Fielding)