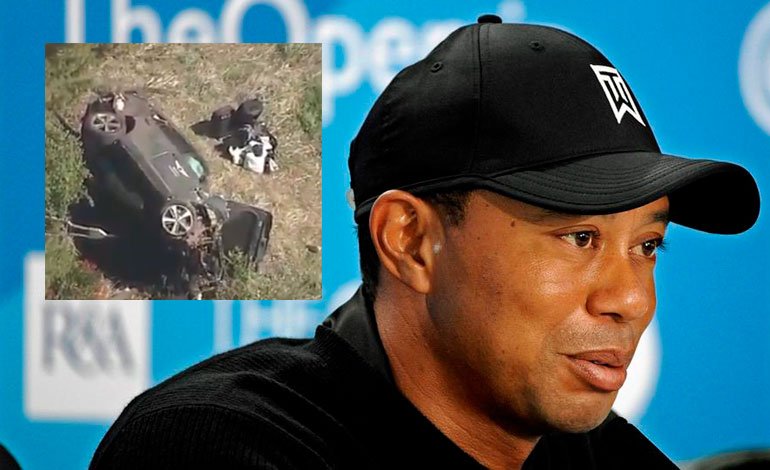 Tiger Woods, 45, paralyzed the sports world on Tuesday, February 23, after undergoing emergency surgery after starring in a car accident. Now his future in sports is a mystery.

According to People, the American golfer took an oath to his inner circle in the last hours. The Cypress, California native told his girlfriend Erica Herman, his agent Mark Steinberg and his caddy Joe LaCava, while visiting him at the Los Angeles medical center, that his career “can’t end like this.”

Woods insisted that if he can play again, he will. Although he is frustrated by what happened, a source told the aforementioned medium that “If there is any way that he can continue playing, he will.”

The American, who recently struggled to break the few records that resist him, knows what it means to resuscitate in sport, since in the past he has overcome nine back and knee operations, as well as major scandals for infidelities and other road accidents that put him in the eye of the hurricane.

“This is a great setback, and he knows it, but he has overcome obstacles in the past and believes that he can do it again,” remarked the person consulted. He added: “When you are healed enough, you will need other treatments, including physical therapy. But he is a fighter. If anyone can recover from this, it is him. “

Harbor-UCLA Medical Center Medical Director and Acting Executive Director Anish Mahajan explained that at the time Tiger “suffered significant orthopedic injuries to his right lower extremity that were treated during emergency surgery by orthopedic trauma specialists.” The tibia and fibula were stabilized by inserting a rod into the tibia, while a combination of screws and pins was used for additional injuries to the foot and ankle bones.

“He used a seat belt luckily. Otherwise, it could not have been achieved ”, concluded the source that shared the previously mentioned North American media.

You can also read:  Lewis Hamilton returns to social media

Woods, as explained by Sheriff Alex Villanueva during an interview with the television network CNN, does not remember what happened during the accident. In addition, he opened a new line on the subject of the 2021 Genesis GV80 truck: they will investigate the “black box” that these modern cars have to know precisely how fast you were driving when you lost control. “We hope that it is equipped with the black box and thus we will have information on speed, which may be a factor in this accident,” he clarified.

Officer Carlos González was the first police officer to approach the place where the golfer’s vehicle overturned on the border of Rolling Hills Estates and Ranchos Palos Verdes, in Los Angeles, California. According to the authorities’ report, the collision occurred at 7.12 on Tuesday. At 7.22 a neighbor made the call to 911 and only six minutes later, at 7.28, the uniformed man was already on the scene. Sheriff Villanueva also explained that investigators will not press charges against Tiger. “We do not contemplate any charges in this accident. This is still an accident. An accident is not a crime. They happen, unfortunately ”.

You can also read:  Ferrari throws in the towel and already thinks about 2015

For his part, Dr. Kenneth Jung, an orthopedic foot and ankle surgeon at the Kerlan-Jobe Institute, spoke to the Los Angeles Times and explained that as an exposed injury, “the soft tissue envelope, or the skin, is also very important. . If you don’t have skin covering the bone, it doesn’t really matter how the bone looks or heals. ” In this sense, he pointed out that one or two days after the surgical intervention, the tissue is checked to detect if there is necrosis or death. (GG) (Infobae)