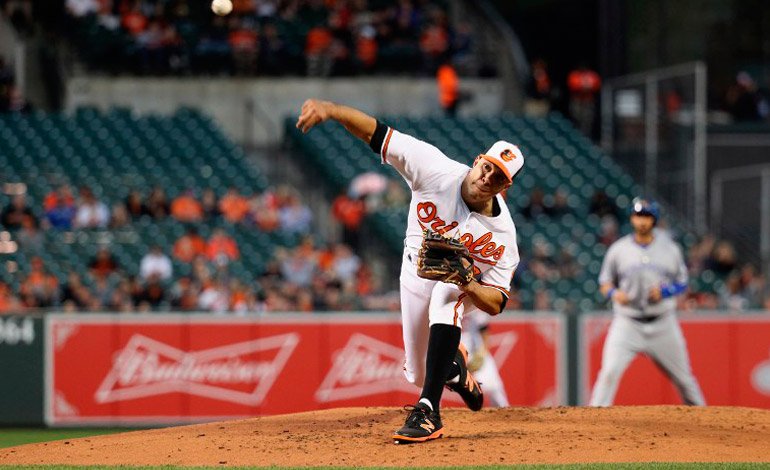 New winning streak for the Baltimore Orioles, Chicago White Sox and Texas Rangers in the American League that allowed them to remain at the top of the rankings in their respective divisions.
Catcher Caleb Joseph doubled in the 10th inning and drove in the run in the Baltimore Orioles’ 4-3 win over the Toronto Blue Jays in a matchup of top Eastern Division teams.
The Orioles got three runs in the first inning and had to wait until the tenth inning to claim the victory by scoring the fourth run.
From the mound, the victory was credited to closer Mychal Givens (1-0) in one inning, he allowed one hit, gave one walk and retired one by way of strikeout.
The loss fell to closer Joe Biagini (0-1) in two-thirds of the inning as he gave up two hits and one run.
For the Blue Jays, Dominican designated hitter Edwin Encarnación hit twice in five trips he made to the batter’s box and drove in two runs.
The Dominican, who has reached 11 RBIs so far this season, left his batting average at .313.
Starter Chris Sale became the first pitcher in the majors to reach four wins so far this season in the Major Leagues by allowing two hits in seven innings of the game that the White Sox beat the Angels 2-1 of the Angels.
Sale (4-0) gave up a pair of singles by center fielder Mike Trout and an unearned run. He left the game after hitting right-hander Kole Calhoun leading off the eighth.
Two years ago, Sale also won his first five decisions with the White Sox.
Closer David Robertson got four outs for his sixth save in as many attempts. He received the third hit from Trout, before completing a four-hit effort.
The White Sox improve to 10-5 as leaders of the Central Division after starting last season with a losing record of 10-14 and did not add their tenth win until May 26.
Shortstop Tyler Saladino homered in the first inning off starter Garrett Richards (0-3), who gave up two runs — one earned — and four hits in 6 1/3 innings.
Starter Cole Hamels worked just over six innings and Venezuelan second baseman Rougner Odor hit a four-corner shot in the victory of the Rangers, who beat the Houston Astros 2-1.
Hamels (3-0) pitched 6 2/3 innings, giving up five hits, a home run and a run for the win that kept the Rangers leading the West Division.
While Odor (2), who traveled to the batter’s box four times, hit a full lap with a runner in the trails.
The Astros’ loss went to starter Doug Fister (1-2) in six innings, he gave up five hits, a home run and two runs.
Dominican designated hitter David Ortiz drove in three runs and surpassed the historical record in the Boston Red Sox’s 7-3 victory over the Tampa Bay Rays.
Ortiz, who had not RBIed since April 15 against the Toronto Blue Jays, this time broke the RBI drought and drove in three.
With his three RBIs, he surpassed the Hall of Famer, Cuban Tony Pérez (1,652), by two RBIs, and is in 26th place on the all-time list in that section.
The next mark Ortiz could match is countryman Sammy Sosa, who had 1,677 career RBIs.
This time Ortiz hit two doubles in four trips to the batter’s box and with his three RBIs he reached 13 RBIs so far this season.
Outfielder Mookie Betts hit four corners with a running back down the road for the Red Sox.
The victory was credited to starter Rick Porcello (3-0) in seven innings, allowing six hits, a home run and three runs.
The loser was starter Chris Archer (0-4) in 4 1/3 innings, allowing eight hits, a home run and six runs.
The starter Jordan Zimmermann worked more than six innings, the Venezuelan designated hitter Víctor Martínez reached 1,000 RBIs for life and his compatriot the closer Francisco Rodríguez got his 390th save in his career, tying a historic mark and the Detroit Tigers won 3- 2 to the Kansas City Royals.
Starter Kendall Graveman pitched just over six innings and led the Oakland Athletics to a 5-2 victory over the New York Yankees.
Graveman (1-1) pitched 6 1/3 innings, allowing three hits, one home run, one run, three walks and eight strikeouts for his first win of the season.
Starter Taijuan Walker allowed only one run in six innings and led the Seattle Mariners to a 2-1 victory over the Cleveland Indians.
Walker (1-0) earned his first win of the season by working six full innings, allowing three hits, one run and striking out six opponents for the win.
In interleague play, starter Jimmy Nelson (3-1) pitched just over six innings and led the Milwaukee Brewers to a 10-5 win over the Minnesota Twins.EFE

You can also read:  Nadal, Djokovic, Federer and Murray advance to the round of 16 in Rome