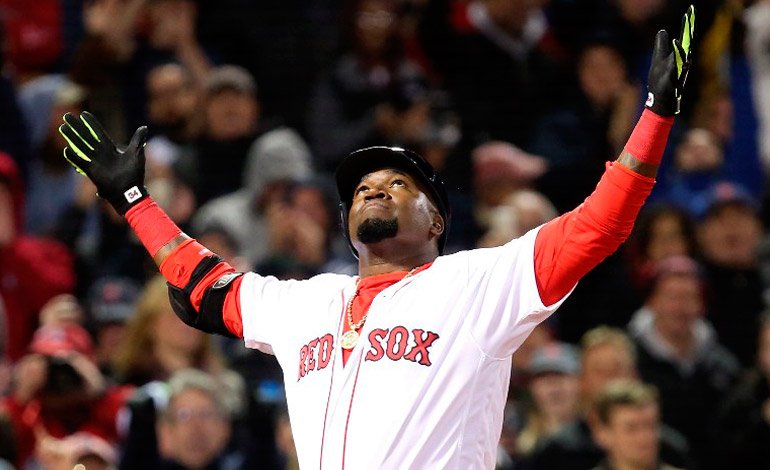 Dominican veteran slugger David Ortiz continues to be a protagonist within the major league circuit and with a four-corner hit he rose to 25th place on the all-time list to become the most outstanding Latin American player of the day.
Ortiz hit his 509th career home run and helped the Boston Red Sox beat the Chicago White Sox 5-2.
Ortiz (6)’s four-corner shot flew high into right field, carrying a runner into the driveways.
Ortiz is tied with Gary Sheffield for 25th on the all-time list in home runs, and it was the 451st hit for the Red Sox, just one behind Carl Yastrzemski, who has the best mark in the history of the Red Sox. Boston team.
For Ortiz it was the first home run he has connected since April 30 when he punished the New York Yankees.
With his three RBIs, he reaches 1,661 career RBIs and is only six behind his compatriot Sammy Sosa (1,667), who ranks 28th on the all-time list.
The veteran Dominican slugger, who leaves his batting average at .311, is close to the mark of Mel Ott, who added 511 home runs and ranks 24th on the all-time list.
For the White Sox, Cuban first baseman José Abreu (4) hit a full return and finished with two RBIs.
In a Latin American serpentine duel, Cuban starter José Fernández beat Dominican Rubby de la Rosa and the Miami Marlins beat the Arizona Diamondbacks 4-3.
Fernández (3-2) worked five innings, allowing six hits, a home run and three runs, walking two and striking out seven opponents to get the victory.
The Cuban, who had the support of four relievers, left his ERA at 4.28.
For the Diamondbacks, the Venezuelan ranger David Peralta (3) sent the ball to the fairway.
Peralta hit once in three trips to the batter’s box, drove in two runs and scored one, and has a .255 batting average.
Venezuelan second baseman José Altuve and Puerto Rican shortstop Carlos Correa also hit the ball to the fairway and drove in three runs apiece in the Houston Astros’ 16-4 rout of the Minnesota Twins.
For Altuve (8) it was the fifth home run with which the ninth Texan starts the attack so far this season.
The Venezuelan made five trips to the batter’s box, hit three times, finished with three RBIs and three runs scored.
Altuve, with his three RBIs on Wednesday night, has 17 RBIs on the season and put his batting average at .306.
Correa (4) rang the bat by having the same numbers as Altuve, hitting 3 of 5 with three RBIs and three runs scored, he reached 13 RBIs in the season and left his average at .276.
The offense of the Seattle Mariners, who defeated the Oakland Athletics 9-8, once again had the contribution of the Latin players led by the Dominicans, Ketel Marte, who went 2-6 with a run scored and an RBI, Robinson Canó 2-for-5 with a run scored and an RBI, and Nelson Cruz 3-for-4 with a run scored and two RBIs.
While the Venezuelan Franklin Gutiérrez was 4-1 with a run scored and the Cuban Leonys Martín was 4-1 with a run scored.
Venezuelan third baseman Eugenio Suarez hit one of the Cincinnati Reds’ three home runs in the second inning, driving in three runs and leading his team to a 7-4 win over the San Francisco Giants.
Venezuelan shortstop Asdrúbal Cabrera and Puerto Rican catcher René Rivera hit two of the four home runs for the New York Mets, who beat the Atlanta Braves 8-0.
Cabrera and Rivera hit two of the Mets’ four home runs to lead the team in timely and productive hitting.
Rivera, who played catcher in place of starter Kevin Plawecki, dribbled the ball in the second inning with a runner on, while Cabrera did the same in the third.
The contribution of Latino batting was decisive in the Mets’ offense with Cabrera going 1-4, with a home run, two RBIs and one run scored; his compatriot Wilmer Flores was 2-3, with an RBI and a run scored.
While Rivera went 1-4, with a home run, two RBIs and a run scored. Cuban Yoenis Céspedes had 4-2, with a run scored.
Outfielder Mike Trout provided a timely bat that allowed the Los Angeles Angels to come from behind and earn a 7-3 victory over the Milwaukee Brewers in interleague play.
Latin batting was present in the Angels’ offense with Cuban Yunel Escobar who went 2-4 with a run scored. Venezuelan Rafael Ortega 5-1 with a run scored and produced, and Puerto Rican Geovany Soto 3-0 with a run scored.
Mexican reliever Fernando Salas (2-1) overcame an episode without allowing annotation and achieved the victory.
The Brewers took a 3-2 lead in the sixth, when third baseman Hernán Pérez ran from third base on a wild pitch by reliever Cam Bedrosian.
Despite the loss, the Brewers attack had the support of Dominican Jonathan Villar who went 1-for-4 with a run scored and Pérez had two hits in four trips to the batter’s box to get a pair of runs scored and an RBI. .EFE