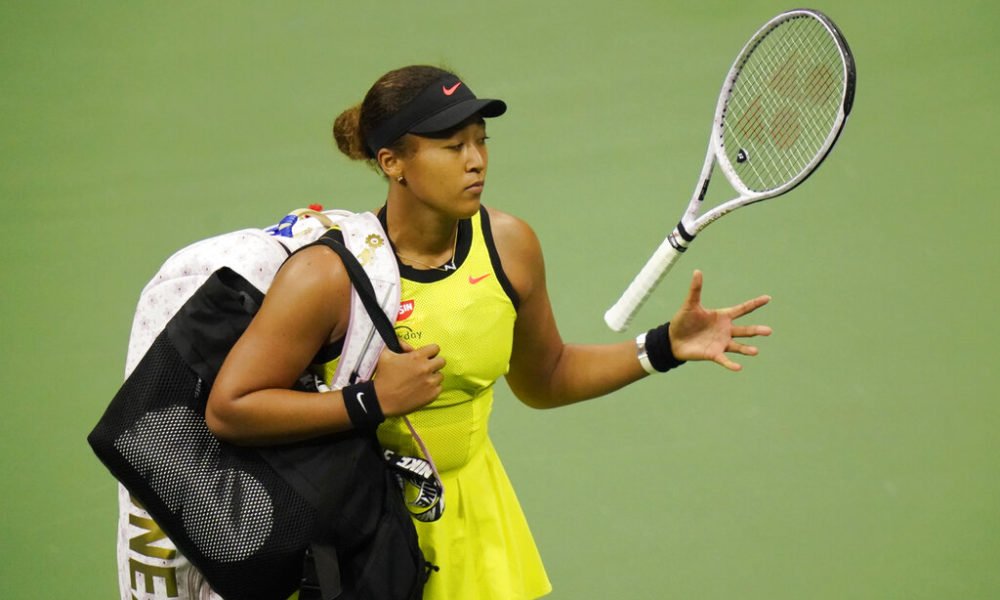 Japanese tennis player Naomi Osaka, reigning champion of the United States Open, and Greek Stefanos Tsitsipas, third seed male, were fired on Friday from the New York Grand Slam by two young phenomena: the Canadian Leylah Fernandez and the Spanish Carlos Alcaraz.
The ordeal of these two 18-year-old pearls shook a tournament, the last Grand Slam of the season, in which their favorites advanced so far without too many surprises.
Osaka, a four-time Grand Slams champion, said goodbye to her fetish tournament with a deranged performance in which she threw her racket several times out of sheer frustration.
Fernandez rallied the Japanese star one set to win 5-7, 7-6 (7/2) and 6-4 in two hours and three minutes of play.
This unexpected elimination closes a complex season for Osaka, who started by winning the Australian Open, his fourth Grand Slam trophy.
The campaign, however, was marked by his resignations at Roland Garros and Wimbledon after revealing that he had suffered from depression and anxiety in his career.
Fernandez only has one WTA title on her record, that of Monterrey in 2021, and this is her first appearance in a round of 16 of a Grand Slam, but the young woman exhibited enormous confidence with both the racket and the microphone.
“From the beginning, just before the game, I knew I was capable of winning,” said the Canadian, thanking Arthur Ashe for the majority support of the fans on the main court.

Just several hours before Fernandez’s success, Spaniard Carlos Alcaraz became the youngest player to reach the fourth round of the Open since Michael Chang in 1989 and also of any Grand Slam since Andrei Medvedev in 1992.
Alcaraz, to whom they have hung the label of ‘Nuevo Nadal’, achieved this success in a big way, knocking down Stefanos Tsitsipas, number three in the world ranking, in a memorable five-set battle that was defined in a dramatic last ‘tiebreak’.
Also encouraged by the New York public, Alcaraz broke into the tennis elite with a victory 6-3, 4-6, 7-6 (7/2), 0-6 and 7-6 (7/5) in four hours and six minutes of play.
“This victory means a lot to me,” the Spaniard congratulated himself. «It is the best game and victory of my career. For me, beating Stefanos Tsitsipas is a dream ».
Number 55 in the ATP ranking, the Spaniard had already been warning of his strength this year reaching the third round of Roland Garros and now he will face German Peter Gojowczyk, world number 141, in the second round of New York.
Tsitsipas, still unbroken in the third round in New York, acknowledged the superiority of his precocious rival.
“He can be a contender to win Grand Slams, he has the game for it,” said the runner-up at last Roland Garros.

The Russian Daniil Medvedev, second seed, was not surprised this Friday and achieved a resounding victory against the Spanish Pablo Andújar.
The Russian, finalist of the New York Grand Slam in 2019, won 6-0, 6-4 and 6-3 in one hour and 56 minutes of play.
Chasing his first Grand Slam title after two lost finals, Medvedev will meet Daniel Evans, the 24th seed and the first Briton to reach the New York Round of 16 since Andy Murray and Kyle Edmund in 2016.
In his turn, the Argentine Diego Schwartzman, eleventh seed, beat the Slovak Alex Molcan, number 138 in the ATP ranking, by 6-4, 6-3 and 6-3 in two hours and four minutes of play.
In the round of 16, Schwartzman will face the Dutch Botic van de Zandschulp, who avoided an entirely Argentine tie by beating Facundo Bagnis 3-6, 6-0, 6-2 and 6-2 in the third round.

You can also read:  Tsitsipas makes history and reaches the final in Toronto

In a duel of former women’s tennis numbers one, the Spanish-Venezuelan Garbiñe Muguruza defeated the Belarusian Victoria Azarenka 6-4, 3-6 and 6-2 and equaled her best result in New York.
Muguruza, winner of two Grand Slam, aspires to continue advancing in the only major tournament in which she has not reached the final while Azarenka, three times runner-up in New York, said goodbye at it. (AFP)