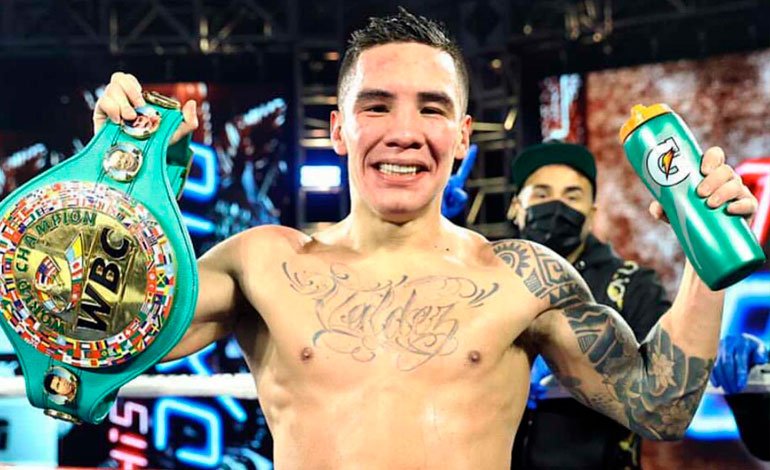 Valdez’s aggressiveness was the key that opened the way to the title by not allowing his compatriot to respond to the punishment he inflicted on him throughout the fight.

Valdez (29-0, 23 KOs), former World Boxing Organization (WBO) featherweight champion and two-time Olympian, starred in the big surprise of the evening by beating Berchelt (38-2, 34 KOs), who was arriving as the great favorite to the fight held at the MGM Grand in Las Vegas.

The new champion landed a devastating left hook late in the 10th round that left his compatriot on the canvas in what may well be the knockout of the year.

Valdez, 30, claimed the WBC title from Berchelt and scored the biggest victory of his professional career.

“There is nothing better in life than proving people wrong,” Valdez declared. I have a list of people who doubted me. My idols doubted me. Boxing analysts doubted me. They said Berchelt was going to knock me out. I have a message for everyone: Don’t let anyone tell you what you can and cannot do, ”he stressed.

You can also read:  Andy Ruiz recovers from crash and defeats Chris Arreola

Berchelt, whose only other professional loss came by TKO in 2014, lay face down on the mat for several minutes, but was finally able to sit up and get up with help.

He was later taken to a hospital and a Top Rank official reported that 29-year-old Berchelt underwent a CT scan and was released.

The impressive hook to the counter could have overshadowed the fact that the much smaller Valdez dominated the fight. He scored knockdowns in the fourth and 10th rounds and was way ahead on the scorecards of all three judges at the time of the final.

The statistics of the fight also left no doubt of the advantage of Valdez, who threw 534 punches, of which 149 (28%) reached the body and face of Berchelt, who reached out 447 times his hands to hit 99 (27%) to the new champion.

“Oscar Valdez proved that he is one of the great Mexican champions,” said Top Rank’s Bob Arum. “An absolute masterpiece in the ring tonight.”

The left hook and the direct hook were Valdez’s preferred offense, as he was deft against aggression from Berchelt, who from the start of the fight never felt comfortable.

Especially after seeing how López worked perfectly with the direct to open his guard and then surprised him with the left hook overhead.

Berchelt seemed to want to fight back with his trademark power, but he was never comfortable with Valdez’s skill and speed.

You can also read:  'Chocolatito' González is "waiting" for a fight with the Mexican Cuadras

In the third round, Berchelt was more or less chasing Valdez around the ring and ended up with the former champion running after him and diving forward with all kinds of punches.

Although it was not the strategy that Berchelt came out with, it did have its moments. He scored with power shots to Valdez’s body, and it looked like he might be turning the tide in the seventh as Valdez repeatedly tied him up in clinches to slow the pace.

But in the eighth, Valdez returned to his efficient direct work and caused Berchelt to fail against the ropes.

Round 10 was brilliant for Valdez as he opened with combinations and the referee looked closely at Berchelt. The counter left hook proved to be a fitting ending.

The victory, which is Valdez’s third straight appearance at 130 pounds, could set up a junior lightweight title fight between Valdez and Top Rank’s 23-year-old Shakur Stevenson (15-0, 8 KOs). EFE. (HN).