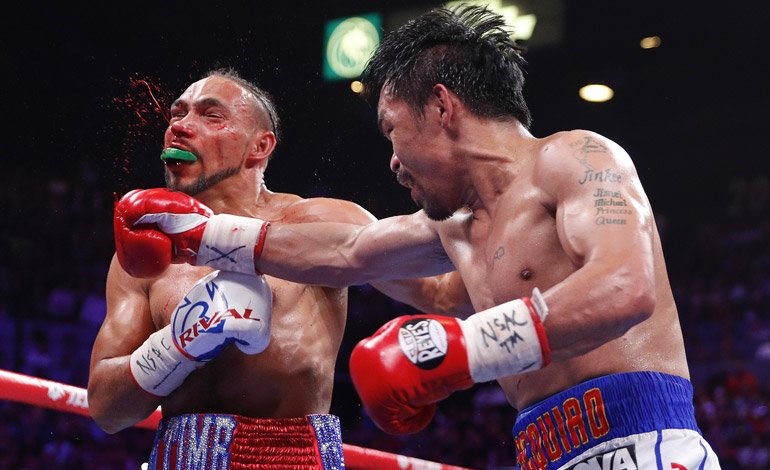 Manny Pacquiao dropped Keith Thurman in the first round and persevered in a thrilling bout that ended with a split decision. It is the third victory in a row in his return to the ring after turning 40.

Pacquiao (62-7-2) dropped his hitherto undefeated opponent with a combination late in the first round, and the Pac-Man dominated the opening rounds with a combination of agility and power that was reminiscent of the unbelievable best moment of the single. eight-division champion in boxing history.

Thruman (29-1) showed striking tenacity to seek the comeback in the middle rounds, repeatedly testing Pacquiao’s chin with hard blows. Neither managed to bring down their rival again, but they pressed relentlessly before an audience that sold out the seats at the MGM Gran Garden, and that chanted the name of the Philippine senator several times from the moment he stepped into the ring.

You can also read:  Salazar won a gold medal for Honduras

At stake were the versions that each rival had of the welterweight title by the World Boxing Association (WBA).

Pacquiao appeared to be on the wane just two years ago when he lost a decision to Jeff Horn. But as his political career prospered, he returned to the ring a year ago and delivered two solid wins in a row against Lucas Matthysse and Adrien Broner.

You can also read:  How to burn calories with boxing exercises

Defeating Thurman was another big step toward rejoining the welterweight elite, and Pacquiao came out from the first minute determined to show he was up to the task.

After pushing until the final bell, the two fighters embraced.

“I knew it was close,” Thurman said. “He had the inertia because he knocked me down in the first round (…). I wish I could have offered a little more to be on an equal footing. Tonight my conditioning, my performance was a little below Manny Pacquiao. Tonight was a blessing and a lesson ”.

Thurman called for a rematch, and the audience gave their sound approval.

In the previous bout, Cuban welterweight Yordenis Ugás defeated hitherto undefeated Omar Figueroa Jr. by decision in a three-card win at 119-107. Caleb Plant also defended his IBF super middleweight title against Mike Lee, who came undefeated but suffered a resounding loss after being knocked out in the third round. AP

You can also read:  Kahwagi returned to boxing with triumph