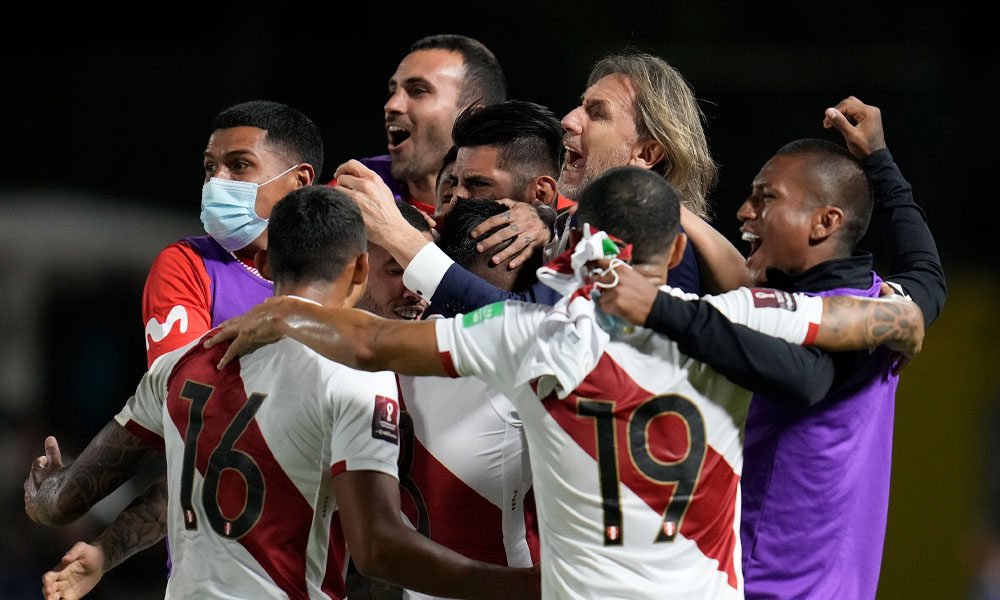 Peru, with goals from Gianluca Lapadula and Christian Cuevas, and a penalty blocked by goalkeeper Pedro Gallese, beat Venezuela 2-1 and continues to fuel their hope of entering the Qatar-2022 World Cup.

Cuevas, by scoring with a free kick that deflected into the barrier in the 65th minute, decided in favor of the Argentine Ricardo Gareca’s team the match for the fourteenth date of the South American qualifier, at the Olympic Stadium of the UCV, in Caracas.

Lapadula, in 18, had previously scored for the visitors and Darwin Machís had done so for the locals in 52.

Gallese covered a penalty taken by Machís in 68, certifying the triumph of the white and red team, which last Thursday came back to life by crushing Bolivia 3-0.

Peru remains with 17 points and provisionally occupies fourth place behind Brazil, with 34; Argentina, with 28; and Ecuador, with 20; followed by Chile, Colombia and Uruguay, all with 16, awaiting the results of the Argentina-Brazil, Colombia-Paraguay and Chile-Ecuador commitments. Venezuela is bottom with 7 units.

You can also read:  Germany struggles to qualify for the round of 16

The clash ended 24 years without victories for the Peruvians in their visits to Venezuelan soil.

– Lapadula and his arsenal –

Lapadula, with his wide repertoire of weapons, gave Peru an advantage in a play that began and ended with Cueva and André Carrillo as partners.

He pivoted at the gates of the area, giving the ball to Cueva, who opened the game towards the band with Carrillo, whose center found the forward of Benevento of the Italian Serie B back, who had attacked the empty space and finished at pleasure to sign his second score in this World Cup tie.

His target ruined the initial ambition of Venezuela, which started with enthusiasm with an active Luis ‘Cariaco’ González in the creation zone.

You can also read:  Chelsea dances to Juventus

Back in the Venezuelan national team (his last appearances prior to this double World Cup date had been in November 2008), González tried to do damage with his mobility. A deflected shot from him, a venomous cross from Ronald Hernandez and a shot from Jefferson Savarino were controlled by Gallese in waves from the homeowners in the first 10 minutes.

Peru, with the return of Yoshimar Yotún as the only novelty after serving suspension, began to find holes to play their football.

The turning point: a shot by Carrillo in the area around the quarter of an hour, which was saved by a miracle goalkeeper Wuilker Faríñez.

Shortly after, the Cuevas-Carrillo-Lapadula combination arrived for the first goal.

Peru, which seemed to be putting the game under control, saw Venezuela draw at half-time.

You can also read:  Laporta would have decided to fire Koeman

Machís, after an impeccable center from right-back Ronald Hernández, returned parity on the scoreboard.

The joy of the Vinotinto did not last long, anyway. Cueva’s free kick, deflected by attacker Fernando Aristeguieta at the barrier, dislodging Faríñez. The visit had a bit of luck to assert its superiority.

Cueva, elated, ran to hug Gareca, the man who put Peru in Russia-2018, after 36 years of absence from a World Cup.

In a match that went into a maddened round trip, the referee whistled a penalty in favor of Venezuela by the hand of Miguel Trauco. Machís charged and blocked Gallese by throwing himself to the right.

Peru will face on January 27 and February 1, on the next double date, Colombia as a visitor and Ecuador as a home. Venezuela will collide with Bolivia and Uruguay. AFP (HN)