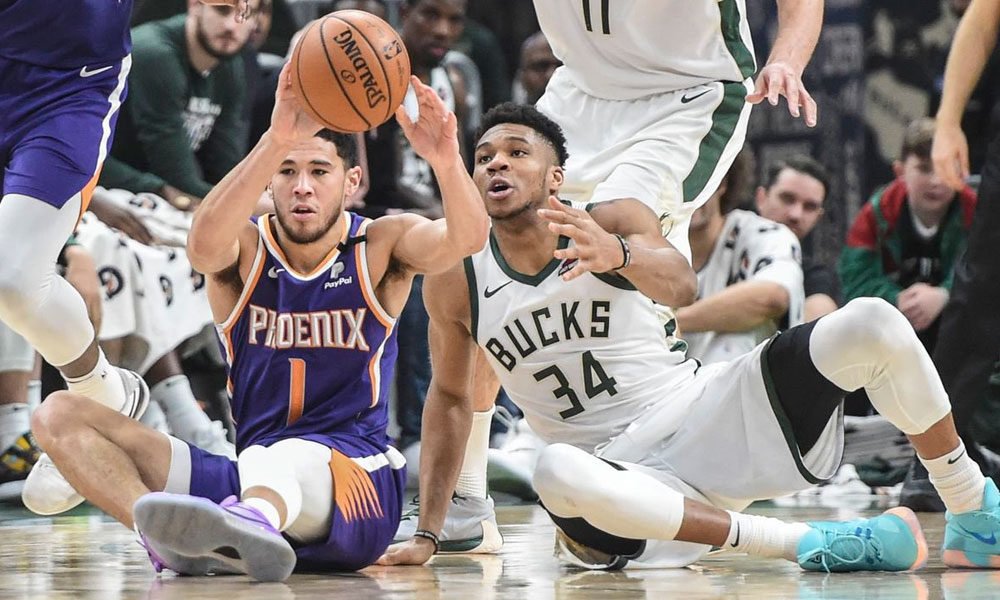 Survivors of the plague of injuries of these playoffs, the Phoenix Suns and the Milwaukee Bucks will star from Tuesday in the unexpected NBA Finals whose resolution may depend on the physical condition of Giannis Antetokounmpo.

The two-time MVP (Most Valuable Player) winner suffered a hyperextension of his left knee in the last tie against the Atlanta Hawks and his participation in the Finals is up in the air.

The Greek power forward was the latest victim of a recharged postseason in which big favorites like LeBron James’ Lakers and Kevin Durant’s Nets succumbed to the Suns and Bucks, two franchises outside the NBA nobility.

None of the players who will take to the Phoenix Suns Arena on Tuesday have won the championship and only one has competed in a Finals, Jae Crowder (Suns), who did it last year with the Miami Heat.

The Bucks claimed their only title half a century ago while the Suns have never reached the ring since its founding in 1968.

Hand in hand with Devin Booker and Chris Paul, who will fight for the title for the first time at age 36, Phoenix will have a third chance after their losses in the 1976 and 1993 Finals.

You can also read:  This is how Luka Doncic celebrated his millionaire renewal with Dallas Mavericks

That last year, Charles Barkley commanded some powerful Suns who also had Kevin Johnson and Dan Majerle and who only knelt before the legendary Chicago Bulls of Michael Jordan.

The defeat left Barkley on the list of the greatest players in history who have never conquered a ring, which Chris Paul will now try to abandon.

– The great opportunity of CP3 –

Chosen for the All-Star Game in 11 of his 16 seasons in the league, Paul ranks fifth all-time (best among active players) in both assists and steals.

After numerous frustrations in the playoffs and physical problems, Paul’s career in the NBA was downhill until he decided to bet this year to join the Phoenix Suns, a franchise that had not made the postseason for a decade.

“I’ve wanted to be a part of this my entire career,” Paul said, Finals ticket in hand.

The seasoned CP3’s second youth, who averaged 16.4 points and 8.9 assists this season, unleashed the potential of the Suns’ young figures.

Guard Devin Booker added to his extraordinary scoring talent (25.6 points per game) defensive intensity and group leadership on the court.

You can also read:  NBA players with the highest income in 2021

Bahamas center DeAndre Ayton (14.4 points and 10.5 rebounds), challenged number one in the Draft of Luka Doncic and Trae Young, has matured in these playoffs by resisting battles against superstars like Anthony Davis (Lakers) and Nikola Jokic ( Nuggets).

After finishing second in the West in the regular season, the Suns have been the strongest team in the playoffs, in which they were able to exploit the absence of figures from their rivals.

In the first round they eliminated the Los Angeles Lakers (4-2), current champions, diminished by Davis’ physical problems, and later the Denver Nuggets (4-0) without Jamal Murray and the Los Angeles Clippers (4-2) without Kawhi Leonard in recent games.

The Milwaukee Bucks, meanwhile, return to a Finals 47 years after the defeat they suffered to Kareem Abdul-Jabbar and Oscar Robertson in 1974.

This mythical duo had achieved the only franchise title three years earlier against the Baltimore Bullets.

Under the command of another superstar, the Greek Giannis Antetokounmpo, the Bucks finished third in the East in the regular season and were defeated in the playoffs by the Miami Heat (4-0), Brooklyn Nets (4-3) and Atlanta Hawks ( 4-2).

You can also read:  Cavaliers and Clippers surprise losses

Kevin Durant’s game against the Nets, which was decided in the overtime of a seventh game of heart attack, was the definitive turning point for a team that had suffered painful setbacks in the postseason under the hands of Antetokounmpo and his lieutenant Khris Middleton.

The Greek power forward (28.1 points, 11.0 rebounds and 5.9 assists this course) was the Bucks’ great driver until he was injured in Game 4 of the series against the Hawks.

The responsibility then fell on Middleton (23.7 points and 6.5 assists on average against Atlanta), a cold-blooded guard with fearsome scoring streaks, and Jrue Holiday (22 and 10), the piece that the Bucks were missing. in defence.

“Getting to the final is incredible. It’s a feeling I’ve never felt before, ”31-year-old Holiday acknowledged on Saturday. “As children, we all wanted to be a part of this.”

Whichever winner is, this matchup will be a renewal for the NBA after a decade in which there has always been a finalist, or both, led by LeBron James or Stephen Curry. AFP (HN)