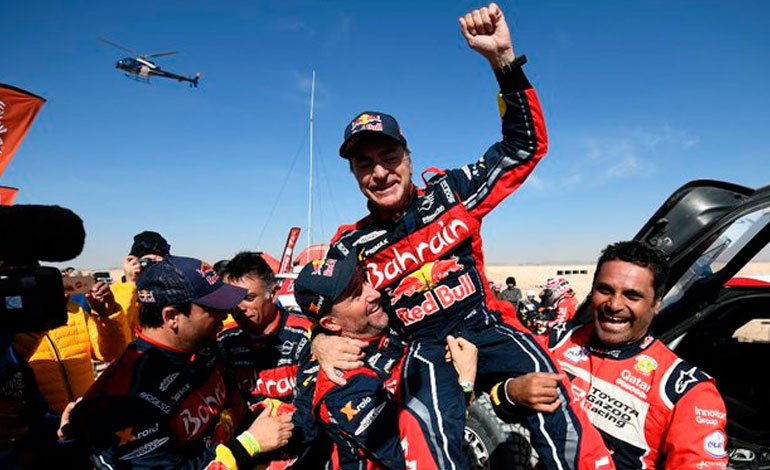 Veteran Spanish driver Carlos Sainz, winner of the last Dakar in the car category and two-time world rally champion, was awarded the Princess of Asturias Award for Sports after more than three decades in the motorsport elite.

“Sainz has been chosen the best rally driver of all time,” said the jury in their minutes, highlighting that “he has won the World Cup twice and has won the Dakar three times, being the oldest athlete to do so, to the age of 57 years ».

The jury also valued the “great spirit of improvement” of the pilot, “combined with effort, discipline and solidarity, which has also been reflected in his constant support of young pilots throughout their long and successful sporting life.”

Carlos Sainz from Madrid is now 58 years old and is the father of Carlos Sainz ‘junior’, a Formula 1 driver recently signed by the Ferrari team for the 2021 and 2022 seasons.

His extensive record includes the 1990 and 1992 world rallies, when he achieved feats such as “becoming the first non-Nordic driver to win the rallies in Sweden or Finland,” the jury recalled.

In 2005 he retired from the World Championship after taking part in the Rally in Turkey, after which he began a second and surprising life in the Dakar Rally.

In 2010 he obtained his first triumph in the car category in the legendary rally, already held far from African lands, between Argentina and Chile.

In 2018, at the age of 55, he repeated his triumph, beating nine-time world rally champion Sébastien Loeb and thirteen-time Dakar winner (six by car and seven by motorcycle) Stéphane Peterhansel.

In January of this year, the Madrid rider added his third Dakar, contested for the first time in Saudi Arabia.

You can also read:  Kubica to drive the Renault RS17 in the Hungarian test

“I do not want to miss the opportunity to thank all the fans who have been supporting me for so many years and I also make them part of this award,” he added.

– A candidacy with powerful support –
Sainz succeeds the American skier Lindsey Vonn, who was awarded last year, in the Sports category.

On this occasion, 17 candidates from 10 countries were competing in the category, the Foundation jury specified.

Sainz’s candidacy was proposed by journalist and writer Luis María Anson, 1991 Prince of Asturias Award for Communication and Humanities.

You can also read:  Hamilton: "I am delighted to have lost only ten points"

With the Sports Award, five of the eight 2020 Princess of Asturias Awards have already been awarded, considered the most prestigious in the Ibero-American world.

In previous days, the award of Concord, awarded to Spanish health personnel for their fight against the coronavirus, the one for the Arts, for the composers of soundtracks for film classics Ennio Morricone and John Williams, and the one for Communication and Humanities were announced. for the Guadalajara Book Fair (Mexico) and the Hay Festival de Literature (Wales).

The awards are named after the heir to the throne of Spain, Princess Leonor, and are presented by the kings in October in a solemn ceremony in Oviedo, capital of Asturias. AFP (HN)