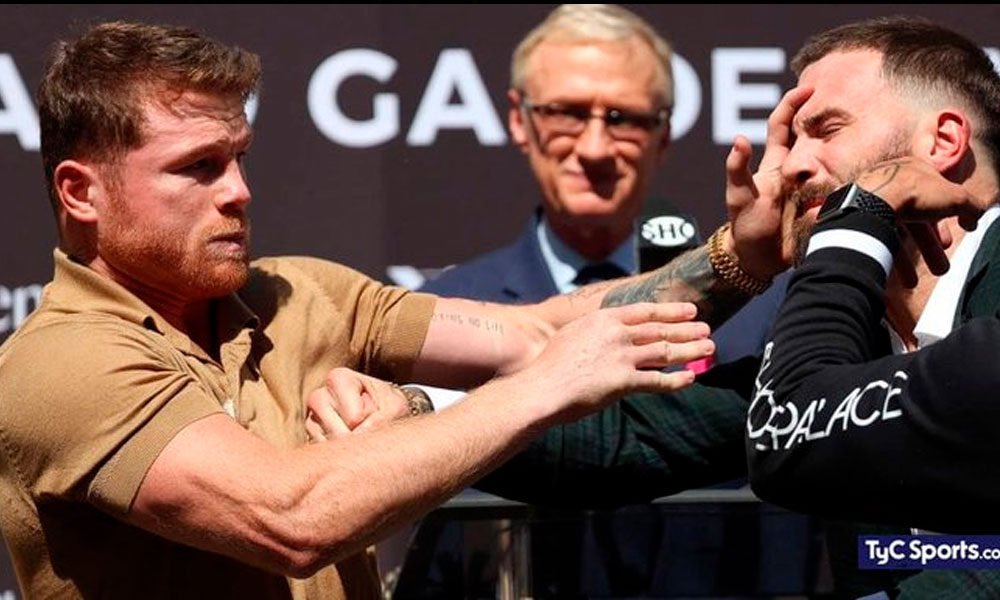 The Mexican Saúl ‘Canelo’ Álvarez and his rival Caleb Plant came to blows this Tuesday, in the middle of a press conference to promote the fight that both will play in November for the world super middleweight crown.

The undefeated American Plant was left with a cut under his right eye after the fierce exchange at the hotel where the conference was held in Beverly Hills.

For his part, Mexican star Alvarez, widely regarded as the best pound-for-pound fighter in boxing, sparked the tumult after coming face-to-face with Plant.

With both men appearing to exchange expletives, Alvarez shoved Plant hard in the chest, sending the 29-year-old from Tennessee staggering across the stage.

You can also read:  Mexican Misael Rodríguez makes his debut with victory in the middle

Plant responded with a savage left hook, which Alvarez comfortably dodged before landing two counterattacks, causing a cut under his opponent’s right eye.

Security and members of the entourage of both boxers took the stage to interrupt the fight.

Plant again addressed Álvarez with a tirade laden with expletives before accusing the Mexican of being a “drug cheater.”

Alvarez tested positive for a banned steroid in 2018, forcing his fight with Gennady Golovkin to be postponed at that time.

You can also read:  Puerto Rican boxers seek a pass to the Toronto Pan American Games

The Mexican, with a 56-1 record with two draws and 38 knockouts, is seeking his eighth consecutive victory. He beat Briton Callum Smith by unanimous decision in December 2020 for the WBA and WBC crowns and added the WBO title three months ago by beating Briton Billy Joe Saunders.

You can also read:  Holyfield wants to fight Tyson