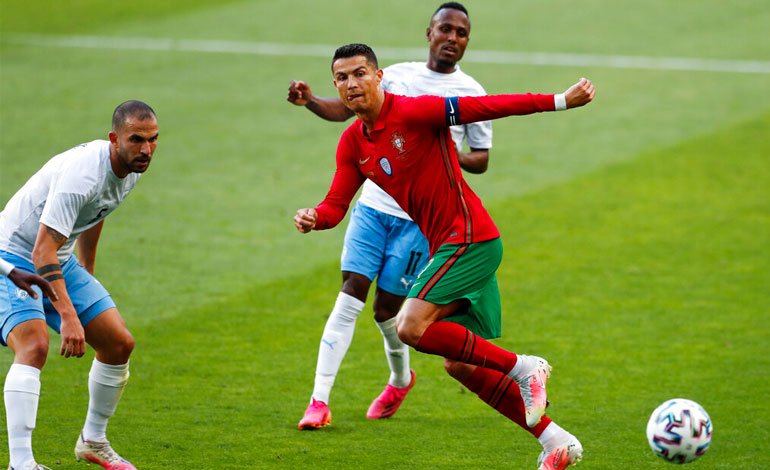 The Portugal team beat Israel’s modest team 4-0, in a match in which the Portuguese did not convince, they offered many doubts in all their lines and Joao Félix did not have minutes.

One of the protagonists of the match was the Portuguese from Manchester United Bruno Fernandes, who scored the first and the last goal, while Cristiano scored the second for Portugal.

In the first part, it was difficult for Portugal to find the fluidity of the game and despite arriving clearly, they did not manage to open the can until the last minutes.

The Betic William Carvalho was not very precise and Ruben Neves did not take control of the game either, while Cristiano wasted some clear, like the one he had in the 35th minute, when he finished off at will inside the area after a pass from Bruno Fernandes and the ball crashed into a defender.

In the 41st minute, after a run down the right by the City Cancelo winger, the first goal came. The play ended with the back pass so that Bruno Fernandes crossed the ball without the goalkeeper Marciano being able to do anything.

And two minutes later, against which Bernardo Silva led, he served for Cristiano and he beat the Israeli goalkeeper inside the area so that the first half ended 2-0.

The bet of Fernando Santos, who initially opted for the Granada goalkeeper Rui Silva and left Joao Félix on the bench, drew attention.

In the second half, Diogo Jota stayed in the locker room and forward André Silva entered, the second top scorer in the Bundesliga this season at the service of Eintracht Frankfurt.

In the 57th and 60th minutes, first Bernardo Silva and then Cristiano both had clear chances, but they didn’t know how to finish well.

You can also read:  A 'Classic' to reactivate a business of 119 million

However, despite the additions of Pote, Guedes and Renato Sanches, Portugal was still too flat in the second half.

Israel was even able to reduce differences with an excellent move down the right wing that PSV striker Zahavi finished off against Rui Silva and narrowly missed out.

The 3-0 put in the 84th minute the side Joao Cancelo, who in a personal play on the right undid with a cut from his defender and crossed to the back of the net with a changed leg.

And the sentence was signed with a trademark goal by Bruno Fernandes, who starred in a superb shot from outside the area that entered through the Israeli squad.

A meeting without too many positive readings for Portugal with six days to go before its first official match in the European Championship, where it will face Hungary.

You can also read:  The Netherlands qualified for the round of 16 of the European Championship by defeating Austria

– Incidents: Friendly match played at the José Alvalade Stadium in Lisbon without an audience due to the restrictions of the coronavirus pandemic, which serves as preparation for the European Championship for the Portuguese team. EFE (hn).