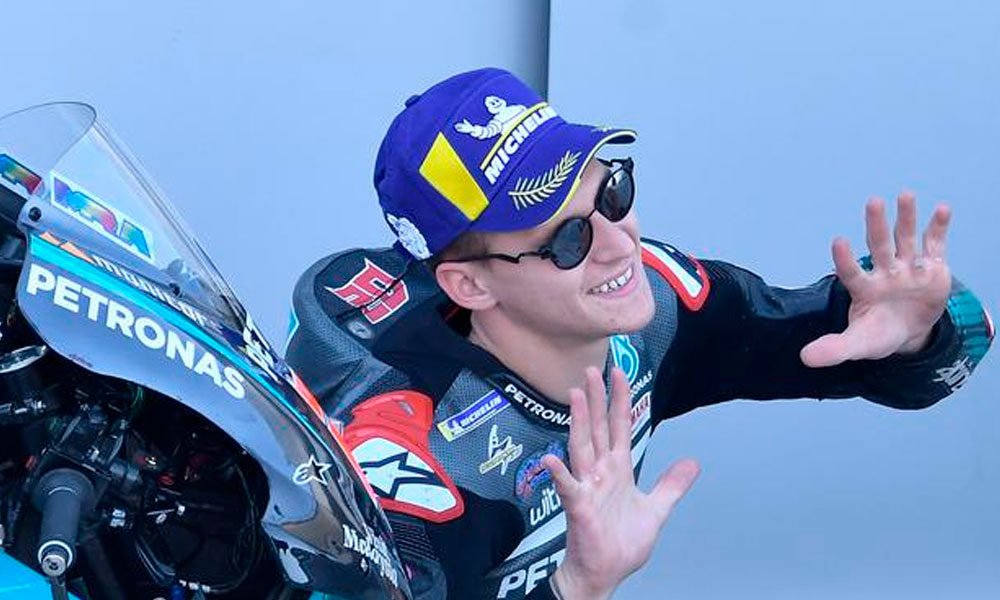 Fabio Quartararo arrives at the Aragon Grand Prix ready to score a 6th victory this season and get a little closer to the world title, but he faces a difficult circuit, where the Spanish idol Marc Márquez can continue his ascent.

The young French Yamaha rider, who faces this 13th round of the season with 65 points ahead of the second-placed in the World Championship, the current champion Joan Mir (Suzuki), is aware of the difficulty and is cautious.

“Aragon is, without a doubt, the worst circuit of the season, not for Yamaha but for me. Sometimes I have been fast here, I even had pole last year, but I have never been a regular. It would be good to change that and I want to learn to improve, “he said.

In the absence of a victory, a good result would allow him to close to the title with only six races left to finish the season. After Mir, the French Johann Zarco (Ducati-Pramac) and the Italian Francesco Bagnaia (Ducati) are, respectively, 69 and 70 points behind the French.

You can also read:  Lewis Hamilton wins his second race of three in Portugal this season 2021

Neither Zarco nor Bagnaia have ever won in MotoGP and are looking forward to success, but their powerful Ducati are not comfortable on the Spanish circuit and the last victory for the Borgo Panigale brand dates back to 2010.

The Suzuki of Mir and his partner and compatriot Álex Rins move better in Aragon as demonstrated by the victory last year of the latter. After a difficult start to the season, last season’s world champion machines seem to have found their rhythm even though they have yet to win a victory this year.

Marc Márquez, the six-time world champion, considers himself at home here and his five victories testify to this.

But the Spanish champion is on his own way back to the top after the accident that took him off the track last season. His right arm continues to make him suffer and he holds the record for the most falls since the start of the season.

You can also read:  Rosberg: "Mercedes will be a team to beat, but Alonso can qualify for podiums"

Currently 12th in the championship 147 points behind Quartararo, his hopes of a 7th title have been dashed, but he must prove that he is still at the highest level.

Aragon is one of the rare circuits where you race in a counterclockwise direction, which helps to alleviate Márquez’s right arm. It was precisely on a circuit of the same type, the German Sachsenring, where he achieved his only victory of the season in June.

“Left curves put less pressure on the right arm,” said the Honda rider on Thursday, specifying that the first laps of the race, when the tires are fresh and offer more grip, are the most difficult because they are “the most physical ».

The public, some 20,000 people, will also be watching another Spaniard, Maverick Viñales, who will debut with Aprilia.

Having left Yamaha after dark accusations of sabotage, the Figueres rider wants to show that he can aspire to a 10th MotoGP victory.

You can also read:  FIA validates the registration of the Marussia Manor team

It comes at a time when the Aprilias, long relegated to the middle of the grid, return to the fore as evidenced by the third place of their new teammate and compatriot Aleix Espargaró in the last British GP, the first podium in MotoGP for the Italian brand.

Present in MotoGP since 2015 with the Gresini team, Noale’s firm is preparing to be a true factory team next year and seems to have found the secrets of speed.

“The remaining six races will serve above all to prepare for the next season and our priority is to learn,” said Viñales this Thursday.

In the other categories, Australian Remy Gardner will try to increase his advantage over Spaniard Raúl Fernández in Moto2.

In Moto3, 17-year-old phenom Pedro Acosta, already a five-time winner in his first season in the category, will try to increase his championship lead after his poor performance (11th) in the last race, at Silverstone. AFP (HN)