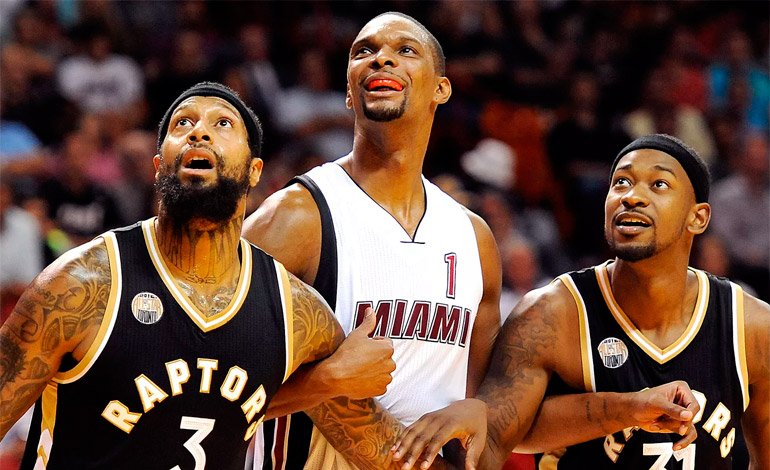 The combination of forward DeMarre Carroll and Lithuanian center Jonas Valanciunas was decisive in the individual and team game of the Toronto Raptors, who beat the Miami Heat 96-92 in overtime in the second game of the semifinal series of the Eastern Conference.
The victory left the best-of-seven tie tied (1-1) and the third game will be played next Saturday in Miami, where it will also be the fourth.
Carroll led the Raptors’ attack by scoring 21 points, which made him a winning surprise factor, while Valanciunas was once again the best man for the Toronto team in the inside game, contributing a double-double of 15 points and 12 rebounds.
Valanciunas was key in the reaction that the Raptors had in the fourth quarter when they again forced the second consecutive extension so far in the series, in which he also stood out.
The Lithuanian center was unstoppable in the last 17 minutes of the game, scoring 11 points and grabbing seven rebounds, which prevented the Raptors from suffering two consecutive losses for the first time so far in the final phase competition.
The Raptors still didn’t have a good shooting percentage, shooting just 42 percent compared to the Heat’s 49, but they eventually found a way to win the game.
Raptors star guard DeMar DeRozan scored 20 points, point guard Kyle Lowry reached 18 and reserve forward Terrence Ross added 10 points, which left him last on the list of the five players on the Canadian team who had numbers of two digits.
Slovenian point guard Goran Dragic continued to lead the Heat’s attack by scoring 20 points and topping a list of five players — all starters — who had double-digit numbers.
Shooting guard Dwyane Wade, who suffered from the lack of execution they had in the attack during overtime, and forward Joe Johnson had 17 points each for the Heat, who return to Miami with the series tied and the advantage of field on your side.
Center Hassan Whiteside was once again the best in the Heat’s inside game by achieving a double-double of 13 points, 13 rebounds, recovered three balls, lost four and made three blocks.
Sudanese forward Luol Deng reached 12 points, grabbed six rebounds, recovered two balls and made a block, which this time could not avoid the defeat of the Heat, who reached the middle of the fourth period with a 70-77 lead, but as it happened in the first game, they couldn’t keep it until the end of regulation time, and in overtime the Raptors dominated.
The game was tied (80-80) with 2:01 remaining after Ross made a jump shot.
DeRozan missed a pair of free throws with 1:22 left, but Valanciunas grabbed the rebound after shooting the second and made the go-ahead basket, which was widely seen as decisive in changing the momentum of the game and the marker control.
Both teams kept altering the score and the decisive draw in regulation time that ended with the score of 86-86.
The Heat did not have their best control of the ball and lost it 11 times in the first half that the Raptors converted into 14 points and dominated with a run of 48-41.
The Miami team tied the record for first-half turnovers in playoff competition, set in 1997 when they faced the Chicago Bulls, and finished the game with 21, something Heat coach Erik Spoelstra said that it could not be repeated in the third game.

You can also read:  Durant and Harden join forces at NBA gala night