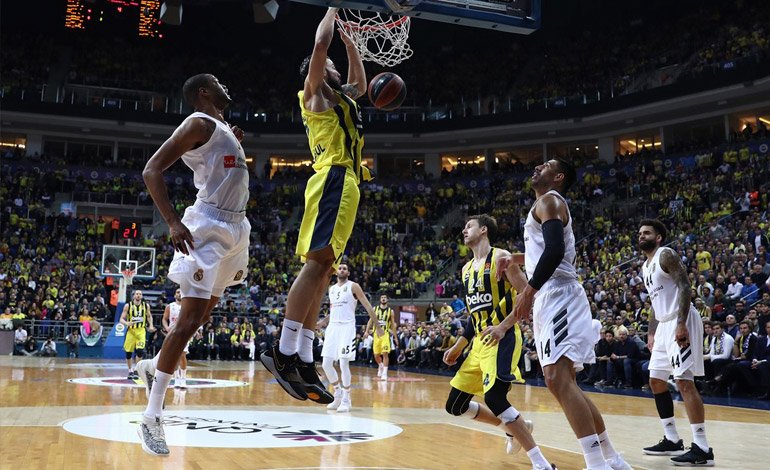 Real Madrid missed a golden opportunity to knock Fenerbahce down in the Euroleague and, incidentally, snatch the lead on the last day of the first round in Istanbul, where an adverse 7-0 set in the last two minutes threw to lose the great work of the whole team (65-63).

The whites, who recovered from their bad first quarter and had the game in hand, were about to repeat the triumph of last season and thus close the year in Europe in a big way, but ended up falling in the reissue of the last Euroleague final victims of their bad decisions in the decisive minutes.

The fierce defense imposed by the leader of the tournament blinded all the routes to a Real Madrid that chained errors, found no solutions in attack and lost the fight for the rebound. Only Anthony Randolph was able to see the rim twice in the first four minutes of the game.

The Czech Jan Vasely imposed his quality and power under hoops and the Italian Luigi Datome was exhibited with baskets of merit, which kept the Turks with comfortable advantages until he woke up a Jaycee Carroll who, with the first two triples of his team, could set the score at six minutes (11-10).

Then came a new local arreón that coincided with a white blackout in attack, which translated into a partial of 11-2 that allowed the maximum advantage up to that moment at the end of the first act (22-12, min 10).

The panorama changed radically in the resumption. Real Madrid got into the crash based on hard work behind and their greater determination in attack. An unsportsmanlike attack on Marko Guduric was taken advantage of by Pablo Laso’s men to score five points that culminated in an 8-0 run with which they put fear in the bodies of the players led by Zeljko Obradovic.

In this phase of the clash, the three triples of an infallible Rudy Fernández, who led the reaction at the Ulker Arena, were decisive. The reigning champion continued to grow and, after many minutes behind, was able to tie at 32 in the last play of a second act in which he defeated the Turks on the scoreboard (20-10).

You can also read:  Harden wins the duel to Curry

In the resumption, the defenses continued to prevail over the attacks, which resulted in few baskets and successive draws. Several recoveries by Facundo Campazzo and the points and rebounds of Gustavo Ayón allowed Real Madrid to take the lead for the first time since 0-2 thanks to a basket by Sergio Llull (41-42, min 28).

The techniques for protesting Pablo Laso and Llull himself, who was expelled, slightly off-center the Madridistas, who ended the third quarter losing by four points (48-44, min 30).

Ali Muhammed, with seven consecutive points, kept the hosts on low income from the start in a tense final ten minutes. Jaycee Carroll and Rudy Fernandez responded instantly. The Spaniard, with a new triple, put his team up four in the middle of the final act, forcing Obradovic to stop the game.

Doubts gripped the Turks, unable to overcome the barrier raised by a grown rival, who increased their performance as the minutes passed and played with one more march at the decisive moment, under the baton of Campazzo.

When everything seemed done, he scared Guduric with a triple with 1.40 left and Vesely left one with half a minute to play.

Two consecutive failures by Thompkins, with a triple that did not touch the rim and another error in a shot close to the Turkish basket, sentenced his team, which with a partial against 7-0 in the last two minutes ended up leaving the victory and the leadership in Istanbul.

Incidents: Match of the 15th day of the regular phase of the Euroleague and last of the first round, played at Ulker Sports in Istanbul before 12,872 spectators. EFE