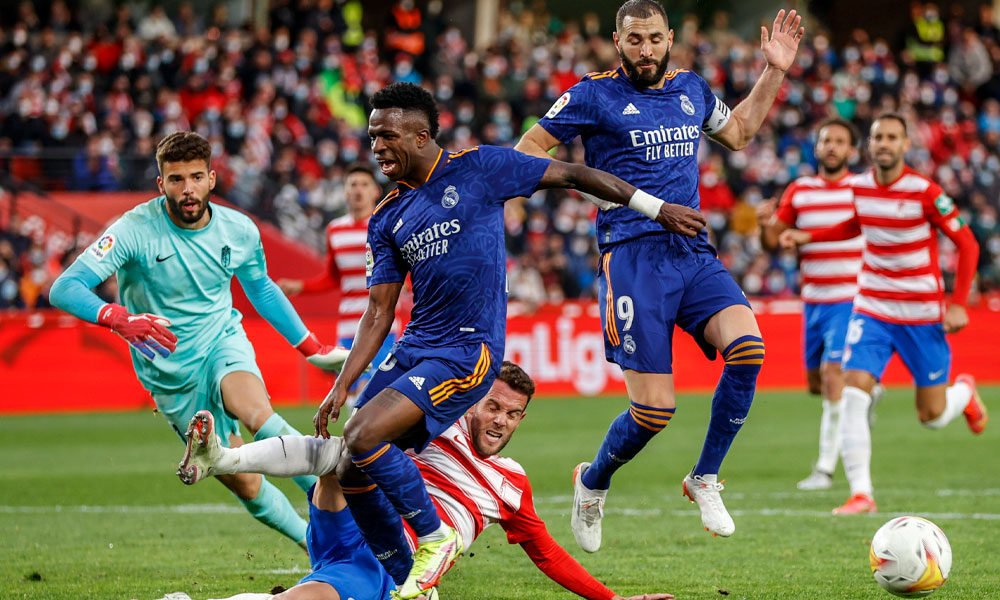 Real Madrid achieved their third consecutive victory in LaLiga Santander by beating Granada 1-4 at the Nuevo Los Cármenes Stadium, which suffers its second consecutive defeat and is unable to move away from the relegation places.

The goals of Marco Asensio and Nacho Fernández put the Madrid team ahead, Colombian Luis Suárez reduced differences for Granada before the break, and certified the white victory in the second half Vinicius Junior and French Ferland Mendy, this when Granada he played with ten for the expulsion of Monchu.

Except for the final stretch of the first half, it was a placid game for Real Madrid, which was even able to give some of its main players minutes of rest against a struggling Granada and who had his options, although he was sentenced after being sent off by a direct red card. Ramón Rodríguez ‘Monchu’ in the 67th minute, which also cost coach Robert Moreno the expulsion, for protesting.

Real Madrid dominated the first section of the game, although only Frenchman Karim Benzema put Portuguese Luis Maximiano in trouble with a bitten shot after a good white attack on the right.

When Granada began to equalize the contest, having more the ball and finding its attacking players with balls into space, the visiting team scored two goals in just six minutes, between 19 and 25, both originating in the German’s boots. Toni Kroos.

You can also read:  The CAS forces LaLiga to cede the players to their national teams during the FIFA date

In the 0-1 he put a perfect ball to Marco Asensio, who caught the local defense out of place and with suspense beat Maximiano (19) in hand-to-hand, while in the 2-0 he assisted Nacho, the great novelty in the white eleven, in a perfect strategic action in a corner kick.

Granada reacted after half an hour of play, just when Alberto Soro took the ball under the sticks topped by Marco Asensio in a clear against Real Madrid that was about to be 0-3.

After a loss by Real Madrid at the start from behind, Luis Suárez, just four minutes later, caught a ball in the front of the area and his shot touched the Brazilian Carlos Casemiro and threw Belgian Thibaut Courtois off the track to become 1-2 .

The clash went crazy in the minutes before the break, with the locals bordering on the equalizer in two poorly executed shots by Joaquín Marín ‘Quini’ and by Luis Suárez himself.

Real Madrid, who in the blink of an eye was subjected to a duel that they had very controlled, also forgave just before intermission after a great play by Benzema, who ran into a sensational save from Maximiano.

The team led by Italian Carlo Ancelotti came out in the second half determined to avoid surprises, in an authoritarian plan with the clear objective of sentencing the crash.

He was close to achieving it with the chances of Dani Carvajal, Kroos and the French Ferland Mendy, and he did it with the goal of the Brazilian Vinicius Junior after the assistance of the Croatian Luka Modric in a counterattack well carried by Benzema, who took advantage of the injury of the local Víctor Díaz at the start of the play.

That’s when the game was over, first because Granada no longer had the capacity to react, despite Luis Suárez marring the 2-3 option, and second because the locals were outnumbered in the 67th minute.

The referee Martínez Munuera rigorously sent off Monchu with a direct red for a tackle on Vinicius, also being sent off later for protesting coach Robert Moreno.

Until the end, Real Madrid dominated the clash at will, Maximiano preventing Vinicius and Rodrygo Goes from extending the score, something that Mendy did in the 76th minute after a measured assist from Casemiro.

You can also read:  Boca asks to play classic with San Lorenzo after anticovid quarantine

Before the conclusion, there was time for Ancelotti to rest Modric, Kroos, Vinicius, Benzema and Alaba, apart from the Brazilian Eder Militao who did not play any minute, for Jesús Vallejo to make his league debut this season, for Maximiano to avoid a greater thrashed since Courtois shone in a header from Jorge Molina.

Referee: Martínez Munuera (Valencian Committee). He sent off Monchu with a direct red for an entry to Vinicius (m.67) and local coach Robert Moreno (m.68) for protesting. He admonished local Montoro (m.62) and visitor Isco (m.80) with yellow card.