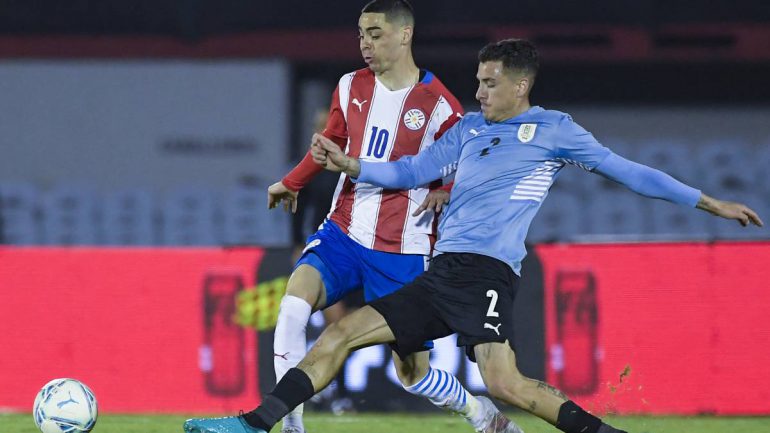 Conmebol made the decision to “indefinitely suspend” Colombian referees Nicolás Gallo and Miguel Roldán for having made serious mistakes in the South American qualifying game between Uruguay and Paraguay, which took place at the Montevideo Centenario.
It is worth remembering that this sanction occurs after a non-existent offside was sanctioned against Uruguay in the match. Despite the fact that there was VAR, these two referees, who were in charge of the technological tool, made the mistake that sparked controversy.
“The actions of Mr. Nicolás Gallo, VAR referee, and Mr. Miguel Roldán, assistant referee, appointed for the Uruguay vs. Paraguay, have been technically analyzed by this Commission, concluding that they have incurred in serious and manifest errors in the exercise of their functions in the development of the match mentioned above, “says the Conmebol statement.
Given this error, the Referees Commission decided to resolve: “Suspend referees Nicolás Gallo and Miguel Roldán for an indefinite period of time in the exercise of their functions in competitions organized by Conmebol.”
Statement from the CONMEBOL Referees Commission
Diego Godín criticized this Thursday the decisions of those in charge of the video arbitration, after the technology was used to annul a goal, for alleged misplacement, of his team (Uruguay) against Paraguay, in a match on the seventh date of the South American qualifier for Qatar-2022.
The captain of the Uruguayan team, Diego Godín, tweeted a video of the play with the words “Shame @CONMEBOL”, while defender José María Giménez did the same and wrote “There is something that I am missing, you see…”.
“If we continue like this, we are going to have to put a VAR of the VAR, because it cannot be,” said Professor Washington Tabárez in an interview with the platform of the Uruguayan Football Association, AUF TV, after the 0-0 draw of the teams charrúa and guaraní at the Centenario stadium in Montevideo.
One of the great controversies of the match in Montevideo occurred when sky-blue striker Jonathan Rodríguez scored a goal that was disallowed at the request of the first line and, after a VAR check, later, due to an advanced position by Matías Viña.
But Viña, who was offside, did not participate in the goal play. “When a player is ahead, the ball does not reach him or is not directed at him, an offside cannot be sanctioned,” Tabárez said. “The shirts were well distinguished. The forward player was Viña, and the position of (Matías) Vecino, who was the one who received the rebound or the one who continued the play, was totally regular”, he insisted.
Also the former Argentine international referee Javier Castrilli spoke through Twitter with several posts. “I do nothing but repeat Rodríguez’s goal and I can’t believe they have canceled it… TREMENDOUS (…) It is hard to accept that they are so wrong with the VAR,” he wrote. “If something so clear cancels you… Nicolás Gallo (VAR becomes NOTHING RELIABLE,” Castrilli insisted on the Colombian referee in charge of video arbitration. (GG) (Week)